Maddox is approaching his goal of bench pressing 800 pounds. 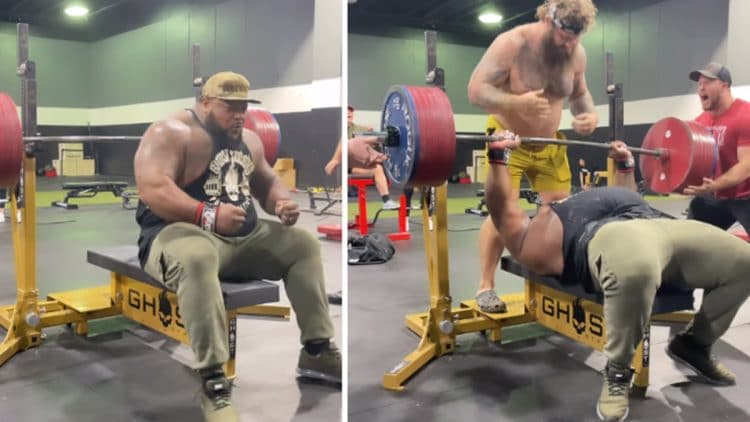 Powerlifter Julius Maddox currently holds all time world record bench press of 355-kilogram (782-pound), which he set back in February of 2021 at the World Raw Powerlifting Federation (WRPF) Hybrid Showdown III event. Julius Maddox is the man to beat at the bench press, as he recently put on a stellar performance once again. On May 10th, Maddox shared an impressive feat of strength on his Instagram by hitting a colossal 361-kilogram (796-pound) raw bench press PR in training.

During the lift, Maddox was wearing a lifting belt and wrist wraps and is assisted by three spotters. Nevertheless, it would appear that the bar remained in motion up until the lockout, with the exception of the pause at the bottom. Maddox is no stranger to impressive bench press feats. As less than a month ago, he crushed a 317.5-kilogram (700-pound) bench press for four reps.

See the bench press below:

I’ve missed this weight +10 times. Hearing my little girls ask me when I will hit 800lbs is enough for me to lay it all on the line. This is bigger tan a title for me. It’s about the long lasting impact I leave for my kids and family. The times they fall on hard times and need some motivation! God gave me this gift to show the world his power that can take a ol junkie like me and do great wonders! 800+ soon!

Since Maddox focuses 100% on bench pressing, he has never squatted or deadlifted during a competition. It is the next goal he has outlined to become the first man in a sanctioned competition to bench press 800-pound raw.

This will be Maddox’s third time lifting 800 pounds. He attempted the lift for the first time in June of 2020, but the misloaded barbell turned out to be the problem. On June 10, 2021, he had the opportunity to attempt the feat again, and the bar was fully loaded with proper weight, but he had trouble pulling it up.

Maddox has been training under the guidance of renowned strength trainer Josh Bryant from Jailhouse Strong to accomplish this goal.

Danial Zamani, an Iranian powerlifter, is the only person who comes close to Maddox. Zamani becomes the first individual to unofficially lift the 800 pounds bench press raw. On February 21, 2022, during a training session, Zamani recorded a raw bench press weight of 365 kilograms (804.7 pounds). Zamani, who competes as a superheavyweight, would have broken the record if he did the press during a sanctioned competition.

A bench press battle between Maddox and Zamani was supposed to take place at the 2022 Iron Wars V, but a variety of reasons prevented that from happening.

In addition, as part of a recent training session, Maddox performed a 351.3-kilogram (775-pound) squat using a Kabuki Transformer Bar. A noteworthy aspect of the lift was that he did not wear a lifting belt or knee sleeves.

The bench press has become a specialty of Julius Maddox since he began lifting in 2015. It wasn’t clear what Julius Maddox weighed at the time of the lift, but he competes at around 450-lb (204-kg). The date for Julius’s next competition has not been determined, but judging by his recent training session, it looks like he will be well prepared as he steps on stage.

Julius Maddox is still pursuing his goal of becoming the first person in an official powerlifting competition to bench press 800 pounds. The training footage he submitted can attest to the fact that he is the most qualified athlete to claim this achievement.