Rudy Kadlub is closing in on his peak shape just 2 weeks out of his next competition. 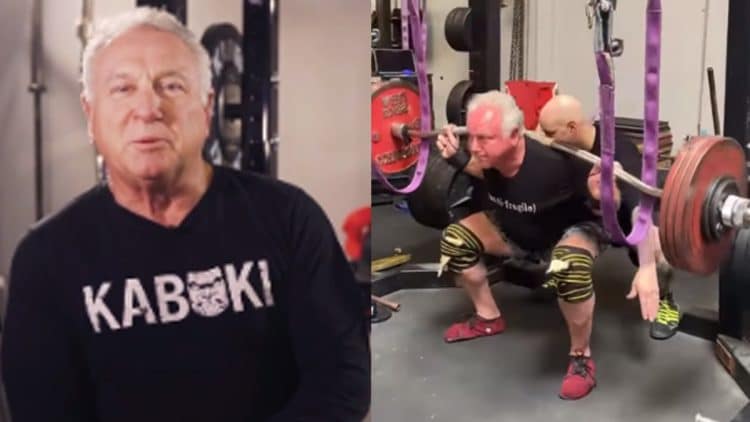 Longevity in any sport, especially powerlifting, is one of the hardest things to achieve, but when done properly, the outcome turns out amazing. Rudy Kadlub is one of the greatest examples, and he is sharing his methods with the world. At 73-years-old, Rudy is claiming some massive lifts, which the majority of people can only dream of. As the preparation for his next competition is coming to an end, Rudy Kadlub shared a gigantic 430-pound (195-kilogram) squat double on his Instagram.

Rudy used a lifting belt, knee wraps, and wrist wraps to aid him in the lift. He was also using a Duffalo barbell, which is significantly bent, as opposed to the normal straight bar. This specialized bar does not make the lift easier, but it helps ease the pressure which is exerted on the joints. Rudy is well aware of this, which is why he is one of the most consistent powerlifters in the world. In the comments of his video, Rudy explained that he also grips the bar with only two fingers because of his lack of shoulder mobility.

“This bar is easier on my shoulders as I ramp things up in preparation for competition in just a few weeks — sustainability is the goal when your joints have some training mileage. Squatting with the Duffalo feels very similar to squatting with a straight bar, but that curve makes it far less harsh in terms of the rotational demand it places on my shoulders.”

Rudy Kadlub will compete at the 2022 USPA Drug Tested National Championships, which will take place from May 27-31, in Atalanta, Georgia. He won this competition last year, so his aim will be to defend the title.

Rudy Kadlub At A Glance

Rudy Kadlub started his professional powerlifting career at the age of 57, but he has consistently been competing for the past 16 years. Throughout the years, Rudy took part in 37 sanctioned contests and got a gold medal finish in 31 of those. Most impressively, he is currently on a 22-win streak, and looks to continue adding to it in the future. Rudy is mostly competing in the 100-kilogram weight class.

In just two weeks, we will see how much improvement Rudy Kadlub has made and if he will be able to claim some World Records. It is clear that Rudy is very experienced and knows how to take care of his body while pushing himself to the limits. He has not yet taken part in a competition this year, so the upcoming performance could be insanely good.