'The Predator' shares his most effective shoulder exercises for 3D delts 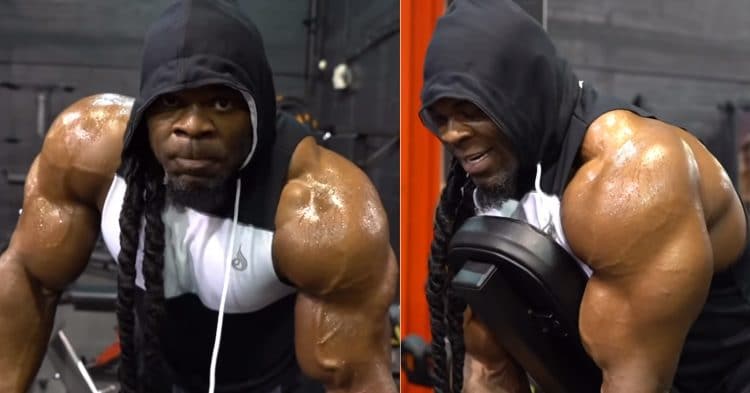 Kai Greene has been pretty active (and generous) lately, sharing some of his elite-status workouts. ‘The Predator,’ who placed second at the Olympia in 2012, 2013, and 2014, shared his most intense arm workout earlier this month.

We also got to see what his current physique looks like in a recent posing video he released on his YouTube (relatively new channel). This would definitely lead many to believe that he’s planning a return to the big stage which he explained is “very possible,” last year. But chances are, he’d only do it if he knew Phil Heath, who defeated him all three times, would be coming back too.

This would likely be his last shot at overcoming ‘The Gift’ to cement his name as one of a few Mr. Olympia champions. And with the Olympia being confirmed for mid-December now, both will have plenty of time to get ready if this thing is going to happen.

However, nothing is a guarantee right now but it’d be a nice end to the year especially with the unfortunate situation currently. But anyway, let’s get into the shoulder workout…

So as you’d expect, Kai Greene started off the video with plenty of personality and a little humor, jokingly calling the episode “getting it done under crisis“. Then, he quickly got into the training session which consisted of a complete shoulder workout with some interesting and beneficial exercises.

Be sure to do a warmup and then you can dd a little weight for each exercise thereafter depending on your experience level, of course.

The first exercise Greene showed was an off-kilter rear delt exercise where he placed his feet on the seat of a bench and performed a variation of supported straight-arm reverse raises, followed by bent-arm flys. He did 30+ reps for the warmup set to get the blood flowing.

This exercise works the read delts, traps, rhomboids, and other muscles located on the upper posterior chain (backside of the body).

After the set, he explained that because the bench is right in your solar plexus, you have to control your breathing. This helps to supply optimal oxygen during the exercise and also prevents you from passing out. “The worst thing you can do is try to hold your breath,” he said.

Greene then transitioned over to the cable machine to do a standing reverse fly variation with the handles attached high to take advantage of different angles.

Greene utilized this exercise to “get some different angles going“. So he set up the cable pulleys high up on the machine and did one set.

During the third set which is exercise #1, Kai Greene got a little philosophical which isn’t out of the ordinary for him…

The way we avoid doing that is by remembering why we’re working, why is it important, why we’re doing this work in the first place.”

This exercise similar to exercise #1 but this time, Greene actually sat on the seat so that the bench (angled) supported his entire torso.

The upright cable row is a very effective exercise for hitting the delts and traps. However, you want to be careful with this movement as it can cause shoulder impingement issues due to the shoulder rotation. Don’t go too heavy and if you feel pain, stop.

“Now the secret with doing this movement isn’t just to get lost. Every rep, every set counts, and the only way you can milk the benefit is to squeeze. You got to think about the muscles that you want to hit and squeeze. Think about what they’re going to look like when you’re done working and squeeze.

“These traps, rhomboids, rear delts… I need that on my physique,” he said after the last set for the rear muscles. “That’s one of those areas that I need to focus on even if I’m just playing around“.

And then, he moved on to the front and side delts.

Front and side delts

To hit the front or anterior and side or lateral delts, Kai Green leaned his back up against an angled bench and performed 10 reps of front raises followed by 10 reps of side raises.

Then after he finished tying his fancy shoes that he showed off, Greene began the next set, increasing the weight.

To vary up the angles, Greene performed the side raise with his arms hanging behind his body. He then followed this up with a front raise variation where he touched the ends of the dumbbells together for a better contraction.

This exercise concluded the workout and Kai Greene had more words of wisdom to finish off the session.

“You can’t become the best in yourself unless you learn how to call and respond accordingly. You can’t depend on somebody else to tell you when you need to be responsible and accountable with how you use the resource that is yours.”

“I need to take a little bit more time with listening to me, hearing me. That stuff is real and that is something that has taken me a long time to really understand as vividly as I do. But because I have it, I’m able to discipline my thinking, turn off my feelings if need be. Overcome the challenges of how I feel when they present the obstacles that don’t allow me to see things clearly.”

“And because I’m able to do that I’m able to redirect my thinking to where I want it to be. This is a thinking man’s practice.”