The three-time Arnold Classic winner looks to be pushing the pace at the gym. 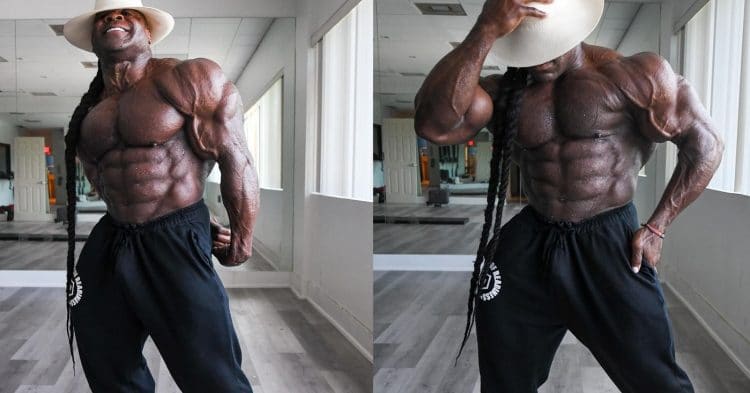 Legend Kai Greene is known for his giant body of work and mountainous physique. While the 3x Arnold Classic winner has stepped away from bodybuilding competition, after posting on social media, Kai Greene’s physique still looks amazing.

Greene’s build looks incredible. While a plan to return is not currently on the table, the 46-year-old legend is crushing it in the gym. Therefore, a return should certainly not be weighed out of the equation at this point either. Kai Greene is known for turning heads on social media with his big workouts though sometimes his physique updates do the same.

Depicted in Greene’s pose on social media, the bodybuilding legend is a marvel of the sport. The striation development on his pectoral muscles is impressive and his abs look full and defined even in his twilight days.

With the rabid fanbase that Greene has inspired in recent years, many are hoping to hear him say the words “I’m Back”. Even at 46-year-old, a body as chiseled as his would be a definite threat in competition with some added discipline. Additionally, a return for Greene would give him ample opportunity to make good in his rivalry against the 7x Mr. Olympia champion Phil Heath.

Kai Greene turned pro in 2005. While his accolades are numerous, he was never able to capture the elusive first place title of Mr. Olympia. Mr. Olympia is known as the most prestigious and challenging bodybuilding competition in the world.

When it came to the second-most prestigious competition, the Arnold Classic, Greene dominated. The American managed to secure the first place position back-to-back in 2009 and 2010. Eventually, Kai Greene would earn a third Arnold Classic title in 2016.

Even at 46-years-old, it’s glaringly obvious that Kai Greene still has some gas left in the tank. Despite not currently competing, Kai Greene’s physique looks incredible.