Fitness influencer Kali Muscle targets the sport of bodybuilding after the recent death of the late Cedric McMillan, "Ya'll are using these guys as Guinea pigs". 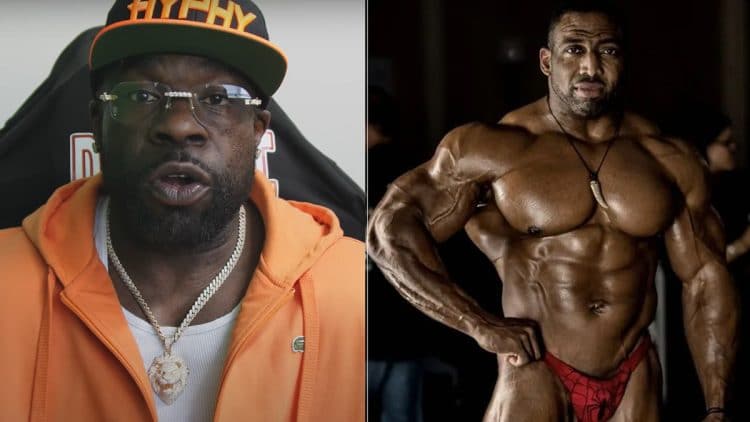 From serving time in prison to a successful career as a fitness influencer, Kali Muscle, real name, Chuck Kirkendall is no stranger to adversity and hardships. In a recent video on his YouTube channel, Kali forewarns pro bodybuilders of the inherent dangers associated with the sport.

Kali Muscle has been widely recognized as a fitness icon courtesy of his ripped physique. He parlayed his online success into a stint in Hollywood. Kali was featured in Wonder Woman (2011), The Dog Who Saved The Holidays, and also took part in some TV roles. Given his prison-to-success story, Kali remains a motivational figure inside and outside of the fitness industry. The famous online entertainer suffered a heart attack last year due to his left artery being 100% clogged.

With the growing number of deaths in pro bodybuilding, many are starting to question what can be done to improve the dangerous climate. It appears heart issues have become a significant concern in the sport. 2018 Mr. Olympia Shawn Rhoden passed away from a heart attack last Nov. Dallas “Big Country” McCarver also passed away from heart issues. McCarver’s autopsy explicitly stated that an ‘un-witnessed acute cardiac event‘ occurred and his heart was three times the size of a normal heart. The list goes on, as Classic Physique and 212 bodybuilding veteran George ‘Da Bull’ Peterson also died just days before performing at 2021 Mr. Olympia.

In light of the late Cedric McMillan’s tragic death, Kali Muscle is forewarning bodybuilders of the terrible dangers he perceives with taking performance-enhancing drugs.

In a recent YouTube video, Kali Muscle looks back on his experiences with PEDs in 2009.

“I didn’t never know about steroids until I was 34 years old in 2009. I was always scared of having health problems. I had a fear of having heart attacks, strokes. I seen all the old school bodybuilders like Mike Mencer, Andre Munzer, even Arnold had heart problems. You know, Sylvester Stallone, all these people that were jacked were having health problems. I noticed it then. That’s why when I would do performance enhancing stuff, I would do it like 5-6 months out of the year.” Kali Muscle shared.

Kali is adamant that without proper medical care and insurance, bodybuilding wasn’t a venture worth pursuing further. In addition, the fitness influencer highlighted how dangerous bodybuilding can be regardless of age.

“Bodybuilding, the reason I said it must be stopped. Firstly, there’s no medical. These guys taking all these health risks and as we see they die in their forties. You see, I almost died. And I didn’t know about steroids until 34. I was like, I’m a late bloomer, maybe it won’t happen to me because I’m not going to over do stuff. Like I said I was a late bloomer. Now you got guys that are 15, 16 years old doing steroids, which is stupid to me.”

While higher level athletes can afford chemists and have access to health screenings and tests, Kali maintains those benefits are not readily available for the majority of bodybuilders.

“So everybody, you know, only a select few that I know of that did it [steroids] right. Those were the elite that had a guru. I know like Hani, and George, those guys make those guys get tested. They want to see their bloodwork but the majority, 95% don’t. Because we’re scared, I was scared to go to the doctor to get a physical. I don’t want him to tell me something I don’t want to hear.”

After winning a bodybuilding show, Kali says gurus of the sport contacted him and gave him a list of ‘foreign objects’ he would need to inject in order to ascend to the top of the sport.

“I took overall, won overall, all the gurus contacted me and sent me a list of foreign objects that I will have to inject in my body. I said, “I’m done.” It don’t make sense bro. I come from an environment was about money. Everything was to progress financially. Not regress, not risk your health. You know what I mean, I had lived through all my violent little tirades and so I’m like why would I risk my health now that I made it out of prison and shootouts, stabbed and all this stuff.

Ya’ll are using these guys as Guinea pigs. Because that’s how I look back, you like, you a test dummy. Taking all these roids, HGH, IGF, Insulin, and I thought there was some money to be made so I was involved in it. I did over 14 shows and I lost a substantial amount of money. Maybe over a million. You have to fly yourself to the show. You got to get the hotel, you got to take all these roids, and take all this food.” Kali shared.

Kali Condemns Bodybuilding, “It’s the Most Unhealthy Sport There Is”

According to Kali, bodybuilders are packing on too much mass in the offseason and hurt their health by taking Clenbuterol and T3 to trim down for shows.

“Guys are puffy now, they don’t look cut like the guys did in the 80s. They don’t have the beautiful physiques. They do an offseason where they get all puffed up and messed up they health. Then they trim down, and mess up they health more because you got to take Clenbuterol and T3 to trim down. It’s the most unhealthy sport there is. If you want to call it a sport. It’s just terrible, there’s no purpose for it bro. I see bodybuilding on its way out. Phasing out and I agree, too many people die bro and for what? They dying broke. Then you got to do a GoFundMe, because they don’t have life insurance and it’s only a $100 a month. I don’t want to pinpoint the people personally that have health problems because of bodybuilding but it’s sad bro to see them go through this pain and heart attacks. It’s pointless.”

Kali Muscle issued a warning to pro bodybuilders and mentioned that he’s lucky to have lived through his recent heart attack. With so many high-level bodybuilders dying, Kali believes men could still be alive if they weren’t competing in the sport.

“It just reminds me of friends I lost in the street life. I look back now and this man died over owing somebody $100 bucks, $500 bucks. Here we are we died just to have unnatural looking muscles. All you bodybuilders out there, quit bro. You going to die. You’re going to die…young. Simple as that. I was 46, I was lucky to live through it. I had my heart attack the same day as Shawn Rhoden. I just didn’t want to announce it because I don’t want to overshadow his death or whatever. Men could still be alive. Cedric, Shawn, George Peterson, ‘Mountain Dog’ [John Meadows], the list goes on.”

“So with that man, I’m done because this is just, it’s just sad man. Cedric died the other day and of ego. You know, I see videos, he knew he had health problems, he tried to warn you. He was letting us know man. He was a messenger. So that’s what I am to you guys. A messenger.”

RELATED: Kali Muscle: From The Cell Block To A Fitness Superstar

While he never won any major bodybuilding titles, it’s clear Kali Muscle has a vested interest in those participating in the sport. As a victim of heart problems, the fitness influencer believes the late Cedric McMillan and himself are messengers forewarning athletes about the dangers that lie ahead. Kali Muscle is speaking out in hopes to inspire change in a sport he believes is killing people.