'The Boogieman' and Michal Krizo are looking freaky shredded days before battling on the 2022 Mr. Olympia stage. 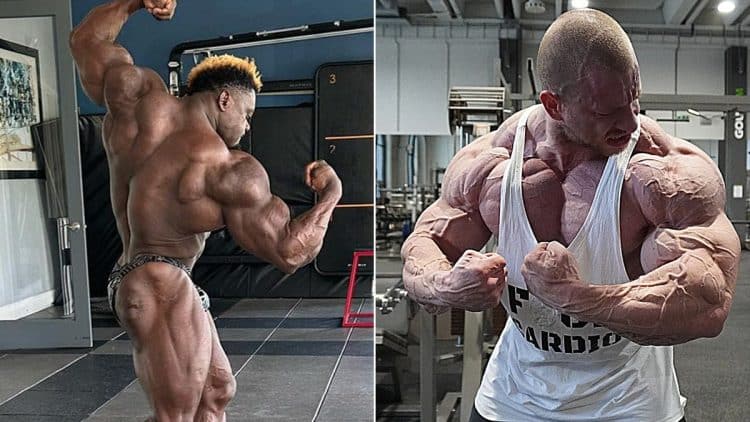 Peak week has officially begun and bodybuilders are wrapping up the final stages of preparation for the 2022 Mr. Olympia contest, set to start on Thursday (Dec. 15 – 18). Days before the event, rivals Blessing Awodibu and Michal ‘Krizo’ Krizanek shared impressive physique updates.

The IFBB saw plenty of stars emerge this year, one of which was Blessing Awodibu. The Nigerian native was trying to redeem himself after an unsatisfactory 2021 season. At the time, Blessing was criticized for his lack of leg development, which he’s focused on correcting over the past several months.

In May, ‘The Boogieman’ showcased dramatic improvements while winning back-to-back pro shows. At the 2022 Indy Pro, he avenged his third-place finish the year prior and won gold. The very next week, Awodibu claimed first place at the New York Pro before shutting down the season to focus solely on his Mr. Olympia debut.

Another Men’s Open powerhouse to steal headlines throughout the season was Slovakia’s Michal Krizo. Upon switching to the NPC, figureheads of the sport like four-time Mr. Olympia Jay Cutler and guru Milos Sarcev immediately took notice of him.

While some thought Krizo was artificially hyped up, he proved the naysayers wrong with his physique in October. He earned his IFBB pro card in just one month and secured an invitation to his first Mr. Olympia contest by winning the 2022 EVLS Prague Pro.

Before Krizo turned pro, he faced Blessing Awodibu at an amateur bodybuilding contest. He was outmatched by Blessing’s conditioning then but made it clear he’s long surpassed Awodibu as a bodybuilder. They’ve engaged in a rivalry ever since. Days before they run it back at 2022 Mr. Olympia, Awodibu and Krizo are sharing their latest physique updates.

Awodibu shared a ripped update in the company of his coach George Farah. He captioned the image “4 days out.”

Both of Farah’s clients have won two pro shows this year and are scheduled to make their debuts on the Olympia stage. Farah discussed an Andrew versus Blessing showdown back in Oct. He sees Jacked winning that battle if they both come into the contest at 100 percent.

“Best of luck to every athlete competing this weekend at the superbowl of bodybuilding @mrolympiallc Las Vegas.
It’s peak week folks

. It’s ain’t easy to do what we do. Now all the hard work is done it’s time to have some fun.” Blessing Awodibu wrote.

Awodibu never shies away from a rivalry with a fellow bodybuilder (he had one with Nick Walker during his rookie season). A few months ago, he engaged in an argument with seventh-place 2021 Olympia finisher Iain Valliere. Blessing argued that shape and aesthetics should be favored more than muscle mass at shows.

Despite having yet to perform on the Mr. Olympia stage, many veterans have already backed Michal Krizo as a legitimate threat in the Open class. Earlier in the season, bodybuilding legend Jay Cutler predicted Krizo had the potential to break into the first call-out at 2022 Mr. Olympia.

Samir Bannout, a former Mr. Olympia winner from 1983, suggested that Krizo could win this year’s Olympia show on his first attempt but would need to bring enough conditioning and muscle density. Regardless of the speculation, Krizo has attacked his prep furiously. He’s shared multiple workouts and posing sessions leading up to his debut.

In just a few days, fans can expect a war from rivals Blessing Awodibu and Michal Krizo on the 2022 Olympia stage. Considering how much talent is expected to compete, many are predicting this contest to be one of the greatest in Olympia’s history.