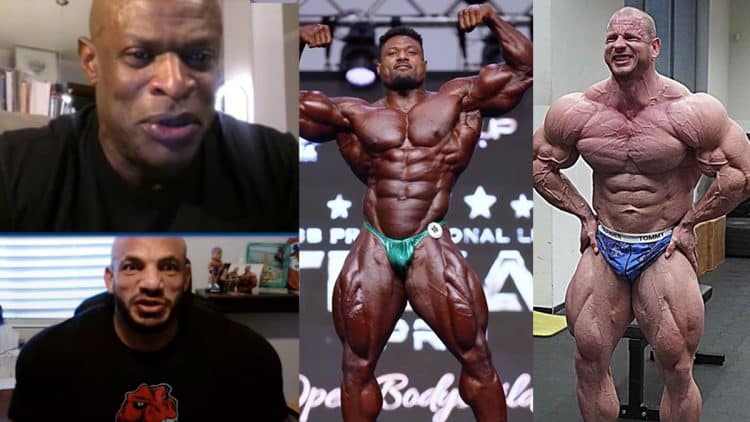 Ahead of his next title defense, two-time Mr. Olympia Mamdouh ‘Big Ramy’ Elssbiay spoke with bodybuilding legend Ronnie Coleman. During the interview, Elssbiay revealed his top four at the 2022 Mr. Olympia and named a few wild cards that are likely to shake up the contest.

The 58th annual 2022 Joe Weider’s Olympia Fitness & Performance Weekend takes place later this week, which serves as bodybuilding’s most important event of the year. Headlining the show is Egyptian champion Mamdouh ‘Big Ramy’ Elssbiay, who has successfully held the title since earning the honor back in 2020.

Earlier this year, Ramy missed out on a guest posing appearance at the 2022 Pittsburgh Pro. Reigning 212 Olympia champion Derek Lunsford filled in for Ramy and eventually stole the show with his shocking size and fullness. After the absence, Elssbiay spoke with Dan Solomon and the Olympia brass, where he vowed to bring his absolute best in December.

Throughout the season, Ramy restored the public’s confidence in him following a series of physique updates. In fact, at one point before ending the off-season, the reigning champion showed off his frame weighing a massive 337 pounds. Even though Ramy has dealt with some setbacks, he’s more determined than ever to retain his status as the number one Men’s Open bodybuilder on the planet.

Days before taking to the stage, Big Ramy spoke to eight-time Mr. Olympia winner Ronnie Coleman. They discussed Ramy’s passion for the sport, wild cards at the upcoming event, and who he believes will finish in the top four this weekend.

Big Ramy considers Hadi Choopan, Brandon Curry, and William Bonac as the most dangerous this year.

The reigning champ labeled this show as one of the most exciting ever because of how difficult it is to predict the outcome.

“I don’t like to talk about myself, but I can say for the other people. I can say Hadi [Choopan], he will be fine. And also Brandon [Curry] — he will be dangerous,” says Ramy. “It’s the most exciting show I think in the history because I think nobody knows who is going to win.

Nobody knows who will be on the stage in the best condition. As for Nick [Walker] and Hunter [Labrada] — I love those guys. There’s a lot of guys,” Ramy said. “I don’t like to change my diet after the shows for two months. I change the diet after the two months. I love to be in shape all the time.”

One wild card Ramy threw out to Coleman this year was Derek Lunsford.

“I can say he [Derek Lunsford] will be dangerous, very dangerous if he comes in shape. From some of the videos I saw, he needs to keep the size. The game is not [all about] that. It’s more important to come in shape. I believe Hany Rambod is smart. He will bring him in good condition. If he does that, he will be in the top six for sure.”

In mid-Sept., Lunsford accepted a special invitation for the 2022 Mr. Olympia contest to compete in the Men’s Open division (formally held for seven-time 212 Olympia Flex Lewis). According to Big Ramy, if Lunsford is in shape and brings good condition, he could easily find himself battling in the top six.

Derek recently spoke with Ronnie Coleman as well. During the conversation, Lunsford laid out how he planned to overthrow the sitting champion. He believes with 100 percent certainty that he can win this year and plans to make history with his coach Hany Rambod later this week.

Before ending the discussion, Ramy mentioned that there are at least 20 guys at this year’s Olympia fighting for only 10 spots.

“We have plenty of guys. There are 20 guys who could be fighting for number one through 10. Yes, I believe myself that I can be number one but also in that aspect, those [other] people are working hard. A lot of these [Men’s Open] guys are working very hard. Also, new guys, they can do some damage on the stage. I believe one thing. I believe I’ll come with a better package. I can’t wait to show the people in the states.”

Given new talent like Slovakia’s Michal Krizo and Andrew Jacked entering the league, Elssbiay says this year’s show will go down as the most exciting in two decades.

“I don’t like to say who can beat that one or the other, because it’s always close between them. Brandon [Curry] or William [Bonac] and all the new people who could step in line — Andrew Jacked… Michal Krizo. I talked with Dennis [James] yesterday. It’s the most exciting show in 20 years.”

Considering the talent slated to compete at 2022 Olympia, even Big Ramy said it’s a tough show to predict. Despite that fact, Elssbiay knows he’s the best bodybuilder in the world and plans to prove it on stage in a few days.