Larry Wheels gives his all to a 1,000lb yoke carry and looks crazy along the way 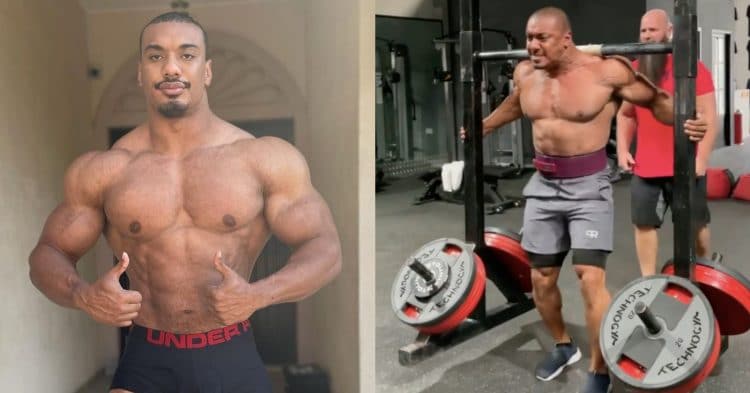 The king of personal records himself, Larry Wheel was back at it again, with another insane feat of strength This one came from a massive 1,000lb yoke carry, which was crazy to see.

It seems that almost every time Wheels hits the gym, he walks away with a new personal record under his belt. Even if that is not the case, you can bet that he gets as close to it as he possibly can.

Without a doubt, Larry is one of the most talented athletes in all of strength sports. Whether it be the traditional SBD lifts of powerlifting, or some form of strongman tasks, he is always up for the challenge.

Most recently, Larry Wheels decided to test himself with a yoke carry. Of course, since we are talking about the PR wrecking machine, you know that he did not just stop with doing your basic yoke.

Taking to Instagram recently, the 26-year old decided to give his best attempt at doing an enormous 1,000lb yoke carry. While this was not the smoothest performance you will ever see, he definitely got the job done.

It is unclear if that was actually a personal record from Wheels, but it had to be pretty close. He was straining the whole time, which makes sense considering just how much weight he had on his shoulders.

The last few months have seen Larry make a return to focusing on strength training, after some time spent learning about arm wrestling. He has been putting a ton of focus into the strongman side of things too.

Not only did he do this massive yoke carry, but Wheels was also seen recently doing a massive AMRAP set of a 312lb log press. He also followed this up with a sturdy 803lb farmer’s carry.

Now over the years, Larry has teased the idea of trying strongman, just like he has with bodybuilding. It is not clear if he is currently working towards competing in this sport too, but he is training like it.

Over the years, Larry Wheels has tried his hand at as many strength sports as he can, and has done well at basically all of them. It is one of the things that makes him so interesting to pay attention to.

If he does find a strongman competition that he wants to compete in, it is going to be interesting to see how he does in this sport. Judging by what we’ve seen so far, he would stack up pretty well against some people.