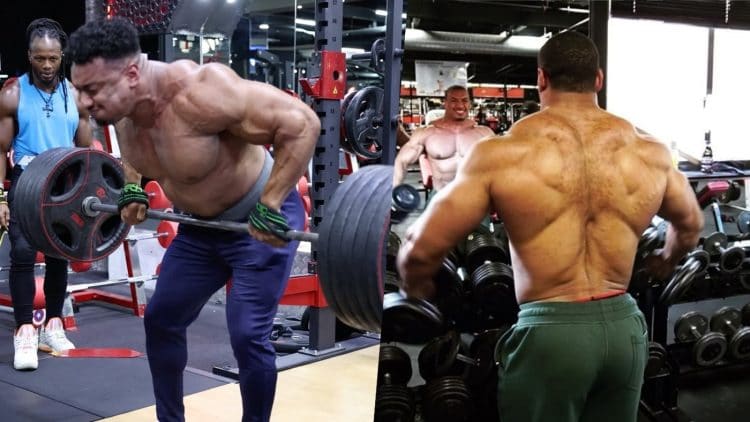 Between powerlifting, bodybuilding, strongman, arm wrestling, and more, it is safe to say that Larry Wheels knows a thing or two about working out. He recently broke down his favorite exercise to use, to get a huge back.

While primarily known for his efforts in the world of powerlifting, Wheels has done it all in the world of strength sports. He is constantly finding himself working hard in the gym and pushing himself to the limit, even getting the nickname of the PR wrecking machine based on his ability to exceed his own personal bests on such a regular occasion.

However it is not just the heavy lifting that he is known for, as he has even stepped on stage as an amateur bodybuilder in the past. One of the body parts that has long stood out on his physique is his wide and bulky back, and with a recent post to his Instagram, he revealed that workout he uses to get such a shredded back, largely comes down to barbell rows.

While Larry Wheels has a massive back, thanks to his time spent in the gym powerlifting, he has been largely spending time working to perfect his craft in the world of arm wrestling. He even had some high profile bouts against Schoolboy, which did not go his way, but showed how strong he really is.

Recently it appeared that he was taking a break from this sport, to return to his roots of powerlifting. However, he announced recently that he was coming back to the sport for at least one more competition, taking on fellow powerlifter Brandon Allen in a match on CoreSports.world this December, that will also feature one-time Hafthor Bjornsson opponent Devon Larratt.

This is a far more compelling matchup than when Larry Wheels takes on legitimate, talented, and experienced arm wrestlers. He has shown in the past, that he is more competitive in these types of matches, considering they are evenly matched.

Between the hefty barbell rows making his back swoll, and the arm wrestling focused training that he will no doubt be doing, it will be interesting to see how he looks in this matchup. Basically anything Larry does at a high level is exciting to watch for one reason or another.