The four-time Mr. Olympia shared why he favors dumbbells for bench press instead of using a barbell: I stick to dumbbells. It's a lot safer in the long run.' 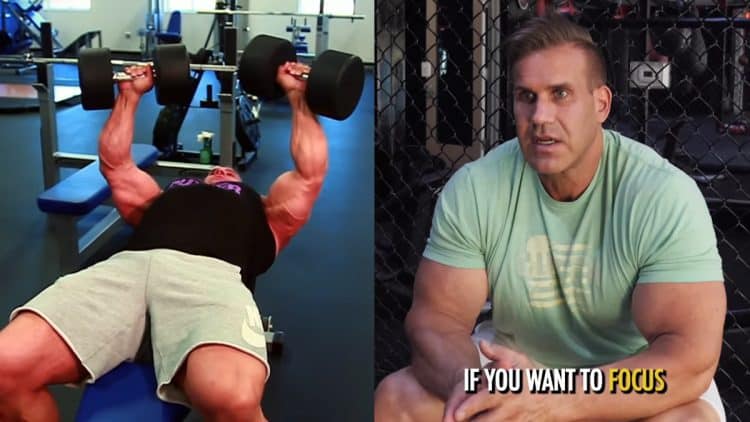 Bodybuilding legend Jay Cutler is widely respected for his training abilities and successful IFBB Pro career. With his spare time in retirement, Cutler recently discussed why he prefers dumbbells on the bench press instead of barbells.

Four-time Mr. Olympia champion Cutler cemented himself with the best in the sport throughout the mid-2000s. His commitment to bodybuilding along with his intense rivalry with Ronnie Coleman helped elevate the sport today. In order to keep up with “The King,” Cutler has talked about the mental sacrifices it took to maintain his position as top two in the world for 12 years.

At 49 years old, Cutler is in tremendous shape and his diet and training regimen reflect that. Last competing in 2010, the Massachusetts native has been happily retired ever since. Just a few weeks ago, however, Cutler had the world questioning whether a comeback could be on the table. He posed with influencer ‘Lexx Little,’ and showed off his shredded physique.

Related: Barbells vs. Dumbbells: Which is Best?

There have been rumors about Masters Olympia possibly returning in 2023. Months ago, Jake Wood said the show would ‘definitely’ return next year. And while many thought Cutler would fit right in at the potential event, he quickly shut those rumors down in October.

The venture seemed exciting, but Cutler expressed he had no intention of returning to a competition stage. Instead, the bodybuilding legend is focused on a ‘fit for 50’ challenge and getting into the best shape possible. As he continues his efforts in the gym, Cutler shared why he favors dumbbells for bench press versus barbells.

During the Instagram video, Cutler explained why he prefers dumbbells on the bench press.

With a goal in mind to build the chest, Cutler said it’s best to use a classic 8-12 repetition base. He finds dumbbells to be safer than barbells on the bench.

“But we leave our egos at the door, and we want to focus on more movements to build the chest. And everything with the chest training should be focused on the 8-12 repetitions when you’re trying to build your physique as a bodybuilder. I stick more to dumbbell pressing. It’s an isolateral movement. You can definitely get more benefit from contractions. It’s a lot safer in the long run,” Jay Cutler shared.

Bench presses are excellent exercises for developing upper body strength and mass, regardless of your fitness goals.

The use of dumbbells isn’t the secret to growing muscle or achieving elite levels of strength, but it can certainly help. It is always a good idea to visit the dumbbell rack whenever you need to make changes to your chest training program.

Cutler stopped competing but his passion for fitness and working out fuel his life today. Now that he’s retired, he looks at training similar to meditation. He gets a sense of relief following each workout and that motivates him to maintain a level of consistency.

In addition to his diet, the four-time Mr. Olympia shared that he will strictly use testosterone replacement therapy to facilitate the ongoing physique transformation. The 49-year-old specified that he won’t be using the controversial compound Trenbolone to improve his physique. At the end of last month, Cutler also revealed that he’s currently on 200 milligrams of testosterone a week.

Cutler’s longevity has inspired others to compare his health to eight-time Mr. Olympia Ronnie Coleman. Even though Coleman is nine years older than Cutler, former Mr. Olympia Samir Bannout says it hurts him to see Ronnie not as healthy as Cutler.

During Coleman’s lengthy tenure, he won the Mr. Olympia title eight times. He suffered a number of back surgeries and complications following his career, leading to his inability to walk without assistance. In spite of those setbacks, the bodybuilding icon motivates others and pushes through the numbness when he works out.

Given Cutler’s upcoming ‘fit for 50’ goal, this looks to be just the start. He plans to add a meaningful amount of muscle to his build in the coming months. When the legend is training bench presses, he favors dumbbells for their safety and results.