Liver King once again denied that he uses steroids, and would love the chance to sit down with Joe Rogan to clear the air: "what we need to do is unite" 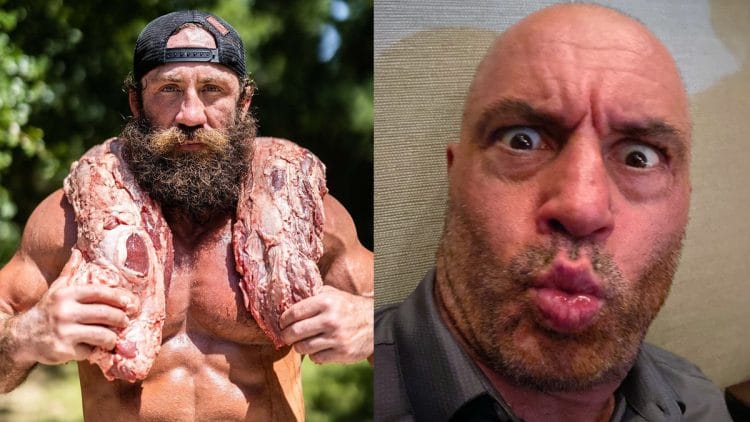 Liver King and Joe Rogan (Images via @liverking and @joerogan/Instagram)

Brian Johnson, well known as Liver King has been the talk of the town lately, mainly due to his obscure raw organ meat diet and shredded physique. After Joe Rogan implied that his ‘ass was filled with steroids’, Liver King denied the allegations and expressed interest in having a one-on-one discussion with the popular podcast host.

From pulling weighted sleds in Times Square, New York, to traveling the world in hopes of learning from various indigenous groups, Liver King has emerged as a unique influencer in the fitness sector over the past few years. He lives by the nine ancestral tenets and has garnered a ton of social media attention courtesy of his organ-based diet.

Many have questioned whether or not Liver King has a natural body given his ripped physique. Podcast host and UFC analyst Joe Rogan was one of the latest to argue that Liver King doesn’t have a ‘natural body’.

The organ-meat eating primal responded by saying that he’s never ‘touched the stuff’. Even though he has been painted in an unfavorable light at times, Liver King appreciates all criticism because it helps spread the ancestor lifestyle he’s been promoting for quite some time.

Liver King Says YouTube Influencers Made Him Famous: ‘Any PR is Good PR’

After being referenced in a post by fitness personality Derek who runs the More Plates More Dates YouTube channel, Liver King celebrated with his wife after realizing the online attention resulted in a huge wave of followers on social media.

“It was one of the greatest days of my life! I read to my wife at 6:30 in the morning, and I’m like ‘Liver Queen check this shit out! I’m on More Plates More Dates. I even called the kids over and they were sleeping, and it was just barely getting light outside. It was one of the greatest days because the biggest issues everyone has when they’re trying to spread the message is obscurity.” Liver King shared.

Liver King is adamant that Derek ‘single-handedly’ introduced him to millions of followers by questioning his ‘natty or not’ status.

“He single-handedly launched me out of obscurity irrespective of was the message favorable or not. Well, guess what, people say ‘any PR is good PR’. There is no doubt in this case that he single-handedly introduced millions of his followers to a guy that nobody had ever heard of. So, if this guy is completely full of shit, no one is going to follow him. But you know how many followers we captured from that one post? And then this happened again a couple of days later.”

While Liver King acknowledged many of the posts about him aren’t favorable, he’s grateful because it enabled him to go mainstream with his message of living like our ancestors.

“We’re just having the times of our lives, beyond grateful for everything that’s happening and realizing this thing is actually going to go mainstream because people are paying attention.” Liver King explained.

“Something is happening and in a polarizing enough fashion to where other influencers with megaphones want to talk about this. So, I couldn’t be more grateful. I don’t care how you want to paint this.”

Liver King Confident His Message Can Save Lives: “I Want Everybody to Win”

Liver King believes people should approach life by focusing on what our early ancestors prioritized decades ago, like hunting and spending time outside. Despite the steroid allegations, he added that people ‘need to unite’ now more than ever.

The social media influencer maintains that health as a whole is deteriorating in many developed countries. The issue is so pervasive that he says people with chronic conditions are being abandoned by their doctors and/or medical professionals.

“My thing is to say, is what we model is far more important than what we preach and teach. You don’t have to look too far to see how evolution has this elegant design to kick ass in life.” Liver King added. “There’s so many people that have these intractable, chronic conditions, and they don’t know what the fu*k to do.

What I’m wanting to advance is based on looking at historical record, based on what other bad ass species are doing. Try this. Just try it. What I know is that many people have their life changed.” Liver King explained.

Even though many have questioned his ‘natty or not’ status, Liver King would love the opportunity to discuss the matter with Joe Rogan at length.

“Look at how many people that have never heard of me have now heard of me. It’s one of the greatest feelings. I also just do want to say, that him saying that is dangerous. I want to set the record straight.

I would love the opportunity to talk to him face to face and really get deep into the nine ancestral tenets. I’ll face it head-on. I don’t touch the stuff. I’ve never done the stuff. I’m not going to do the stuff.”

Once again, Liver King reaffirmed that he’s never touched steroids and was shocked by how ‘deep’ this discussion has progressed.

“Never taken steroids. I’ve never done PEDs. Other than, prioritize, execute, and dominate in life. The other day someone said something about growth hormone, someone said something about insulin. Somebody keeps going off on the deep end and saying ‘what about designer drugs that nobody can fuc**n detect?’ And there’s all these peptides too. Oh my goodness. I didn’t know how deep this could possibly go.”

Liver King added that he looks the way he does because he’s been training since ten years old. Additionally, the social media sensation revealed that he’s working out twice a day, which usually comes to about 12-14 training sessions per week.

“What I want to say is this: he said that I had an ass full of this. What I want to say this, is what I have is 35 years of hard fuc**n work. Since I was ten years old, I’ve been training. I’m proud of that. Liver King clarified.

“For the latter years I’ve been working out twice a day. I usually get 12-14 workouts in a week. This doesn’t even count the micro workouts that I do.”

In addition to Rogan, former UFC heavyweight Brandon Shaub also took to his podcast to discuss Liver King’s physique. One of the biggest takeaways from the discussion came when Shaub said people are ‘triggered’ because they can’t live the type of life that Brian Johnson is leading.

Powerlifter Mark Bell actually visited Liver King’s house and echoed to his followers that no steroids were found in the superstar’s home. He was left impressed by how the 45-year-old conducts his life and mentioned that Liver King is rapidly approaching a nine-figure income.

While the fitness community continues to question whether he uses steroids, Liver King is happy that his message is reaching a broader fanbase. After denying the use of gear again, Liver King would love nothing more than to discuss the matter with Joe Rogan live on his podcast.