Dan Solomon: Derek Lunsford is ‘No Where Near 212 At This Point’, Hints at Special Invite to 2022 Mr. Olympia in Men’s Open

Mr. Olympia President Dan Solomon gave an update on Derek Lunsford's 'unique situation': "we have to evaluate an invitation for him to compete in the big division" 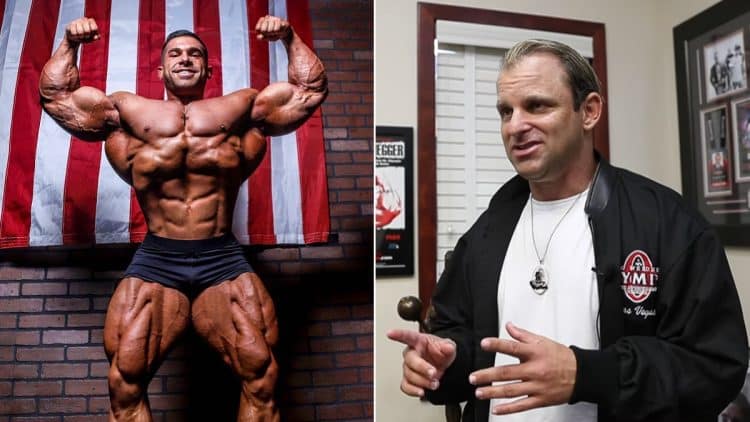 President Dan Solomon released a statement on reigning 212 champion Derek Lunsford’s potential switch into Men’s Open bodybuilding. In a recent YouTube video, Solomon explained that Lunsford’s situation is ‘unique’ and hinted that he might get a special invitation to compete in Men’s Open at Olympia later this year.

Lunsford is a mainstay in bodybuilding’s 212 division. The IFBB Pro has managed to place in the top five at the prestigious show over the past five years. Lunsford’s career reached new heights last year following his first victory at 2021 Mr. Olympia in the 212 division. En route to earning his lone Sandow trophy, Lunsford defeated Shaun Clarida in second, who won the 212 Olympia title back at the 2020 event.

In May, Lunsford guest posed alongside Nick Walker, Brandon Curry and Hunter Labrada at the 2022 Pittsburgh Pro. He filled in after Big Ramy was absent from the event for undisclosed reasons. Fans were shocked by Lunsford, a 212 competitor, who stood next to some of the freakiest mass-monsters in the Men’s Open division without looking undersized.

Coached by Hani Rambod, Lunsford continues to pack on quality muscle mass during his off-season this year. Rambod, who trained seven-time Mr. Olympia Phil Heath and top Olympia finisher Hadi Choopan, is doubtful that Lunsford can make 212 in a healthy manner. According to Solomon, he is also unsure if Lunsford can safely make the weight.

Dan Solomon on Lunsford in Open Bodybuilding: “He’s Going to Give People Trouble in That Top Five or Six Group”

In a YouTube video, Olympia President Solomon broke down the Lunsford situation and echoed many of the concerns his coach Rambod had about Derek’s size right now.

“So Derek Lunsford’s situation is more unique than any other. First of all, he is the reigning 212 champion. He hasn’t even had a chance to go in and defend his 212 title yet, that’s the first thing. But then we have a health issue. Not saying Derek has a health issue, Derek is very healthy, so let me be clear about that. Here’s why it’s a health issue. Derek is no where near 212 at this point. We’ve seen it.

Derek is much bigger than 212. Then, we ask ourselves, what does he have to put his body through to get under 212-pounds. That’s a legitimate question right? We’re all wondering that.” Dan Solomon explained.

Solomon says a situation like this has never happened before, where the reigning 212 champion might be unable to compete because he can’t make the weight in a safe manner.

“I’ve spoken to his trainer Hany [Rambod]. We all communicated on the viability and the safety of him getting under that weight. So, yeah, the Derek Lunsford matter is one that we’ve never really been faced with.

That our reigning champion might not even be able to compete in the 212 because his body has grown at such a feverish pace.”

If Olympia brass refuses to give him a special invitation, Solomon believes it’s possible Lunsford will not be able to compete altogether in Las Vegas later this year. In spite of these hurdles, Solomon is confident Lunsford would do quite well should he ultimately make the transition.

“Not only would he probably contend for an Olympia title, or at least be in the mix. I don’t know if he’s winning the Olympia at this point but he’s certainly going to give some people trouble in that top five or six group. Someone told me the other day, that they thought Lunsford had the best back in the world, in any division. I guess that’s up for debate. The point being: Derek’s situation is unique because if it comes to a point where we have to evaluate an invitation for him to compete in the big division, that’s a tough one because it’s possible if he doesn’t get that opportunity, he might not be able to be in the show.”

While Solomon and company aren’t ‘thinking too much about it’ right now, the Olympia President acknowledged that the Lunsford situation needs to be cleared up imminently.

“There might not be a place for him in the show. The question for us becomes, do we want to put on an Olympia without Derek Lunsford in the contest? That’s a conversation for you know, Jim Manion, Tyler, Jake [Wood] that we will have to have when that time comes. Right now, we’re not thinking too much about it, but you asked the question, and it’s definitely a good one because Derek has found himself in a situation that we’ve never delt with before.”

With how popular Derek Lunsford has become within the bodybuilding community, many fans, including Dan Solomon, are excited to see how he fares against top names in the Men’s Open division. He continues to train non-stop in the off-season and recently showed off a leg day session with 2021 Arnold Classic champion Nick Walker.

In addition to Solomon, four-time Mr. Olympia Jay Cutler also expressed optimism about Lunsford jumping into Men’s Open. Cutler labeled Lunsford as ‘extremely dangerous’ and wouldn’t be surprised if the reigning 212 champion managed to crack the top-three in the Men’s Open category at Olympia this year.

It remains unclear if/when Derek Lunsford would receive his special invite to compete at 2022 Olympia in Men’s Open but clearly, it’s being discussed. If Lunsford gets the invitation, Solomon believes the reigning 212 champion will give many of the show’s top performers a run for their money.

Triceps Extension vs. Skull Crusher – Which One Is Best?