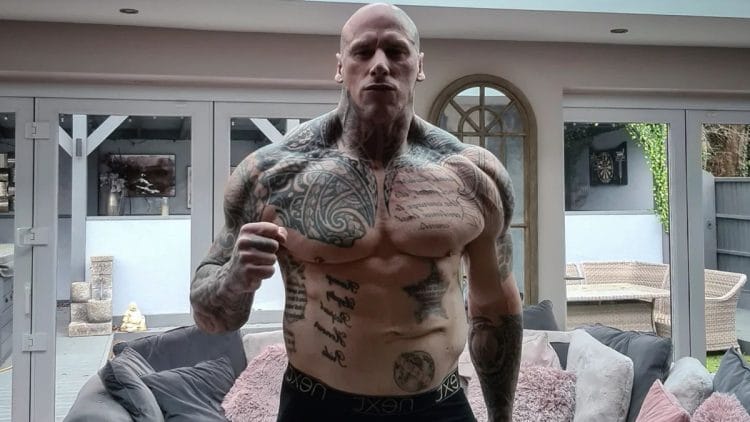 Martyn Ford is currently one of the biggest and most muscular people on earth. However, he is set to battle against an even heavier man in a boxing match. On April 2nd, 2022, Martyn Ford will face the ‘Iranian Hulk’, real name Sajad Gharibi, at the O2 Arena in London. It won’t be official until the actual weigh-in before the bout, but the match will go down as one of the heaviest in the history of boxing. Gharibi’s bodyweight is unknown, but Martyn Ford posted an update stating that he weighed in at 315 lbs (143 kg).

Despite carrying a lot of weight, Ford’s stature makes it look amazing, as he is 6 feet 8 inches tall. His physique is very impressive, particularly his capped shoulders and huge quads. Ford’s body fat percent is quite low, considering he weighs 315 lbs (143 kg). In addition, Ford’s tattoos complete his look, and he justifies the ‘World’s Scariest Man’ nickname.

“Weighed in this morning at 143 kg. Feel Amazing in the lead up to this fight, still powerful, explosive and working hard on speed. Time to step it up even more now, no letting up, I will be the best version of ME … no matter what, I WILL be ready.”

Related: Martyn Ford Says His Dream Fight Would Be Against Dwayne ‘The Rock’ Johnson

It will be interesting to see at what bodyweight the Iranian Hulk will come to the match, but at the start of his preparation, he reportedly weighed in at 400 lbs. Martyn Ford has lost 15 pounds of bodyweight since he started preparing.

Only 3.5 weeks are left until the match, and things have already heated up. The World’s Scariest Man and the Iranian Hulk have already had their first stare-down, and it couldn’t have passed without some physical contact. This just shows that the tension between them is real, and we are in for a great match.

To squash, the beef, Ford, and Gharibi will fight for the win and bragging rights. The fight is scheduled for 4 round, and each round will last 2 minutes. It will be the main card of the event, which will also feature 12 more fights.

Sajad Gharibi is 7 inches shorter than Ford, but will also be a lot heavier. However, Sajad is also 10 years younger than the 39-year-old Martyn Ford.

In 2019, both guys signed contracts to an MMA fight in the Polish MMA promotion called KSW. This was just one of the rumors about their fight. However, this fight was canceled with no explanation why, but their boxing match will definitely happen on April 2nd, and only one man can be victorious.

Martyn Ford looks like a heavy favorite for the upcoming boxing match. He is in peak physical shape, extremely agile, powerful, and is training with some of the best fighters in the world. Ford also believes in himself, but we will see if the Iranian Hulk can shock the world.