Martyn Ford also explained that Sajad Gharibi "WAS NOT what was sold" to him and the investors. 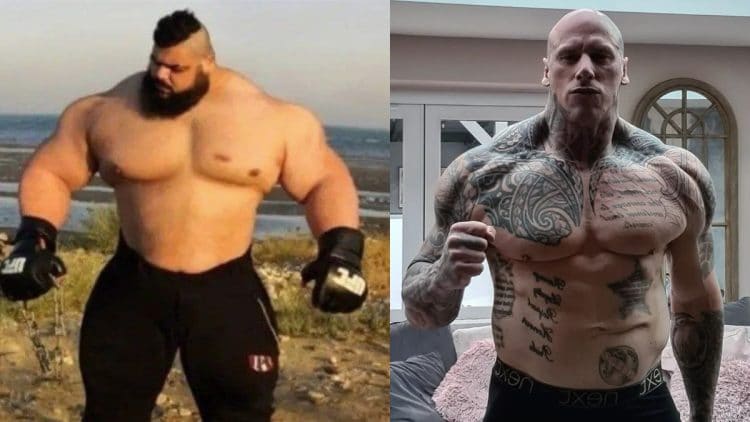 The long-awaited fight between Martyn Ford and Sajad Gharibi has been canceled a few days ago, but the altercations between ‘The World’s Scariest Man’ and ‘The Iranian Hulk’ did not stop yet. Ford shared the news about the fight call-off on his Instagram, but he did not reveal the exact reasoning for those actions. Gharibi revealed that it was not his decision to pull out from the boxing match. Gharibi also expressed that he intends to sue for a contract breach.

A lot of people were wondering why the fight was canceled. One such person was very direct and left a comment on Martyn Ford’s Facebook post asking who is at fault. Ford gave a response and attached some pictures to his replies.

“They say a picture speaks a thousand words. Let’s just say, what turned up WAS NOT what was sold to us by the investors. This followed up by crying on the TV and saying that he wants to end his life. Was enough for us.”

Martyn Ford answered one more commenter, but this time his reply was more direct and concrete.

“Concerns on mental well-being and also health and safety risk involved with this matchup.”

You can see the full interactions here:

It seems like Martyn Ford is insinuating that the Iranian Hulk is not the same size as he was presented in the pictures, which is not what the fans expected. Sajad Gharibi recently also had an emotional reaction in one interview, and some people involved in the fight seem to have some fear about his post-fight mental health.

What Is Next For Martyn Ford?

This is not the first time that the fight between Martyn Ford and Sajad Gharibi has been canceled, as they were supposed to fight multiple times by now. However, this definitely seems like the end of their journey together. This means that Ford will not get his boxing debut soon, but he aims to have one in the future.

“There will be a debut, there will be a fight. I’m just not 100% sure of who, when or why. But it will happen, and nothing will change there.”

Martyn Ford has already indirectly challenged some people for his future fights even before all the recent complications. Firstly, he explained that his dream fight would be against Dwayne ‘The Rock’ Johnson. However, Ford definitely seemed to have some issues with Hafthor Björnsson, after the 2018 World’s Strongest Man won the ‘Heaviest Boxing Match In History’.

Martyn is a good friend to Eddie Hall, and after his loss, Ford thinks that he is the right person to avenge him. This could potentially be a great matchup, as both guys are roughly the same size and stature.

It seems like the saga between Martyn Ford and Sajad Gharibi is finally coming to an end, and that we finally got the actual reasons for the fight canceling. We will still have to wait and see how the rest of the situation plays out, and if Martyn Ford finds himself an opponent for his boxing debut.

Jessica Buettner Smokes 468.5lbs Squat Then Follows it Up With 4 Reps of 405lbs Paused Squat