"The Mutant" joined coach Hany Rambod to discuss if Blessing Awodibu can beat him at 2022 Mr. Olympia: "It's not going to happen this year" 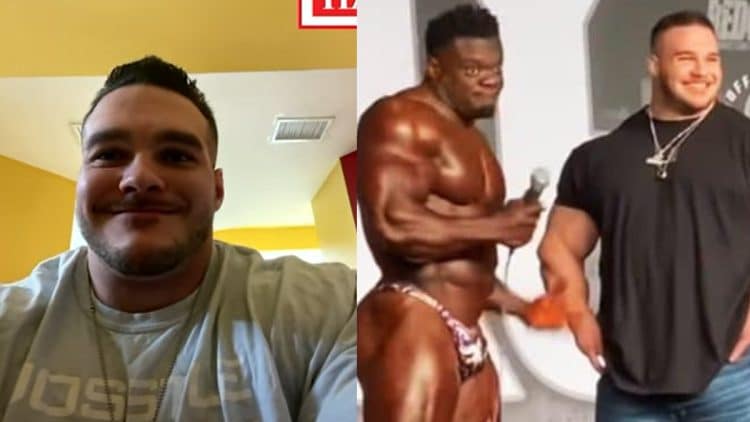 One of bodybuilding’s biggest stars, Nick Walker is currently in the heat of off-season preparations for his second appearance at 2022 Mr. Olympia this December. In a recent interview with coach Hany Rambod, Walker implied that Blessing Awodibu is not on his level, even after their rivalry was reignited at the 2022 New York Pro.

Last year saw Nick Walker turn in one of the most impressive rookie seasons ever recorded in the sport. He kicked the year off by claiming gold at the 2021 New York Pro. Prior to the contest, Blessing Awodibu was keen on starting a rivalry with Walker. Despite tension arising between the two, “The Boogieman” was unable to capitalize on his trash talk and took sixth place at the east coast event Walker won.

The New Jersey native proceeded to the 2021 Arnold Classic, and once again laid claim to another major bodybuilding title. Following two consecutive victories, Walker took part in 2021 Mr. Olympia, a contest which saw him earn fifth place in his debut, respectively.

After an unsatisfactory year in the sport, redemption was on the mind of Blessing Awodibu. He began the season returning to the 2022 Indy Pro, the show he made his Men’s Open debut in last year. After winning first place, Awodibu’s lust for gold didn’t stop there. He brought his physique to the 2022 New York Pro and won the contest convincingly.

According to Walker, the rivalry was never manufactured or planned. Following Awodibu’s first-place performance at the 2022 New York Pro, banter ensued on stage. Awodibu made it clear that he planned to ‘whoop’ Walker’s ass when the two meet for Olympia later this year. With two victories and an Olympia invitation in his back pocket, Awodibu and Walker are at it again as both men continue preparations for the biggest show of the year this December.

Nick Walker Rejects Awodibu’s Chances of Defeating Him at 2022 Olympia: “I Love Blessing But There’s No Way”

Speaking on Hany Rambod’s The Truth podcast, Walker gave his thoughts on Awodibu and where he sees him going in the sport this year. After touching on Awodibu’s new coach George Farah, Rambod asks Walker about their former rivalry, which seemingly got reactivated at the New York Pro a few weeks ago.

“I was trying to be polite, say good job and congrats and he’s like, ‘where’s the microphone, I need the microphone.’ Yeah basically from that, that’s when he started it. We had a nice little banter. I love Blessing but there’s no way. It’s not going to happen this year [Walker laughs]. No. He’s not even in my vision.” Nick Walker states.

Rambod asks Walker why he thinks Awodibu isn’t on his level. In response, the 27-year-old provided his reasoning, adding that he does believe Awodibu will do ‘extremely well at his first Olympia.’

“He has a very good physique, very good symmetry, wide back, little waist but I don’t think his legs are going to be where they need to be by the Olympia. I don’t think his hamstrings are going to be where they need to be, his glutes won’t be where it needs to be. He has the upper body right; he just doesn’t have the lower half. I don’t think their going to grow by a dramatic amount of size by Olympia. I do think Blessing will do extremely well at his first Olympia, 100 percent. I do think he will be in the top-ten for sure but he’s not in my vision here.” Walker explains.

While Walker admits there was animosity with the 2022 New York Pro winner at first, he can appreciate the rivalry and the enthusiasm it created amongst fans.

“It is fun. I certainly enjoy doing it. Honestly, I think it’s good for the sport to have that. I mean, obviously, there’s limitations here, you don’t want to go too far. Other people that will try to do it, it won’t be the same. Me and Blessing have a good connection to where we are able to do things like that.”

After Rambod asked if the rivalry ever got personal, Walker explained that there was hostility between the two bodybuilders prior to the 2021 New York Pro.

“In the beginning. Because I didn’t know him, right. I didn’t know who this guy was and he started to call me out. Even how it started before New York right? I don’t know how many weeks out we were, all I know is that I was taking a nap on my couch. I look up and my DMs are flooded.

I’m like what I napped for 20 minutes what’s going on. So, I’m looking at my phone and there’s this guy, and I’m like, ‘who the fuc* is Blessing?’ I have no idea who this kid is. I’m listening, he’s calling me out and shit. At first, I’m laughing, ‘oh this is cool.’ Then, he just kept going. I was like, ‘who the fuc* is this guy man?’ We haven’t spoke and I didn’t know who he is, nothing. Walker continued. There was no like, ‘yo, that’s start some hype.’ Nothing.”

Speculation continues to swirl around reigning 212 Olympia champion Derek Lunsford following a guest posing appearance at the 2022 Pittsburgh Pro. After Mamdouh ‘Big Ramy’ Elssbiay was absent to guest pose at the event, Lunsford was tapped to replace him.

Lunsford joined a group of top finishers from last year’s Olympia in Men’s Open, like Brandon Curry, Hunter Labrada, and Walker. Given Lunsford’s impressive size while standing next to mass monsters like Walker and Labrada, many fans began to call for a move into Men’s Open bodybuilding.

When asked if he thought Lunsford had a shot in Men’s Open, Walker clarified that he has top-five potential and could easily see him standing against some of the sport’s freakiest physiques.

“In my personal opinion, perhaps if he did go into the Open this year, I could see him being in the top-five for sure, without a doubt.”

“I think him… I don’t know his weight obviously at the moment. But him at a good 225-230 — that’s dangerous. That’s really fuc**n dangerous for everyone.” Walker added.

Should Lunsford commit to changing categories, he too will join Walker and Awodibu on the Men’s Open stage in Las Vegas. Since Awodibu and Walker have both earned invitations to 2022 Mr. Olympia, they will battle on stage later this year, looking to earn their first coveted Sandow trophy. While Walker is adamant Awodibu isn’t on his level, “The Boogieman” will get a chance to respond on stage later this year.

Preparations for the upcoming 2022 Olympia are in full swing. From powerhouse Mamdouh ‘Big Ramy’ Elssbiay to rising prospect Andrew...