After his scheduled bout with the 'Iranian Hulk' fell apart, 'The World's Scariest Man' is working out and hitting weights despite not having a fight lined up. 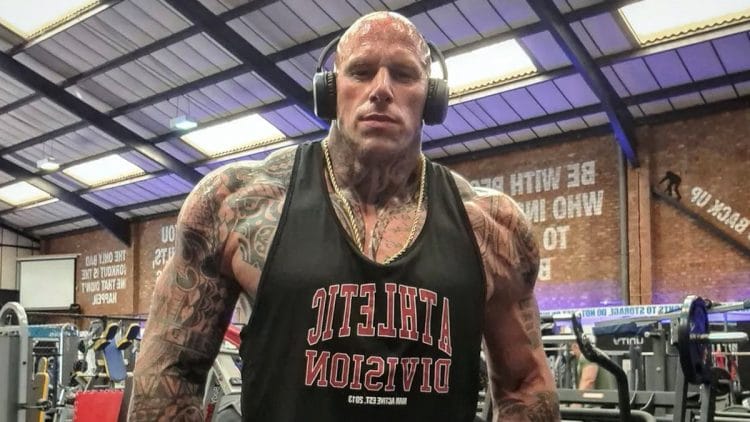 With no opponent currently lined up, Martyn Ford isn’t resting on his laurels and is committed to improving his combat skills. Ford revealed that he gained 6-pounds in just one hour of weight training as he eyes a potential debut in mixed martial arts.

Martyn Ford was scheduled to make his boxing debut in April against the Iranian Hulk (real name Sajad Gharibi). After the bout was postponed, their fight was rescheduled. A number of issues arose before the two could touch gloves inside the ring. When Iranian Hulk and Ford met in Dubai face-to-face for the first time, violence ensued as Gharibi attempted to push the towering 40-year-old to the ground. After Gharibi was unsuccessful, they faced off once again, but Ford drew first blood this time, pushing Iranian Hulk to the ground with little effort.

Weeks before their scheduled collision, the Iranian Hulk made headlines after he was seen crying in a TV interview. The social media phenomenon mentioned that his family disowned him after the ’embarrassing’ face-off with Ford. In a surprising turn of events, the fight was called off but both combatants offered different stories for the cancelled showdown.

Ford believes he and his team were sold a false bill of goods and mentioned that the image Iranian Hulk portrayed leading up to the fight did not match reality. Iranian Hulk, on the other hand, believes Ford pulled out of the contest, which prompted Gharibi to announce that he’s suing his former opponent for a breach of contract. While his fight with Gharibi looks to be off the table, that hasn’t stopped the British native from slaying weights in the gym.

Ford is ‘one hundred percent’ getting involved in MMA, according to a recent statement. He is eying the Polish MMA promotion KSW, an organization Ford signed a contract for even though he never ended up fighting under the banner. With no clear date for a fight, he is staying busy in training and already added six-pounds to his gargantuan physique.

“Well, with no clear date in mind to fight, thought I’d do a cheeky bodybuilding session guess muscle memory is a real thing … thing I’ve added about 6lb in an hour.” Ford posted

“One hundred per cent I am planning on getting involved in MMA,” Ford told Mirror Fighting. “I am already speaking to KSW. This is something that was set pre-covid. I have still been doing pieces of Jiu-Jitsu and stuff. They are looking at coming to London in October, and that is an event I would love to get involved with.”

The Polish promotion is eying a London show in October and Ford expressed interest in competing on the card. He has no opponent in mind but is keeping his options open, as he and his team try to lock down a new opponent.

“It just needs to be the right person and right time, my feelers have been put out there to try and get this set up as soon as possible. I understand the frustration from people about not yet seeing me fight. I am still training, only thing I am not doing is active sparring. I have switched back into its resistance and explosive power.

Following his cancelled boxing match with Iranian Hulk, one opponent Ford is considering is five-time World’s Strongest Man Mariusz Pudzianowski, who has found plenty of success as an MMA fighter in his own right. Meanwhile, Hafthor Björnsson is fresh off a major boxing victory against fellow strongman star Eddie Hall. Ford is open to fighting either man but was confident that Pudzianowski would make for an ‘easy fight’ compared to dealing with someone lengthy like Thor.

“Thor has a massive reach advantage over Mariusz and he is MMA so I see that as kind of an easy fight to be honest,” Ford continued. “He is a tremendous guy; Thor has been boxing for a while now and he has the size advantage.”

RELATED: Martyn Ford Worried Iranian Hulk Would Kill Himself If They Fought, ‘No I can’t Be a Part of This’

Ford’s nixed fight with Iranian Hulk is no longer on the forefront of his mind, but that hasn’t slowed him down in the slightest. After gaining six-pounds in one hour of weight training, Ford is continuing to push the pace in the gym despite not having an opponent lined up to fight.