One of the sport's brightest prospects Andrew Jacked is dialing in his prep ahead of the 2022 Texas Pro, scheduled for August 12-13th. 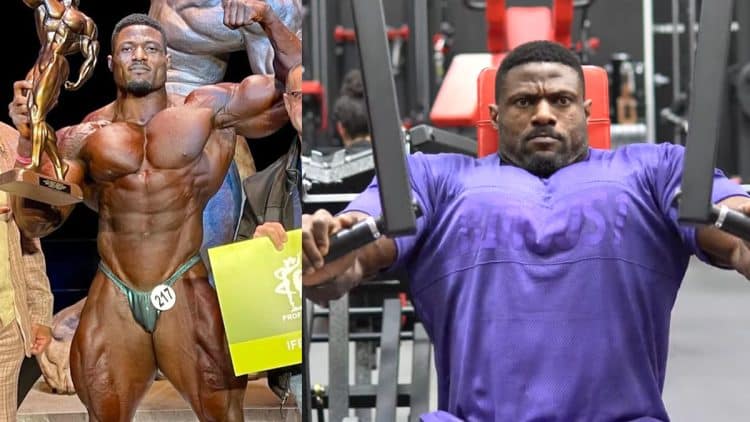 Andrew Jacked is one of bodybuilding’s most exciting prospects this year. In a recent video, Jacked demonstrated a high-volume chest and triceps workout while discussing his plans for the upcoming season.

Jacked quickly emerged as a rookie bodybuilder to watch after winning the EBBF Ajman Bodybuilding and Physique Competition in his debut as an amateur. He possesses a spectacular build with a slim waist, lots of muscle mass, and detailed conditioning. Before making his way to a bigger event, Andrew picked up another victory at an Elite Pro League show before taking some time off to build his physique.

Earlier this year, Jacked trained alongside seven-time 212 Olympia champion Flex Lewis. During the workout, Lewis and coach Milos Sarcev were taken aback by Jacked’s size and bodybuilding potential. The Men’s Open standout also trains with bodybuilding legend Flex Wheeler, who has served as Andrew’s prep coach since he made his way into the sport.

Despite the high expectations on Jacked, he didn’t falter under the pressure and won the overall Arnold Classic Amateur title when he stormed the event back in March. He dwarfed other competitors with shocking muscularity and left judges speechless after showcasing insane flexibility during his posing routine. In preparation for his first pro show, Jacked shared a high-volume chest and triceps workout while discussing his plans for the rest of 2022.

You can find a full list of the exercises featured in the video below:

During the workout video, Jacked informed his fans he will compete at the stacked Arnold Sports UK show, but also intends to enter the Texas Pro in a couple of weeks, which will serve as his pro debut.

“Well… everyone knows it’s official, I’m doing the Arnold Sports UK. I was placed as a wild card so it’s happening on September 25th. I’ll be ready for that one. I was lucky. It’s a blessing. So, I don’t know but any time something like this happens it means something good is coming.

Bodybuilding legend Flex Wheeler is Jacked’s prep coach. They have worked in tandem in the past to help Jacked with his training and posing techniques. The blue-chip prospect revealed that Wheeler brought in George Farah to help with the nutritional side of the sport earlier this year.

“Flex [Wheeler] is my prep coach I’m working with. I told him ‘hey man whoever you bring onboard, I’ll work with. I’ll work with the person because I trust you.’ So, he brought on George [Farah] to the team and yeah, we spoke and started to work out together with my nutritionist. He’s very good and they make it a perfect combo.”

According to Andrew Jacked, he was only operating at about ‘60%’ during his performance at the Arnold Classic Amateur show back in March.

“The Arnold, everyone knows about the Arnold. I wasn’t at my best at the Arnold. I only prepped for about four and half weeks. I was like 60%, yeah I wasn’t taking my best to the Arnold. We’re trying to take things slow because it was my first amateur show.”

Since Jacked struggles with his appetite and the volume of food he takes in, George Farah is helping him better understand how his body works. Farah, revered for his coaching abilities, now breaks up Andrew’s meals into smaller courses so the bodybuilder can stomach food easier.

“I didn’t want to go all in, and George is also trying to understand how my body works and stuff because my stomach is so sensitive and so small. I can only eat four meals. He has to break down my meals in six places, and when you put it together, it would be like three whole meals and one snack meal. It has to be broken down. Slowly, we are working on that. I’m very allergic to so many things, so we’re working on that also. Yeah, it’s not an easy thing.”

Andrew pushes the pace even when he’s not preparing for a show. The Men’s Open competitor turned heads with a 220-kilogram (485-pound) deadlift for reps a few months ago. Jacked said he stopped doing deadlifts back in 2020 so that he could perfect his form and fire off the exercise with 100% effectiveness.

With his eyes fixated on his first pro show, fans are counting down the days until Jacked is back on stage. Judging by his thorough chest and triceps workout, Andrew Jacked is determined to separate himself from the rest of the pack next month at the 2022 Texas Pro.