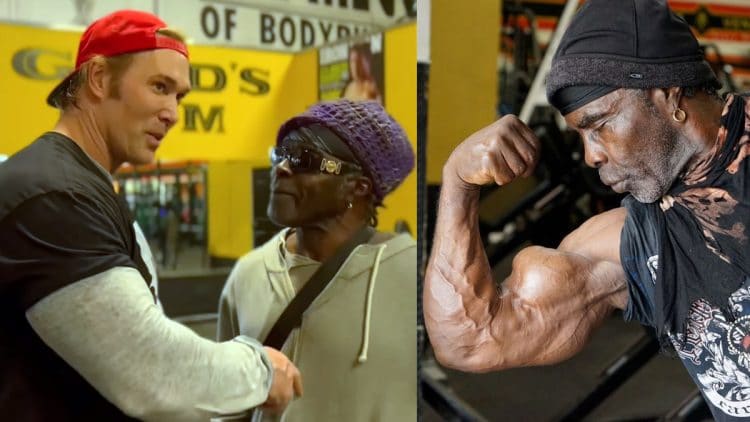 There are few athletes in the sport of bodybuilding who can boast about longevity like Mike O’Hearn and Robby Robinson can. In a recent video, O’Hearn was joined by Robinson to train and discuss some ‘old school’ methods for building biceps.

If anyone has found the fountain of youth, certainly O’Hearn is on the short-list. His combination of size and aesthetics have only bolstered his presence in the sport of bodybuilding. Known for modeling, bodybuilding, powerlifting, strongman, and acting, there are very few challenges that O’Hearn hasn’t taken up during the course of his life. At 53 years old, he is as ripped as ever and has become a sage voice for the bodybuilding community.

O’Hearn, a Mr. Universe champion, shares that distinction with fellow bodybuilding veteran Robby Robinson. In his first year as a professional, Robinson not only nabbed the Mr. Universe title but also earned gold at 1975 Mr. America. His accolades are astounding, as Robinson also became the inaugural champion of the first annual Night of the Champions contest held in 1979.

In what would become the biggest achievement of his career, Robinson won the first Masters Olympia contest, which was held in 1994. In addition, Robinson also won Masters Olympia in the  50+ division in 1997 and 2000.

Robby Robinson and Mike O’Hearn on Building Biceps: ‘It’s About the Art of It”

In an effort to inform his massive fanbase, O’Hearn and Robinson joined forces to discuss how to build biceps and offered some enlightening pointers.

And if there’s a change in the form, what did we do different weight wise, rep wise, time wise? All of those kinds of things come into play.” Mike O’Hearn explained.

O’Hearn made a side note, where he explained that once his hand starts slipping to the side of the handle during a dumbbell routine, that’s a signal for him to rest. Robinson pushed O’Hearn and encouraged him to focus on squeezing with maximum strength on each contraction.

“Take notes on today. Robbie’s going to go isolation. He’s going to do little key movements of the hands. It’s going to change the feel of the isolation, where I’m going to stay powered.

So, I’m going to blow through this thing just as you saw there. I’m going to go heavy as freak. Robbie is going to do isolation. Training together, same workout, but different concentration.”

Robinson advocates for modified grips to get the most out of each bicep curl. By rotating the wrist, he added that the outside head of the bicep is targeted.

“This is something that people wouldn’t normally do.” Robinson added. “It’s just like if you’re coming out of a curl, if I kept my hands clamped like this, and I come out of it, it forces the outside head of the bicep and the brachii to come into play.

So when I turn my wrist at the top, these three fingers is actually what rotates the wrist and builds the biceps. If you just curl it up, you’ll have just a bicep, but you’ll have a more awesome bicep if you turn your wrist.” Robinson shared.

O’Hearn played devil’s advocate and asked Robinson what he would say to those who think the form is irrelevant just so long as the weight is being lifted with a contraction.

“[Some people] they’re saying these extra movements that you do or I do, or the hand coming up like this, it doesn’t really change the exercises” O’Hearn asks Robinson.

“Yes it does. Are you out of your mind? You’re missing the whole point. That’s the whole thing of it, it’s about the art part of it. That’s where the hard part comes in. That’s why Mike looks the way he looks, that’s why I still look the way I look. Even at 76 years old I look like this but I put in the work. I do all those little things.

People don’t want to do all that, people are lazy. I don’t care who it is. You don’t interrupt those little things, you’re missing the whole biceps, triceps.” Robinson continued.

While the lower body often goes unnoticed during curls, O’Hearn and Robinson maintain that foot positioning is paramount to achieving adequate gains.

Before wrapping up the session, O’Hearn stressed that movements like these are what is going to ‘pay dividends in 20 years’.

“I was telling Billy, look at his feet. Then Robbie walks by and he tells him to fix his feet. I know we’re doing curls. I get that, I get that maybe going once a week. I’m talking this stuff is going to pay dividends in 20 years. It’s just a stronger position.” O’Hearn shared.

O’Hearn and Robinson are still pushing the pace decades after being active bodybuilders. In April, O’Hearn linked up with NFL analyst Heath Evans, where he showed off a mind-boggling 385-pound close grip bench press for ten reps.

The 10 Best Exercises to Beat the Flat-Butt Blues