With nothing left to prove as a bodybuilder, Lee Priest gave his thoughts on a potential comeback: "I never rule it out but at the moment, no." 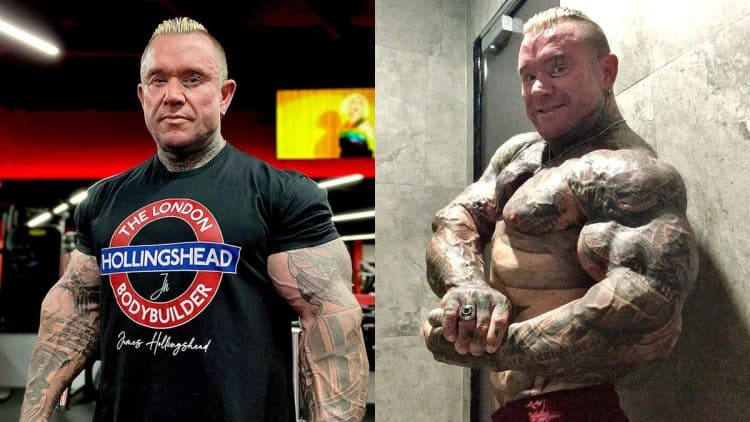 Bodybuilding veteran Lee Priest defeated world-class talent during his respective tenure and underwent a physique transformation as of late. In a recent video, Priest addressed Masters Olympia rumors that have been swirling ever since he decided to get back into shape.

Priest led an exciting career as an IFBB Pro from the 1980s-2000s, where he competed against some of the sport’s most respected legends, like Flex Wheeler, Chris Cormier, and Shawn Ray. Despite having one of the most conditioned physiques during his prime, Priest was unable to win a prestigious Mr. Olympia title despite qualifying for the event several times. In spite of that, he left the sport on top, something that modern bodybuilders have struggled to do in today’s climate.

With some of the best and most detailed biceps in the game, Priest stormed the 2006 Iron Man Pro stage and won the show handily. He proceeded by winning gold at the Night of Champions (NOC) New York in the same calendar year. Before stepping away from the sport, the Australian native won the title at the 2013 NABBA Mr. Universe contest. The bodybuilder sailed off into the sunset and has been enjoying retirement ever since.

Priest has made headlines for his recent physique transformation, which prompted many in the community to discuss the idea of him returning to a competition. Priest has shared the progress he’s made during this recent transformation and revealed the cycle he’s been using to facilitate the process.

It looked as though the stars were aligning for Priest’s inevitable return to the sport. Back in February, Olympia President Jake Wood made it clear that Masters Olympia would be returning ‘definitely by 2023‘.

Masters Olympia was created by Joe Weider in 1994 to accommodate older bodybuilders who still wanted to compete in the sport. The show ran from 1994 to 2003, and again in 2012. The latest event in 2012 was won by former Mr. Olympia Dexter Jackson. While it’s uncertain where the venue would be or the qualifications needed to participate, Priest isn’t ruling the show out as a possibility in the future.

In a recent interview, Lee Priest gave his thoughts on whether or not he’s considering a Masters Olympia comeback.

“No. Not really. Lee Priest explained. Yeah, but I still have the chest. I never rule it out but at the moment, no. Well, if they made it 50 and over sure, but that’s not at the tune they are talking about.

For some people, because some of the pros now are older, some of them are at the age where they can do the Masters and then still compete in the Mr. Olympia. So, there has to be… they are talking about maybe 50 and over, and maybe you haven’t competed in maybe the past four or five years.” Lee Priest shared.

One of Priest’s main concerns is the criteria used to determine who is eligible to compete at Masters Olympia, assuming the show returns. Given that some of today’s competitors are pushing mid to late forties at Mr. Olympia, Priest believes a 50+ age limit would make sense.

“I don’t know, just being over 45 maybe. Which a lot of guys here in the Olympia and other pro shows are over 45. So, yeah. At least 50 and over and haven’t competed for maybe a certain number of years. Say you did the Mr. Olympia last year and placed fifth or second, but you’re old enough to do the Masters. Then, what’s the point?”

According to Priest, should he mount a comeback, he insists that the hardest body part for him to bring up would be his chest. He added that his pec has atrophied and that ‘people’ have suggested he get an implant to balance out his appearance.

“Slowly getting there. It takes time. So, by the time this is all done I might be 60. Maybe the Masters can be 60 and over.” Priest joked. “Yeah by mine [pec] is more atrophied away. Remember Scott Steiner, he had nerve damage and the same type of thing.

They talked about maybe putting an implant under here [points to chest] but they have to rip off your chest muscles and put it under. Or take fat from wherever I got fat and inject it there. So, it will look symmetrically the same, but when I pose, it wouldn’t contract and have striations. You know, symmetrically, it would look the same.” Priest shared.

If Priest got an implant as suggested, he’s worried that he wouldn’t be able to hit poses properly since a muscle with an implant wouldn’t contract or have striations. In addition to his chest, Lee Priest said that his triceps would need a lot of work as well if he had serious ambitions about returning to a show.

It remains unclear what Priest’s plans are but his impact on the sport of bodybuilding is sure to continue. He was recently inducted into the Muscle Beach Hall of Fame. After accepting the honor, Priest dedicated his achievement to his friend, the late Eddie Guiliani, who passed away at 87 in May.

Priest would undoubtedly be an ideal addition to any Masters Olympia contest at this point, and he just turned 50. As of this writing, Priest isn’t planning a return but wouldn’t rule Masters Olympia as a possibility in the future.