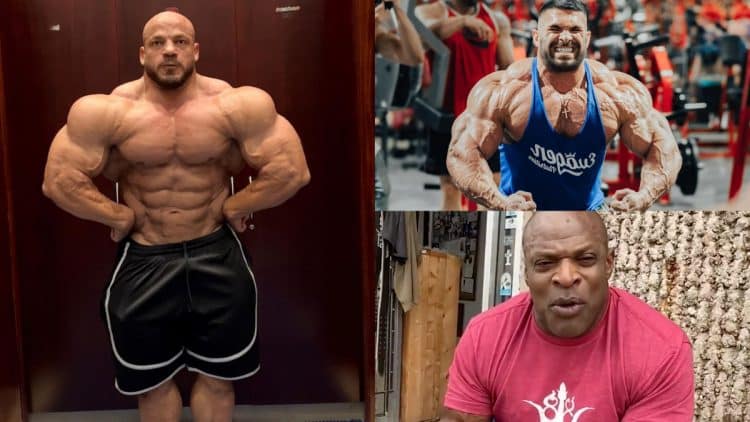 Legend Ronnie Coleman is widely regarded as one of the greatest bodybuilders of all time. The eight-time Mr. Olympia winner knows what it takes to succeed at the highest level and still has a passion for the sport. In a recent appearance on Muscular Development’s Ronline Report, Coleman shared his breakdown of the Men’s Open division for the 2022 Olympia.

From powerhouse Mamdouh ‘Big Ramy’ Elssbiay to rising sensation Andrew Jacked, this year’s season is turning out to be one of the most exciting and competitive of any in the last few years. Two-time defending champion Big Ramy enters the contest as a favorite to win his third Sandow trophy. However, he will need to combat rising talent in William Bonac, Hadi Choopan, and newcomer Michal Krizo.

Meanwhile, Derek Lunsford, the reigning 212 Olympia winner, announced his switch to the Men’s Open division for the nearing Olympia after his request for a special invite got approved. Lunsford’s entry injected even more excitement into the Open category.

Iranian bodybuilder Hadi Choopan has received support as another top contender for the event. He placed third at the 2021 Olympia, behind runner-up Brandon Curry and champion Big Ramy. ‘The Persian Wolf’ recently partnered with three-time Classic Physique winner Chris Bumstead for an intense back workout using the FST-7 (Fascia Stretch Training) method developed by their coach Hany Rambod.

Michal Krizo has emerged as another promising contender in the Open division. The 32-year-old Slovakian mass monster boasts an impressive package with unreal muscle mass and symmetry. After switching to the NPC in July, Krizo went on a rampage in his hunt for Olympia glory. He earned his IFBB Pro card at the 2022 Amateur Olympia Italy and dominated the competition at the 2022 EVLS Prague Pro to secure his Olympia qualification.

In a recent video uploaded on Muscular Development’s YouTube channel, Ronnie Coleman shared his breakdown of the Men’s Open division. He believes Lunsford has the potential to push Big Ramy on the 2022 Olympia stage.

“Derek is the only one that’s pretty close to him right now that’s got everything. He’s really complete, he’s got a lot of thickness and everything.”

Coleman praised Hadi Choopan for his insane condition but argued he was not as complete as Lunsford.

“I think height makes a difference, as well as conditioning and thickness, and I think Derek is close to being complete. Hadi Choopan is real good in some areas and not so good in some other areas. He’s not complete like Derek is right now but anything can change.”

Given the intense level of competition in the Open division this year, it’s difficult to predict who will walk away victorious. Coleman gave his top five prediction and believes four competitors will be battling for second place.

“Man it’s so hard right now, I know so many good guys, but I see Big Ramy first, then second it could be [William] Bonac, he is looking real good. Then Brandon Curry always look pretty good, and then these new guys coming in here Derek and I don’t think Andrew can place that high, and I don’t see Nick [Walker] placing that high either, in the top three. For the second, it’s going to be between Bonac, Hadi, Derek, and Brandon. Four guys can place second I think.”

“The second is going to be real tough. It could be Bonac because he’s looking good. I hadn’t seen these guys, but judge coaching Bonac said they were good. Brandon is probably gonna be third or fourth. And then new guy, (Michal Krizo) might be up there too in the top five. It’ll leave Hunter and Nick are probably behind them.“

According to Ronnie, Samson Dauda could be the dark horse of the division. He added that he has future Mr. Olympia potential written all over him.

“Maybe Samson Dauda. I was saying he could possibly win one day so I was to include him in our earlier conversation as being one of the guys that’s going to automatically shock everybody.”

Big Ramy is confident he will extend his reign of dominance with a three-peat at the 2022 Olympia. He recently stated that Lunsford has a shot at finishing in the top six at his first Open appearance at Olympia. Ramy also admitted that the arrival of Krizo and Jacked added a ton of excitement to the show.

With the 2022 Olympia set to go down this weekend, fans will soon find out if any of the Men’s Open competitors have enough firepower to stand against Big Ramy.

RELATED: Phil Heath Explains How to Defeat Chris Bumstead at 2022 Olympia: You Need a ‘Full Back,’ Conditioning, and ‘Flow’