The popular Liverpudlian says Trenbolone keeps him strong throughout the year: 'it doesn't really do much to me. I just use it for strength and that's it' 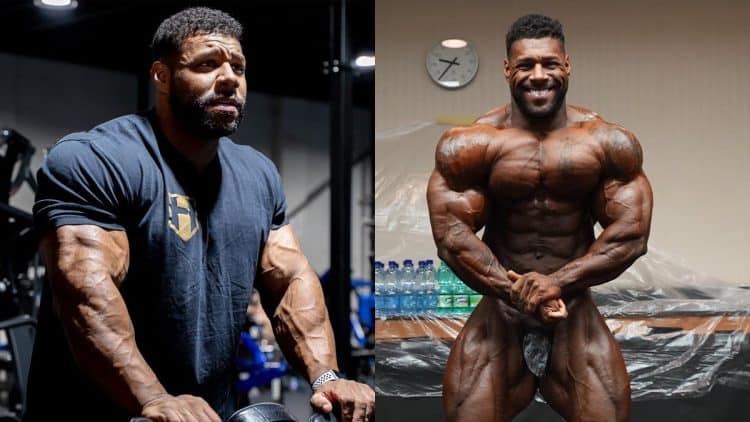 Men’s Open bodybuilder Nathan De Asha credits Trenbolone as his preferred compound for staying strong year-round. In a recent video from Desktop Bodybuilding, De Asha explains why Trenbolone is his favorite drug despite some athletes citing a number of undesirable side effects.

Nathan De Asha is an elite-level Open class competitor in the IFBB Pro League. During his successful tenure, De Asha has graced the Olympia stage on three occasions. Last year, he proved himself outside of the biggest show in the sport by winning three consecutive contests, starting with the 2021 Europa Pro Championships, and ending the year with first-place finishes at the Arnold Classic UK and Yamamoto Cup.

With preparations for 2022 Mr. Olympia underway, athletes are methodically planning the rest of their season, which includes bodybuilding cycles. In addition to diet and training, a cycle drastically impacts a bodybuilder’s physique. However, for most in the sport, determining how much and which compounds to take can be a challenging task.

For De Asha, Trenbolone has become a staple in his bodybuilding cycle. And he’s not the only notable athlete who has discussed the drug at length. Powerlifter Larry Wheels described life on Trenbolone as a ‘living hell.’ Out of all the steroids Larry has taken throughout his life, he named Trenbolone as the worst. Though, if you ask De Asha, he’d relay a completely different message about the controversial compound.

Nathan De Asha on Using Trenbolone ‘Year-Round’: ‘I Use It for Strength’

In a recent video, De Asha explained why he never comes off Trenbolone and why he loves the compound so much.

I love going in there being strong. Sometimes I go in there and do fu**ng Instagram fu**ng fame posts, just go on there squat whatever, bench whatever, for a few likes and shit. I just like being strong man, I like Tren,” Nathan De Asha shared.

Back when he was younger, De Asha used Winstrol every day. He added that if his bodybuilding protocol excluded Trenbolone, he would just take it behind his coach’s back.

When asked if he’s ever come off Trenbolone, Nathan said absolutely not. While many have mentioned that Trenbolone causes mood disturbances, Nathan revealed he’s a ‘nicely balanced person’ and that it doesn’t affect him in that way.

“No. If my coach says, ‘Nathan, go on this, this and this.’ Okay, cool, I’ll take it, and if Tren isn’t in there, I’ll take it anyway. I don’t got to tell anybody. Nobody is here when I’m fuc**ng shoot up. Besides when the boys were jabbing me and stuff, I don’t know, I just like it.

A few of my friends just like it. Go in the gym, strong. I don’t think it gives me aggression because I’m a nicely balanced person anyway. So, it doesn’t really do much to me. I just use it for strength and that’s it. If Halotestin was around on a regular basis that was I believe was good and real. I’d probably live on Halo and Tren. I probably wouldn’t have anything else. That’s two compounds that I personally like, ” says Nathan De Asha.

According to Nathan, he ran into injury problems while using Deca (nandrolone decanoate).

Nathan believes he’s just as strong on 200 milligrams of Trenbolone versus 400. When he’s training at the gym, De Asha noticed differences in strength when he used Trenbolone for more than four days.

“I just stay away from Deca a little bit. The benefits of it for me not is really the best,” Nathan explained. “My compound is just Tren. Me and the guys like it, it’s our little thing. Whenever you want to hide those or whatever, just 200 migs. It’s probably a mental thing as well. Even when I’m on 200 mig or 400 — I’m probably just as strong anyway.

When I’m off it, I’m like, ‘ahh I’m not on this shit.’ Then, I get on it, and I’m back to being stronger. Obviously, you know yourself, it takes more than a week or four days to get into the system. After fuc**ng like three days, I’m like, ‘yeah, yeah it’s in, it’s in.’ And then, my mind just fuc**ng goes back to benching a six-plate bench or a five-plate bench.”

Despite the possible side effects, the Open class bodybuilder appreciates what Trenbolone does for his overall strength.

Earlier this year, three-time Classic Physique champion Chris Bumstead revealed that he’s using a ‘decreased’ cycle to help with his next title defense. Specifically, ‘C-Bum’ suggested that he’s only using two compounds as opposed to the four or five compounds he took when starting in the sport. He added that he ‘looks better’ since adopting the new cycle.

Nathan De Asha uses Trenbolone on a regular basis. While some have shared negative experiences with Trenbolone, Nathan De Asha credits the drug for helping him maintain his strength year after year.

RELATED: What is Gear in Bodybuilding?