From fourteen competitors down to eleven, the field of competition at the 2022 Arnold Classic is dwindling. 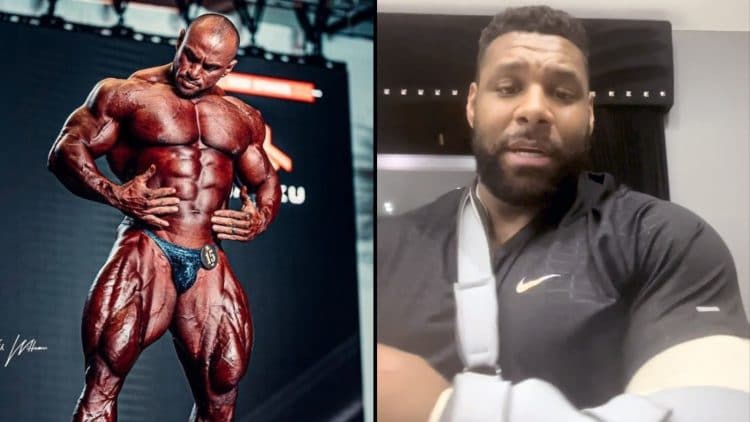 A pair of high-caliber bodybuilders have withdrawn from the 2022 Arnold Classic set to kick off in just under one month. Nathan De Asha and Mohamed Shaaban will be unable to compete at the upcoming Arnold and provided clarity about their respective decisions on Monday.

The 2022 Arnold Classic is set to take place from March 3-6. As the second biggest bodybuilding show of the year, time is ticking away as athletes are expected to take the stage soon. With preparation in full swing, bodybuilders are steadily issuing physique updates to give fans a glimpse of what is to come this year.

Before the unfortunate news regarding Nathan De Asha and Mohamed Shaaban surfaced, Rafael Brandão also withdrew from the Arnold Classic at the end of last month. While no reason was given for the withdrawal, the IFBB pro confirmed the news with staff at Fitness Volt in a subsequent statement.

Nathan De Asha has revealed he is pulling out from the 2022 Arnold Classic due to a torn bicep. The news is surely frustrating for De Asha considering the massive year he had in 2021. Nathan competed in a total of three major bodybuilding shows. Kicking off his season in style, De Asha competed at the Europa Pro Championships in August where he nailed first place.

The bodybuilder gathered momentum after his first-place finish at the Europa Pro 2021 and then took home gold when he dominated the stage at the Arnold Classic United Kingdom show. In his last appearance of the year, De Asha won the 2021 Yamamoto Cup, going 3-0 at major shows for the year.

Nathan De Asha shared a post on his Instagram page detailing why he’s been quiet on social media and his thought process behind the decision to withdraw.

“Public Announcement❗️
I maybe down but i definitely ain’t out.
Small things happen in life and it’s how we rise above it that makes us better. Many hurdles have been in my way throughout the years they just make me stronger.
This is why I’ve been a little silent. I thought small rehab could get me through it and onto the Arnold stage sadly that’s not the case. AM OUT! 😥 I won’t let it get me down still positive.
As my close friends and family know and still training 6 days a week, I live for this shit. I will run you guys through it over the coming days. Big exciting things to come though for sure.” Nathan De Asha shared.

While De Asha thought a small rehab might nip the problem in the bud, it turned out not to be the case as mentioned above. The IFBB pro is still training six days a week and is keeping positive despite suffering a setback. De Asha removed himself from the Arnold lineup due to a torn bicep. The bodybuilder provided further details in a follow up video below.

“About two-weeks ago I was doing a shoot in the gym. Trained biceps and felt a small pull, and thought, ‘ooh that feels a little bit funny’. A little bit strange. Went with my friends and my family to a center, and then it pulled again, and it just felt a little bit sore, a little bit hard. So, I phoned the doctor, and went to see the doctor on Monday or it was Wednesday. It wasn’t really bruised or nothing, he said to me I had a small tear in the bicep.” Nathan De Asha said.

Torn biceps can take up to ten weeks to heal even if they are minor. Of course, if surgery is required then a full recovery can take months.

Just a few hours after Nathan De Asha revealed his injury news, Mohamed Shaaban shared a comprehensive explanation on Instagram as to why he won’t be competing at the 2022 Arnold Classic. The bodybuilding pro shared the results of his MRI on the cervical spine. In a show of transparency, Shaaban provided MRI results, a doctor’s note, and a video of his orthopedic doctor explaining his ailment.

🚨UPDATE ON THE ARNOLD CLASSIC🚨

“There’s been a few post out there and people messaging me about the Arnold classic ohio.

It’s with deep sadness that I have to inform everyone that I will not be able to compete in the Arnold 2022.

I’ve attached my MRI results, along with my doctors notes/video explaining my results for those that do not understand.

This has been a pain that I’ve dealt with since before the Olympia of last year. I tried my best to push through, but after several doctor visits in Egypt and California, my doctors believes that it is best I sit this out and fully recover or else I won’t able to compete in the future.

Like with many athletes, we try to suck it up and do what we have to do, but it’s also our job to be responsible and take care of our health.

I’m hoping that this resolves and I’m 💯 healed. I hope that this doesn’t affect future invites and that I am able to get another invite next year to compete at the @arnoldsports , as this has always been my dream of mine to grace the Arnold stage.

When it comes down to it, i hope I can heal quick enough to prepare for other shows I need to compete in to qualify for the 2022 @mrolympiallc .

Thank you everyone who reached out to check on me, and I’m sorry I did not respond. But I was not ready yet to accept the terribly bad news. But this is just a road block that I know I will overcome.” Mohamed Shaaban shared. 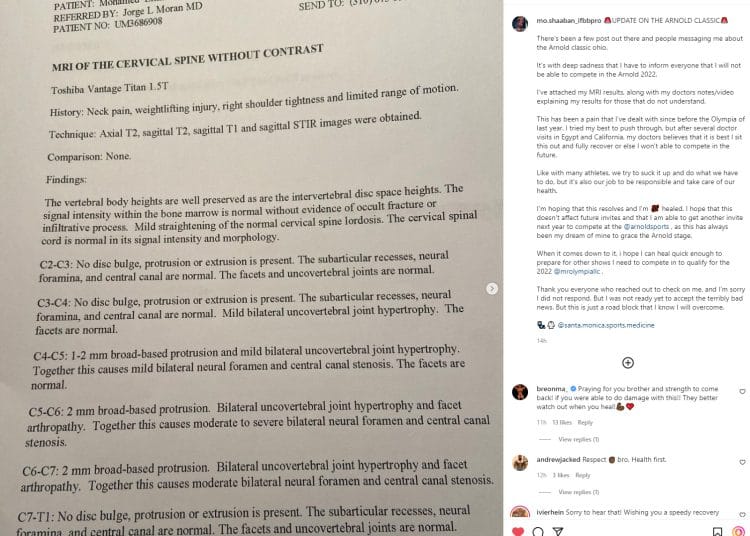 Shaaban is suffering from bulging discs. If untreated, the bulging discs can become herniated causing even more issues. The pro is optimistic that he will be able to return to some big bodybuilding shows if he follows his doctor’s recommendations.

According to Shaaban’s documentation, the bodybuilder has mild straightening of the normal cervical spine lordosis (excessive inward curvature of the spine) as well as disc disease in the cervical spine specifically from the C4-C5 to C6-C7 area.

Shaaban competed in four bodybuilding shows in 2021. The bodybuilder took runner-up in back-to-back events starting off the year. First, he won silver at the California Pro and then secured second place again at the Puerto Rico Pro. Following those two appearances, Shaaban placed fifth at the Tampa Pro. To cap off his busy year, Shaaban returned for Mr. Olympia and placed tenth overall in Men’s Open.

Granted, it’s always been Shaaban’s dream to compete at the Arnold Festival, the pro will need to carve out some down time in order to properly heal from this setback. Despite the unfortunate withdrawals of Nathan De Asha and Mohamed Shaaban, the show must go on at the 2022 Arnold Classic and the lineup remains fiercely competitive.