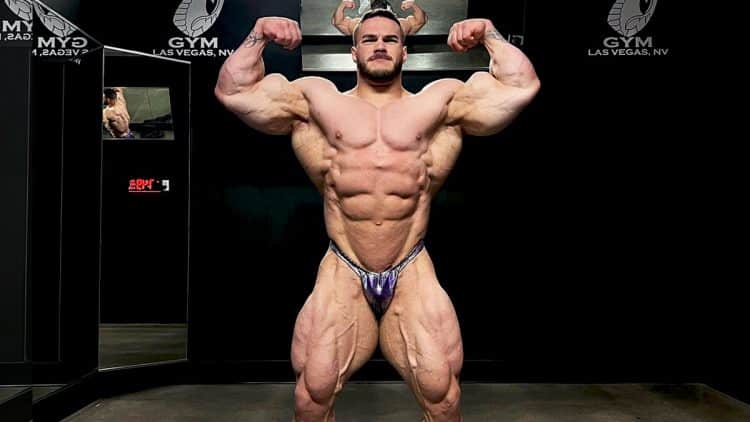 Bodybuilder Nick Walker is gearing up for the upcoming 2022 Mr. Olympia, scheduled for Dec. 15-18 at Planet Hollywood Resort & Casino in Las Vegas, Nevada. In a recent Instagram post, Walker shared a massive physique update and revealed his weight just three weeks out from the Super Bowl of bodybuilding.

Preparations for the nearing Olympia are in full force. From two-time reigning Mr. Olympia Mamdouh ‘Big Ramy’ Elssbiay to fellow standout Nick Walker, there is no shortage of talent this season. Walker first gained attention for his massive size and conditioning in the Open division, which is known to host some of the freakiest mass monsters in the world.

In 2021, Walker turned in one of the most impressive rookie seasons of any competitor. He kicked the season off with a win at the New York Pro. He followed it up with another first place finish at the Arnold Classic a few months later. Walker later established himself as a legitimate threat with a fifth-place finish at the 2021 Olympia.

In February, Walker shared that he would no longer be working with longtime coach Matt Jansen. Given the success they had achieved working together years prior, there were doubts about the package Walker would bring after the split. Walker later teamed up with coach Dominick Mutascio, better known as Dom Supersliced to keep his prep on track for the biggest show in bodybuilding.

While they seemed to be working fine, Walker put an abrupt end to his relationship with Dom to partner with coach Jansen again in September. Last week, Mutascio opened up about the difficulties he faced working with Walker and admitted things could have been handled better.

In a recent Instagram post, Nick Walker shared a huge physique update while going through a series of poses. He tipped the scales at a massive 262 pounds (118.8 kilograms).

‘The Mutant’ received major support from former Mr. Olympia Samir Bannout. Although Bannout was not always a fan of Walker, he confessed he had become a believer after seeing this year’s physique updates. Bannout recently clarified that Walker has made the right adjustments and is sporting a better physique than ever.

In another update, Nick Walker shared a grueling leg workout that he utilized while in prep for the 2022 Olympia. He showed off his sculpted hamstrings and stressed the importance of making every rep and set count.

“The Mutant” has been open about his bodybuilding goals. He said that his plan is to win as many Arnolds and Olympias as he can. Meanwhile, in a recent video with retired seven-time 212 Olympia winner Flex Lewis, Walker discussed his ambitions further. He told Lewis that he 1,000 percent believes he will become the 2022 Mr. Olympia champion. On top of that, Milos Sarcev has made it clear that the world want to see Nick Walker versus Big Ramy next month.

Going by the latest updates, Walker has high hopes for this year’s Olympia. He appears to be in a good place right now and looks forward to bringing his best next month.