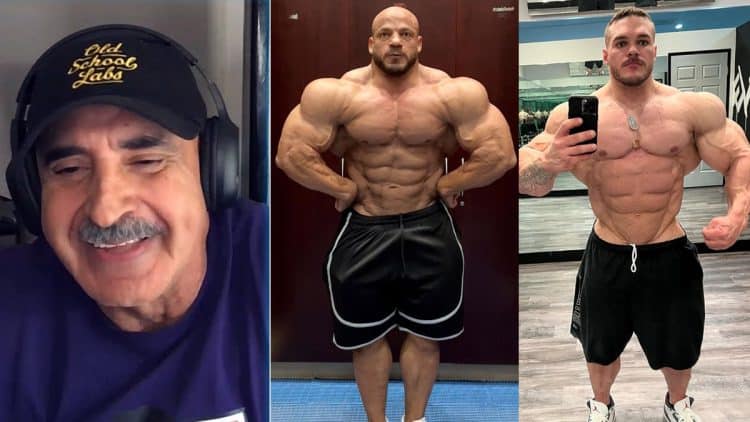 Former Mr. Olympia Samir Bannout moved on from competing a long time ago but still takes an active role in discussing the sport. In a recent Old School Labs video, Bannout shared his thoughts on Nick Walker’s prep before discussing his top five for 2022 Olympia.

Many believe this year’s Olympia contest will be one of the most competitive and exciting in years. Reigning two-time Mr. Olympia Mamdouh ‘Big Ramy’ Elssbiay will look to defend his throne against rising powerhouses Nick Walker, Hunter Labrada, Samson Dauda and a number of other elite competitors.

‘The Mutant’ turned in a fantastic rookie season in 2021. He was crowned the Arnold Classic champ and New York Pro winner last year. He also secured fifth place at 2021 Olympia. Walker faced Hunter Labrada, son of IFBB Hall of Famer Lee Labrada, who placed ahead of Nick in fourth. Nick was motivated by the defeat and declared he would win the next battle against Hunter when they go head-to-head on stage.

With over 1.1 million followers on Instagram, Walker is one of the most popular athletes in the Open division. About two weeks ago, he crushed an intense chest and bicep workout in preparation for Olympia. He tipped the scales at 279 pounds just six weeks out from the biggest show in bodybuilding.

In a recent video on the Old School Labs YouTube channel, Samir Bannout discussed the improvements Nick Walker has made in prep for the upcoming 2022 Olympia, scheduled for Dec. 15-18 at Planet Hollywood Resort & Casino in Las Vegas, Nevada.

Bannout backed Walker to improve his placing from last year and possibly place in the top three.

“I never even put one like for Nick Walker simply because I wasn’t impressed. I was impressed with his muscle density but now he’s getting tons of likes from me. Because his waist has shrunk down, whatever he is doing right now, he should continue to do. Yes, I’m very impressed and good job Nick Walker. Keep up the good work.”

“The way he has changed, all the mass he has, the double bicep, shoulder to waist ratio is so much better. I mean, night and day. I can see him doing better than last year. Again, we can never say that until we see them sep up on stage. I believe he’s going to be much more impressive this time. He doesn’t look bigger than before, he looks way better than before. This is the thing, I bet you he’s probably 20 pounds lighter.”

“Flex Lewis is an accomplished champion. For Nick to be in that environment is a plus. I think it will be a good decision, at least for the time being so he can be at his best ever.”

According to Bannout, Big Ramy will comfortably win a third Sandow trophy based on his crazy size. He also thinks budding prospects Andrew Jacked and hyped Michal Krizo could break into the top five in their Olympia debuts as well. Eight-time Mr. Olympia Ronnie Coleman shared a similar tune. He mentioned that Ramy will win his third title this year and likely hold on to the title for the next three or four years.

Last week, Nick Walker joined seven-time 212 champion Flex Lewis to break down his current prep, 2022 Olympia goals, and training with Matt Jansen again. He confessed to feeling mentally lost due to the intense pressure after 2021 Olympia. Now that he’s back with coach Jansen, he feels more confident and believes he will ‘1,000 percent’ be the 2022 Mr. Olympia.

Walker recently shared a shredded physique update just six weeks out from the show. He showed off a slim waist, his patented massive arms, and a full chest.

Along with Walker, bodybuilder Samson Dauda sent warning shots to his competition with an insane physique update while in prep for the contest. He showcased impressive size and vascularity ahead of his first Olympia appearance. His coach Milos Sarcev believes Dauda will emerge as the dark horse in the Men’s Open lineup.

Hunter Labrada is set to make his third Olympia appearance in December. He has been working hard in the off-season and contest prep to bring the best physique possible. He recently shared an impressive physique update just under six weeks out from the show, where he showed off his incredibly vascular and shredded arms/back.

Bannout called for Labrada to get shredded before the show.

Samir Bannout discussed the updates coming from bodybuilder Samson Dauda in prep for Olympia. Although Dauda has shown impressive muscle density and size, Bannout took issue with his stomach/midsection.

“You see the bubble look in the tummy, it’s sticking out. It’s bothering me a little bit.”

Labrada is laser-focused on improving his standing at the 2022 Olympia. This past weekend, he demolished a heavy leg day workout while in prep. He previously opened up about his goal of enhancing the growth of his legs and gave a look into the exercises he used to get ready for the event.

Nick Walker and Hunter Labrada will battle it out next month for a higher placing. While Walker backed himself to come out on top, many believe Big Ramy will retain his title once again.

With the goal of becoming a Mr. Olympia champion, bodybuilder Nick Walker plans to showcase dramatic improvements when he steps...

Men’s Open division standout Nick Walker is gearing up for the upcoming Olympia 2022, scheduled for Dec. 15-18 at Planet...