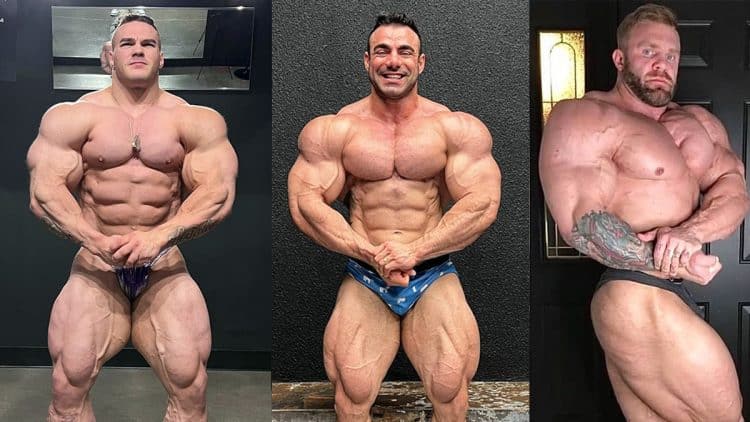 This year’s season of bodybuilding will end with a bang at 2022 Mr. Olympia with a number of contenders eager to take the Men’s Open title. In a series of posts, Nick Walker, Iain Valliere, and Rafael Brandao shared impressive physique updates almost six weeks from the biggest show of the year.

Veterans and greats of the sport have given their thoughts on who they believe will be crowned Mr. Olympia later this year. For the most part, many are in agreement that reigning two-time champion Mamdouh ‘Big Ramy’ Elssbiay will successfully defend his title. Eight-time Mr. Olympia Ronnie Coleman even congratulated Ramy on his future title defense after reviewing the competition.

But there are some rising contenders who believe they have what it takes to dethrone the champion despite him being a massive favorite. Nick Walker is among them. He led a historic rookie season in 2021 after winning the New York Pro and Arnold Classic. He wrapped up the season with a fifth place finish at Mr. Olympia and is now eying his second appearance later this year.

In addition to Walker, Canada’s Iain Valliere is also gunning for Ramy’s title. He earned his Olympia qualification after claiming victory at the 2022 Vancouver Pro. Valliere has helped three-time Classic Physique Olympia champ Chris Bumstead throughout his contest preps for the past few years. However, this season, Valliere is solely focused on bringing his best and won’t be coaching ‘C-bum.’

Another looming threat fans may have forgotten about is Brazil’s Rafael Brandao. Brandao has a unique physique for the Men’s Open division because it features qualities reminiscent of a Classic Physique-type structure, yet he still manages to maintain an impressive level of mass. Brandao’s last show was at the 2022 Arnold Classic South America in May, which he ultimately won.

Check out their physique updates below:

In the first update, Walker shows off his latest developments roughly six weeks from 2022 Mr. Olympia.

In addition to working out with Open class competitors Walker has been ramping up the intensity of his training sessions. He recently smashed a shoulders and arms training session where he showcased nine different exercises.

Walker has also been testing his strength by incorporating more deadlifts into his training regimen. He’s steadily given updates throughout the contest prep and has ambitious plans for later this year.

The next update for 2022 Olympia is from Iain Valliere.

While building his physique, Iain doesn’t mind discussing some of the talent he might run into at this year’s Olympia. He’s gone back and forth in an online beef with Blessing Awodibu, who is also Olympia-bound and currently amid preparations.

The Open standout also gave his thoughts on Andrew Jacked and his overall potential. Valliere sees Jacked as a threat and envisions him making the first call-out at 2022 Olympia. Despite that prediction, Valliere is determined to bring his absolute best to the stage and establish himself as a viable Olympia contender.

With less than two months until 2022 Olympia, Rafael Brandao issued an update showing off his current physique.

In the past, Brandao has trained with seven-time 212 Olympia champ Flex Lewis. They pushed each other during Brandao’s latest prep with a taxing back workout. Given his slim waist and conditioning, Rafael could surprise some of the division’s mainstays when takes to the stage in his Olympia debut this December.

There is no shortage of Men’s Open contenders expected to compete at 2022 Olympia. Walker, Valliere, and Brandao are committed to furthering their goal of dethroning the reigning champion Big Ramy.