"The Mutant" shows off his brand new BMW X6 in the training video. 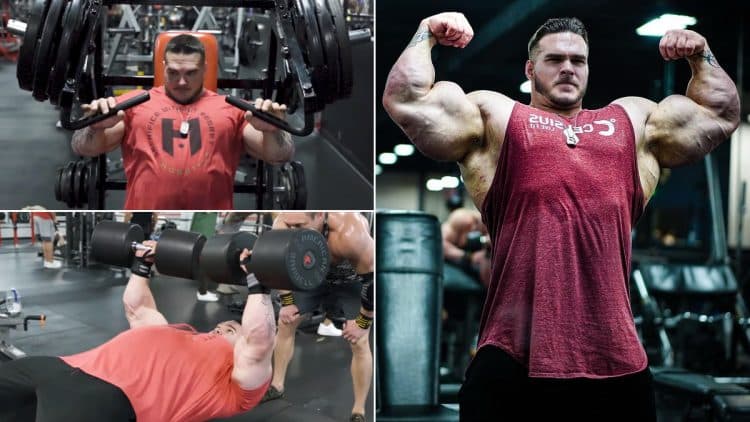 Men’s open bodybuilder Nick Walker is considered among the best talent of his generation. He is a rising contender and a highly touted prospect in the professional bodybuilding world. He took the world by surprise by winning the 2021 New York Pro and 2021 Arnold Classic within a year of earning his IFBB Pro card. The win at the 2021 NY Pro qualified him for the 2021 Olympia. A fifth-place finish in the Open division at the grandest stage of bodybuilding gave the 27-year-old a sense of where he stands among top competitors.

Following this, Walker decided to take an extended break from competing and focused his energies on improving his physique for the 2022 Olympia. The Mutant started his competition prep for the 2022 Olympia six weeks ago and has kept his fans updated with his progress. Recently, Walker went through a chest and biceps workout as a part of his Olympia prep. This session became the sixth episode of Walker’s Olympia Prep series shared on his YouTube channel.

The video started in a BMW Dealership where The Mutant gifted himself a 2023 BMW X6 for his birthday. Walker jumped into the workout right after. The 27-year-old has reiterated the benefits of slow reps multiple times and employed the same technique in this workout for every exercise.

Walker started the chest workout with the seated cable fly. This exercise works the fan-shaped pectoralis major that covers a large part of the chest. Since it was the first exercise of the day, Walker started out light and slow. He performed three sets with moderate weights to warm up his chest before moving on to the next exercise.

The 2021 NY Pro champ performed this exercise using the progressive overload principle. He completed the first set with two plates and the next with three plates on each side. The Mutant started the drop set with four plates and dropped to three plates before concluding the exercise.

Walker employed free weights for this exercise to target the middle chest. Since bulking or adding more muscle mass is not the goal of his training at this stage, the New Jerseyite performed both sets of this exercise with moderate weight and intensity.

This movement targets the upper pecs and improves chest development. Along with the pecs, the incline dumbbell fly engages the shoulders, creating the desired movement, while the triceps provide stability.

Walker performed three sets of this movement and jumped on to the next exercise.

Decline chest press served as the finisher for Walker’s chest workout. This movement works the clavicular (upper) and sternal (lower) heads of the pecs that do not get as much activation during the incline or flat version of the chest press.

The Mutant performed two working sets and one double drop set of this movement to put a full stop to his chest training routine. He then shifted his attention to the biceps.

Biceps curls work the bicep brachii. Additionally, curls also engage the brachialis, forearms, and shoulders. The cable variation of this movement keeps the muscles under tension throughout the range of motion, bringing more benefits in the long run.

Walker believes that his arms respond better to moderate weights and high reps. He performed two working sets and one double drop set of this movement.

This served as the second biceps exercise of the day. Preacher curls are one of the best exercises to build biceps as playing your arms on the pad prevents cheating. This movement primarily targets the biceps brachii but also works the forearm flexors, brachioradialis, and brachialis.

The Mutant performed two working sets before performing a drop set and moved on to the final exercise of the day.

Dumbbell hammer curls served as the last exercise of this training session. Once again, the 27-year-old performed two working sets and one double drop set.

The Mutant Chest and Biceps Workout

Walker made massive gains during the longest off-season of his career, from the 2021 Olympia to the start of his 2022 Olympia prep. Six weeks into the prep, The Mutant is focusing on improving his conditioning. The 27-year-old is confident that his new-gained size and definition will make a huge difference at the 2022 Olympia.

Nick Walker is one of the frontrunners for the 2022 Olympia crown, scheduled for Dec. 15-18 in Las Vegas, NV. He faces stiff competition from reigning champion Mamdouh ‘Big Ramy’ Elssbiay, Brandon Curry, and Hunter Labrada. The addition of the 2022 Texas Pro winner Chinedu Andrew Obiekia, aka Andrew Jacked, in the Open division has made things a lot more interesting. Will Walker deal an upset to Big Ramy to snag his maiden Mr. Olympia win? Only time will tell.