Nick Walker joined Kamal Elgargni for a brutal hamstring workout in preparation for 2022 Mr. Olympia: "nothing but high reps" 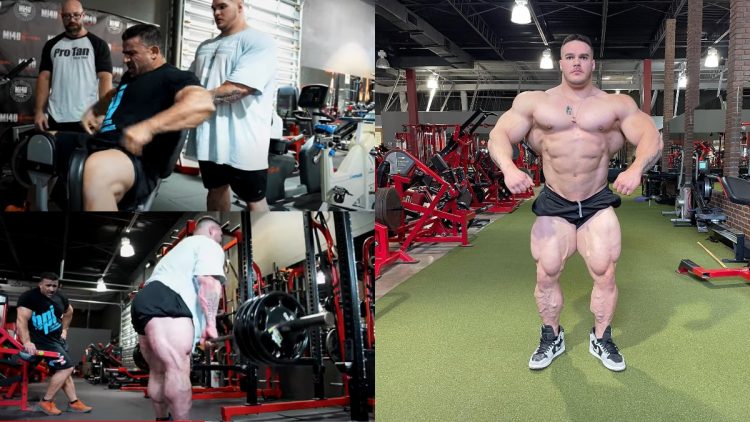 Bodybuilders Nick Walker and Kamal Elgargni are some of the hardest working athletes in the sport, and their accolades speak for themselves. In preparation for their upcoming seasons in bodybuilding, Men’s Open standout Nick Walker joined former 212 Olympia winner Kamal Elgargni for a day of hamstring training.

Walker, who is only 27 years of age, quickly rose to the top of the IFBB Pro League with insane muscularity and iron willpower. His dedication to dieting and training have only made him more dangerous on stage, despite many high-profile bodybuilders having an edge in experience over him.

“The Mutant” had a resounding 2021 season, having captured gold at the 2021 New York Pro and Arnold Classic. Before capping off one of the most commanding rookie seasons the sport has seen, the New Jersey native entered his first Mr. Olympia contest in 2021, earning fifth place in his debut, respectively.

Like Walker, Kamal Elgargni managed to win the Arnold Classic on his first attempt performing at the show. Specifically, Elgargni won the 2018 Arnold Classic and then brought his physique to the Mr. Olympia contest that same year. Ultimately, he fell short of the victory and placed third at 2018 Mr. Olympia. However, he was determined to improve upon that showing, and delivered one year later, when Elgargni left no doubt with the judges and won his first and only Mr. Olympia event in 2019.

While he intended to defend his title at 2020 Mr. Olympia a year later, Elgargni failed to retain gold after being defeated by “The Giant Killer” Shaun Clarida. Returning to 2021 Olympia, the Libya native took third place, again trailing behind Clarida, who walked away in second, and Olympia’s most recent 212 champion, Derek Lunsford. Despite being 51 years old, Elgargni is known for his relentless work ethic, which is a major asset for a young up and comer like Walker, who is determined to topple the reigning Men’s Open champion Mamdouh ‘Big Ramy’ Elssbiay in December later this year.

In a recent YouTube video, Walker and Elgargni join forces to run through a series of workouts designed to build bigger and more detailed hamstrings. Note* some sets and reps are approximated using the footage available

You can find a full list of the workouts used in their video below:

According to Walker, this workout was intended to be high-volume. After mentioning how four-time Mr. Olympia Jay Cutler used to call 12 his ‘magic number’, “The Mutant” explained that he and Elgargni’s magic number will be 20.

During Elgargni’s portion of this exercise, Walker stresses the importance of keeping the repetitions slow and performing them in a controlled manner.

“Glad I have stamina. It’s like having sex with a girl. No stamina? Disappointment. “That’s what we call the ten, ten, ten method. Gets you every time.” Walker stated.”

After performing one set of 12 reps on the seated hip abduction machine, Walker supersets with weighted sumo squats.

For their next exercise, Walker and Elgargni utilize weighted sumo squats for four sets of 12 reps.

Before moving on with standing calf raises, Walker and Elgargni hit four sets for 12 reps.

Despite being in the heat of off-season preparations, it’s evident that Elgargni and Walker are determined to bring an improved package to 2022 Mr. Olympia. They seemingly haven’t taken a day off from training, and utilized standing calf raises for their second to the last movement.

“Alright, so that wraps up the first hamstring day with Kamal and Adam. Nothing but high reps. 20 reps was the magic number today. Overall, good workout. I enjoyed it. Worked hard, pushed each other and just getting better each and every workout.” Walker said.

“He said everything. We killed it. Good job.” Elgargni added.

Judging by the severity of their hamstrings workout, Walker and Elgargni are making sure to squeeze the most out of each and every training session. After blasting their legs with a series of exercises, Walker and Elgargni plan to surprise the world’s best when they bring an improved package to 2022 Mr. Olympia.

Bodybuilder Seth Feroce Reacts to Public Backlash After Killing a Black Bear: “I Am Proud of This!”