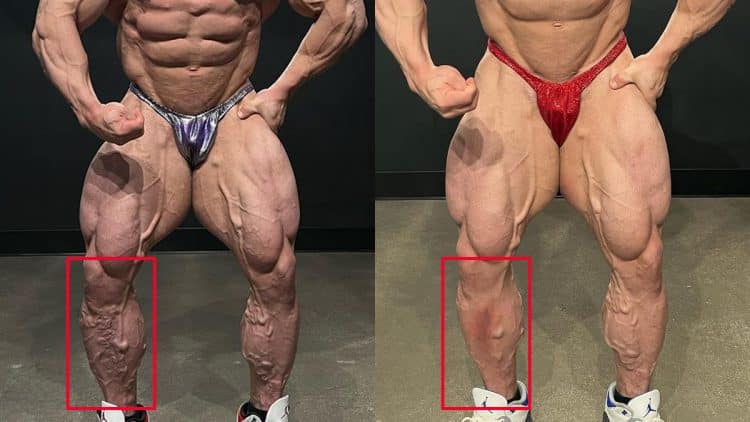 Nick Walker’s varicose veins were a point of concern ever since his rise on the pro bodybuilding scene back in 2021. The Men’s Open competitor has officially established himself as a legit top contender with a third place finish at the 2022 Olympia. He now seemed to have fixed the issue of varicose veins as well. Walker rose to prominence when he won the 2021 New York Pro and the 2021 Arnold Classic within a year of earning his IFBB Pro card. He has not looked back in his career since and scored fifth and third place finishes at the 2021 and the 2022 Olympia, respectively.

While his physique has only improved and gotten incrementally better over the last two-plus years, the thick veins on his calves have never ceased to concern the bodybuilding community. Legendary bodybuilder and 7-time Mr. Olympia Arnold Schwarzenegger repeatedly pointed out the anomaly when he was commentating at the 2021 Arnold Classic.

The condition is caused when weak valves in the veins cause reverse blood flow, resulting in bulging and twisted veins that appear prominent to the eye. In most cases, varicose veins are a cosmetic issue more than a medical one. However, it is best to take a professional opinion on matters like these. Although Walker’s unusually veiny shins have been a major talking point about his physique, they have not hindered his performance in the eyes of the judges. The competition results stand testimony to this.

Nick Walker seems to have addressed the varicose veins

Nick Walker will compete at the 2023 Arnold Classic that will take place from March 2-5 in Columbus, Ohio. He kicked off the competition prep with a chest and biceps workout. The Mutant shared a physique update 6 weeks out of the 2023 Arnold Classic to show a massively improved physique with various bodybuilding poses. Walker’s waist in the update seems a lot more impressive than ever and his physique is definitely worthy of another Arnold Classic win. However, the most impressive thing about the update is the reduced varicose veins. While still present, the veins on Walker’s legs are not nearly as prominent as they used to be. You can watch the physique update here, courtesy of Nick Walker’s Instagram account.

“No games to be played here,” Walker wrote in the caption to his post.

Walker’s physique update six weeks out of the 2022 Olympia puts the difference in perspective. While his physique looked fuller, the veins looked bulging and prominent.

To see the difference, take a look at both photos, placed side by side.

A closer look at Nick Walker’s shin in his recent photos shows a red patch. It could mean that he is undergoing treatment to get rid of the appearance. Whatever the case might be, it seems that the 2021 Arnold Classic winner will probably get rid of them soon.

Nick Walker is a favorite heading into the 2023 Arnold Classic. Derek Lunsford’s absence from the show means that Andrew Jacked will be Walker’s biggest challenge. 2-time and reigning 212 Olympia champion Shaun Clarida will compete in the Men’s Open division at the show. Clarida’s superb conditioning makes him a dark horse that can beat a lot of big guys. Walker also believes that Clarida will most likely finish second at the show. It will be interesting to see how the roster stacks up in the coming few weeks.