Kamali believes Andrew Jacked's freak factor and shape will overwhelm Nick Walker at the upcoming show: 'if this guy gets hams and glutes, it's lights out.' 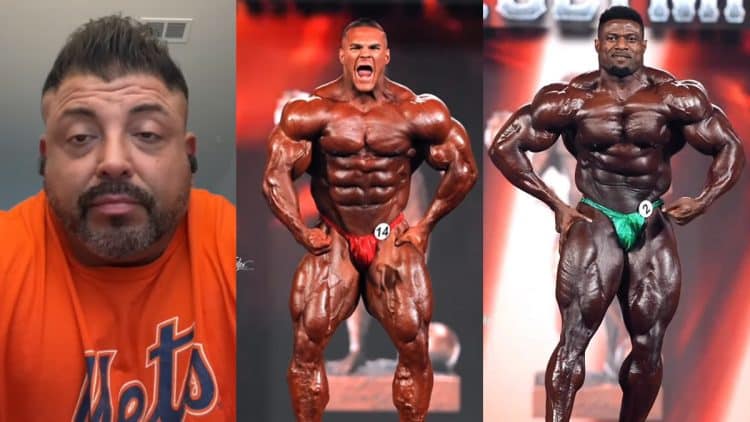 Retired bodybuilder King Kamali (Shahriar Kamali) still follows the sport closely despite stepping away from the stage. Kamali recently examined a potential showdown between Nick Walker and Chinedu ‘Andrew Jacked’ Obiekea ahead of the 2023 Arnold Classic, scheduled for March 2-5, in Columbus, Ohio.

This year’s 2023 Arnold Classic roster has undergone major changes over the past few weeks. Before the competitor’s list was revealed, Charles Griffen and Blessing Awodibu pulled out of the contest. Last week, the Arnold Sports Festival increased the prize money for the Men’s Open division winner. Instead of $200,000, the champion will earn a record $300,000.

The updated prize money sent shockwaves through the bodybuilding community. The added incentive was too much for Nick Walker to ignore. He announced his entry last week and hopes to earn his second Arnold Classic title after taking the honor in 2021.

Days after Walker made his decision, the 2023 AC lineup changed again. Andrew Jacked, who won his pro card at the 2022 Arnold Classic Amateur, entered the show as well. Jacked led a historic rookie season. The bodybuilder earned gold at the 2022 Texas Pro and Arnold Classic UK before attempting his first Olympia. And while he was forced to battle a 102-degree fever on stage, he still managed to finish 8th.

Speaking with Rx Muscle’s Dave Palumbo, King Kamali and Chris Aceto gave their thoughts on a showdown between Walker and Jacked. According to Kamali, Jacked is Nick’s kryptonite.

“But you take a real real real look [at Andrew Jacked], you might say, God, he might be way better than he actually looks here because he’s very in proportion. He’s got the narrow waist, narrow hips, big thighs, wide shoulders,” says Chris Aceto.

Kamali said ‘it’s going to be hard’ for Andrew Jacked to defeat Nick Walker at the upcoming Arnold. Despite the difficulty, he believes it’s possible considering Jacked’s shape and freak factor.

“Okay, that’s the key at this particular show. Any other, if we were talking about a year from now, my answer would have immediately been yes [that Andrew Jacked beats Nick Walker at 2023 Arnold Classic] but having only eight weeks, seven weeks to start training and dieting and all that stuff – it’s going to be hard,” says King Kamali.

“Here’s the curve ball, was Nick compared to Andrew Jacked at [2022] Olympia? [Not Really] See that’s the scary part if I’m Nick Walker and if I’m advising Nick Walker. You didn’t stand next to this mutant [Andrew Jacked]. What Nick Walker has is freak factor. We all agree on that, he’s freaky. What’s Nick Walker’s kryptonite… someone who is shapely and freaky. That’s exactly what Andrew Jacked is — a shapely, freaky dude.”

Once he fills in his hamstrings and glutes, Kamali predicted Andrew will be even more dangerous on stage.

“Andrew is so… again, he’s so freaky and that skin, that 3D, the pores and stuff that has when he hits his muscles and stuff. You and I have discussed it Dave, it’s not rocket science. We don’t need to go re-analyze the Olympia as we did before. If this guy gets hams and glutes, it’s lights out.”

“I think that Nick one on one was more dangerous to Hadi or more dangerous to Lunsford alone — as opposed to like a group of four. Because you just compliment the freakiness, you don’t measure it up versus — like he can overwhelm people in some ways, like a Derek or a Hadi one on one, on some poses,” Chris Aceto shared.

Thus far, Derek Lunsford and his coach Hany Rambod have made no mention of doing the 2023 Arnold Classic. The former 212 Olympia winner shared a physique update a few days ago, which many interpreted as a hint of his impending return.

While fans are unsure of Lunsford’s entry, Walker will still face plenty of competition in less than two months. ‘The Mutant’ is a definite favorite heading into the 2023 AC, but King Kamali won’t be counting out Andrew Jacked.

RELATED: Nick Walker Breaks Down 2022 Mr. Olympia Results: ‘I Could’ve Been Second… Andrew Jacked Made Us Look Like Amateurs’