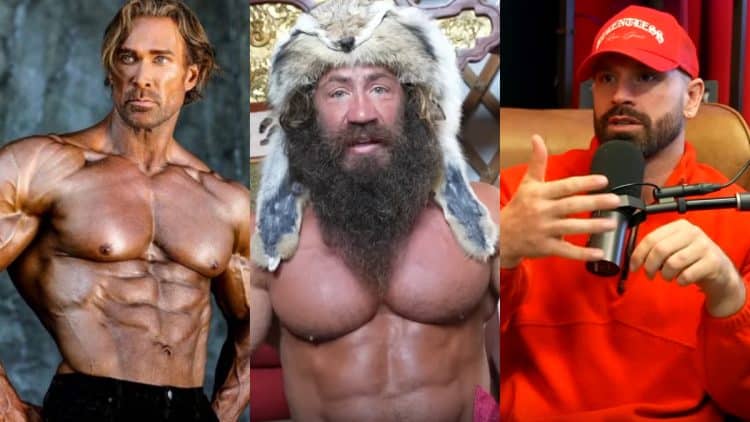 Fitness influencer Bradley Martyn has carved his own space in the community with his insane strength and entertaining content. Recently, Martyn shared his thoughts on the exposé of Liver King and highlighted the reason why other alleged fake naturals like The Rock and Mike O’Hearn have not faced the same consequences.

Internet sensation Liver King, real name Brian Johnson, made headlines for his monstrous physique and unique eating habits online. He regularly shares clips of himself devouring raw meat and organs such as liver, brain, bull testicles, and other cuts. He advocates for following an ancestral lifestyle based on the nine tenets.

Johnson’s insane build drew the suspicion of steroid use by many. The 45-year-old strongly denied the steroid allegations on several occasions. UFC color commentator Joe Rogan suggested that Johnson was playing a gimmick and thought he was definitely using steroids and PEDs.

Performance-enhancing drugs (PED) expert Derek of MPMD exposed Liver King’s lie of being natty by presenting leaked emails that showed Johnson’s alleged blood work and steroid cycle. As a result, Johnson admitted he lied and misled his followers while promoting his supplement companies.

Following the exposé, Rogan hosted Derek on his popular podcast show and called on Dwayne ‘The Rock’ Johnson to come clean about using steroids as well.

In a recent YouTube video, Bradley Martyn shared his thoughts on the exposé of Liver King. Martyn believes Johnson’s constant denial of steroid use eventually led to his downfall.

“I knew it,” said Martyn. “I mean it’s very common obviously but I think he took it to a different level because you know when he did that circuit, and I’m not trying to disrespect Bryan or Liver King, I think there’s a lot of other things that he’s talked about that are actually beneficial to a lot of people. But at the same time, to go on that circuit and say like, ‘I’m natty, I’m natty,’ and vehemently deny the whole thing.”

According to Martyn, The Rock is likely on steroids as well.

“If you want to just avoid a topic like The Rock. The Rock’s on gear. For him to say he’s not on gear is insane.”

Former Mr. Universe titleholder Mike O’Hearn is lauded for maintaining an incredibly jacked physique even into his 50s despite moving on from professional competition many years ago. There has been speculation about O’Hearn being on gear for the last several years.

O’Hearn refuted any allegations of ever taking steroids and even claimed that testosterone levels do not decline with age. Hormone therapy coach Dr. Rand opposed his claims and encouraged the general public to be cautious with what information they take to be fact.

Bradley Martyn drew a comparison between Liver King and Mike O’Hearn in regard to their alleged steroid use. He gave his opinion on why some celebrities keep quiet about using PEDs.

“Liver King got it out of hand. He said no so many times. It’s almost like the Mike O’Hearn thing, like O’Hearn’s been saying he’s natty since the beginning and it’s like, ‘but are you though?’ He’s f**king incredible. This is the thing with steroids that trips me out.

“People think that it’s because, and this is why people get this whole detailed thing around steroids and they don’t talk about it, is because they go, ‘they are going to take away your hard work of doing that.’ I gotta say that you can’t take steroids and just look like that.”

Although Martyn could understand why some won’t reveal their use of steroids, he had a hard time giving Liver King a free pass due to the fact that he was misleading people into buying his supplements.

“It’s going to enhance you, make things happen faster that would have already happened if you put in the effort and energy. I just think people get so caught up that they want to take it away. That’s why these people are afraid of just specifically talking about it.

“Then it’s like, they just don’t talk about it but it’s the ones who go, ‘no, I’m natty,’ they’re vehement about it and then they’re selling products. That’s when it gets dicey.”

Liver King was recently in the news cycle but found himself in hot water. A New York-based man sued Johnson for $25 million for “conning” consumers into buying products from his companies while portraying himself as a natural.

Liver King has since opened up about his use of steroids and stopped taking them in hopes of earning back the trust of his fans. He shared a physique update after quitting steroids for a week, where he looked significantly downsized.