Bodybuilder Nick Walker Shows Huge Varicose Veins in Calves During Recent Update, Is It Cause for Concern?

Even Arnold Schwarzenegger scrutinized them when he saw "The Mutant" in Ohio last year at the 2021 Arnold Classic. 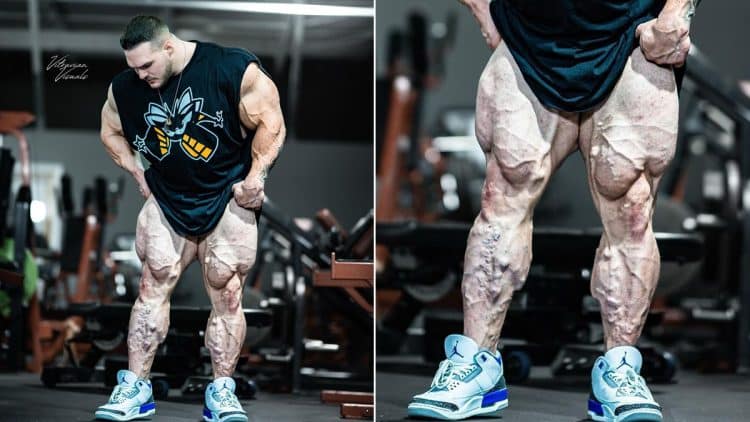 Rising Men’s Open star Nick Walker is on a quest to become Mr. Olympia and will test his resolve against the world’s best this December. After showing off a quad pump in a recent physique update, fans are wondering if Nick Walker’s huge veins are cause for concern.

Walker emerged as an imposing threat with detailed conditioning, freaky muscle mass, and some of the biggest arms in the league. During his rookie year, “The Mutant” kicked off the season with a dominant victory at the 2021 New York Pro show.

From there, he brought his physique to the 2021 Arnold Classic contest and won handily. However, bodybuilding legend Arnold Schwarzenegger pointed out Walker’s thick varicose veins on the live broadcast with retired Pro Dennis James.

Schwarzenegger expressed concern and was curious why they were so thick.

“What’s the story with his veins in the calves in the front — I’ve never seen that before. Schwarzenegger said. “Yeah, but there’s definitely something going on there. It’s definitely too thick those veins. I would definitely have that checked out.”

Walker’s veins, also called spider veins (Telangiectasia), are largely genetic and common in legs. This condition is caused by damaged walls and/or valves within the veins.

Since veins are one-way valves that open and close to bring blood to the heart, damaged or weak valves in the vein can cause backflow, which results in swollen or large and twisted veins. Oftentimes, varicose veins are a cosmetic issue and don’t require immediate medical attention.

In a recent post made to Instagram, Walker showed off his legs following a quad-pumping training session. It should be noted that in the past, Walker has said his veins are genetic and aren’t causing him problems.

“Hamstring day, but got a nice quad pump at the end.” Walker wrote on Wednesday.

In addition to countless compliments to his physique, some fans questioned the pronounced varicose vein development in Walker’s calves and shins. One fan suggested that a Mr. Olympia “shouldn’t have legs like that.” 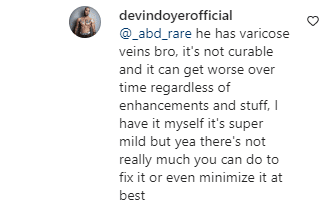 Despite his followers focusing on the veins in his legs, Walker isn’t letting any noise get in the way while prepping his body for a second Mr. Olympia appearance. He routinely shares training sessions as preparations heat up for bodybuilding’s most important show of the year. Earlier this month, he was spotted training quads with fellow Men’s Open competitor Brett Wilkin.

Walker doesn’t mind training with his rivals. He also pumped iron with 2019 Mr. Olympia Brandon Curry — the two demolished an insane shoulder workout as they continue to prep their physiques for 2022 Mr. Olympia. Curry will also return to the Olympia stage later this year.

Additionally, Walker has worked out alongside reigning 212 Olympia champion Derek Lunsford, who received his special invitation to compete in the Men’s Open division at Olympia this year. And Walker also connected with former 212 Olympia Kamal Elgargni, who recently tried out the Open class. The two have become regular training partners since Walker’s move to Florida.

A judging panel changes show to show, and it remains uncertain if Walker’s varicose veins will hinder his chances of becoming Mr. Olympia. From what he’s shared thus far, Walker’s preparations for this year’s Olympia contest are going according to plan. While fans and even Schwarzenegger have pointed out his thick veins, Walker is drowning out the noise and focused on winning his first Sandow trophy.

How To Do The Rear Deltoid Stretch