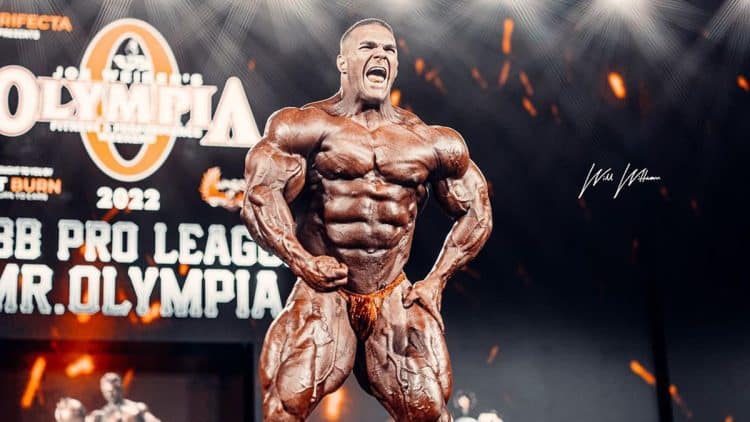 Bodybuilder Nick Walker is coming off a phenomenal appearance at the 2022 Mr. Olympia, held Dec. 16-17 at the Planet Hollywood Resort & Casino in Las Vegas, Nevada. In a recent post made to Instagram, Walker shared his reaction to getting third place in the Men’s Open division.

Nick Walker made headlines for his jacked physique in the IFBB Pro League last year. He turned in an impressive 2021 season, kicking things off with a win at the New York Pro. He continued his dominant run at the Arnold Sports Festival, where he took home the top prize.

There was a lot of hype surrounding Walker’s Olympia debut in 2021 and he did not disappoint. He managed to secure a top-five finish in his first showing and gained a lot of support from the community. There was some controversy around Walker placing a rank below Hunter Labrada as many believed ‘The Mutant’ had a better package.

Walker had formed a strong partnership with longtime coach Matt Jansen, who helped him during his rookie season. In February, Walker announced that he was no longer working with Jansen. Given the immense success they achieved together, there were doubts over Walker’s performance at the 2022 Mr. Olympia.

Walker went on to partner with Dominick Mutascio, popularly known as Dom Supersliced, to get ready for the most prestigious fitness showcase in the world. While things appeared to be going well between the two, Walker chose to rejoin Jansen in September.

Despite the difficulties, ‘The Mutant’ looked to be in better shape than ever. He gained a lot of attention for his enhanced muscle maturity and a slimmer waist. Two-time Mr. Olympia champion Mamdouh ‘Big Ramy’ Elssbiay’s coach Chad Nicholls backed Walker as a frontrunner for the title and even went as far as to say that he had the potential to dethrone Ramy.

His impressive size helped him earn third place, a significant improvement from his fifth-place finish in the previous year. A strong performance by Walker indicates that he is a formidable force in the world of bodybuilding and that he will continue to be a threat for many years to come.

Nick Walker opens up on third-place finish at 2022 Mr. Olympia

In a recent Instagram post, Nick Walker opened up about winning third place at the 2022 Mr. Olympia.

“Wanted to bring a different style routine for ya instead of my regular most muscular shots, I think mission accomplished here. This Olympia was special one for me. As bad as I want to win because I’m so competitive by nature. This was a win for me in so many ways for that I’m beyond grateful.”

He followed up with another post expressing his gratitude for coach Jansen and celebrating the bond they share.

“When we got back together 12 weeks out from this show. I didn’t just get back with my coach, I got back with my best friend, someone I consider family, and always will consider family. I believe during these past 12 weeks it has brought us closer then ever before. Honestly that’s all I wanted. I told him I would give him everything I have for this prep as he said you know I’ll give you my all. Now honestly with the mental struggles I had going on this year. It would have been a win for me if I got 5th place again.

“During this prep I started to get my confidence back, and we both began to believe I could win this show. Of course we didn’t get that outcome but we moved up to 2 spots and got the peoples choice. Which is a HUGE WIN!!!!!!! During this time the old me was back, I thank you for playing a big role in that happening. I just want you to know what we were able to accomplish together during this time and become closer then ever before was a huge win for me. On and off the stage.

“I told you “I started my pro career with you and it will end with you” I will be your first open Olympia winner. Thank you for everything bro, I love you.”

The ever-consistent Hadi Choopan turned out to be the athlete to dethrone Ramy and finally won his first Sandow trophy. Nick Walker brought arguably his best package ever to the stages of Mr. Olympia. He was also crowned the 2022 People’s Champ for the first time.

As one of the most promising young athletes in the league, Nick Walker has clearly stood out from the rest. Perhaps most importantly, Walker is still very young and has a lot of potential for growth and success in his career. There is no doubt that Mutant can become Mr. Olympia in the near future if he continues to show the same level of passion and consistency.