Hadi Choopan becomes the 2022 Mr. Olympia after years of struggle and perseverance 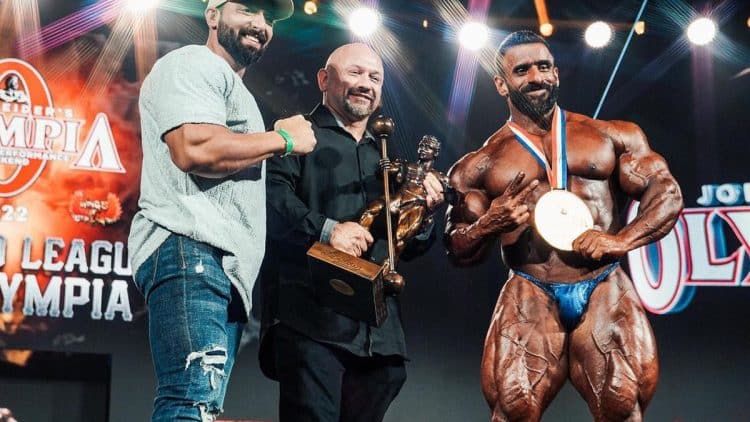 Hadi Choopan has won the 2022 Mr. Olympia title. Yes, after dedicating his life to the sport of bodybuilding and dealing with a fair share of adversities, the Iranian bodybuilder now sits among the handful of elite bodybuilders that hold the distinction of wearing the Mr. Olympia crown.

The reigning 2-time Mr. Olympia Mamdouh ‘Big Ramy’ Elssbiay was a favourite heading into the 2022 Mr. Olympia competition. Although Hadi Choopan had consistently maintained a top four spot for the past three years, the rise of new contenders pushed his name under the carpet in the build-up to the show. However, The Persian Wolf proved that he was miles ahead and walked away with the win. Winning the 2022 Mr. Olympia title is of course a big achievement in itself. However, Hadi Choopan was able to pull off the massive win against arguably the most difficult line-up in quite a few years makes the win a lot more impressive.

Attaining champion’s status in any sport is an incredibly rare achievement for competitive athletes. An athlete has to find the right coaches, work hard, overcome injuries and maintain consistency to eventually reach the top. Sadly but undeniably, working the way around politics of the sport is also a part and parcel of this whole process. Hadi Choopan had to deal with all of this and some more to reach the pinnacle of bodybuilding and become Mr. Olympia.

Hadi Choopan made a name competing in the regional circuits and also won the gold medal at the WBPF World Bodybuilding championships in 2013, 2014 and 2015. However, his career elevated to a new level starting in 2017. This was also the time when he started training with renowned bodybuilding coach Hany Rambod.

The bodybuilding community took notice of Choopan when he competed against 7-time 212 Olympia champion Flex Lewis at the 2017 Asia Grand Prix. Although Choopan lost to Lewis at the show, many believed that he deserved the nod from judges. Even in loss, Choopan’s stock rose considerably and he became the talk of the town. As Choopan was getting ready to show his talent to the global audiences and compete against the best, the geopolitical relations between the USA and Islamic Republic of Iran were showing no signs of improvement. Hadi Choopan faced the brunt of travel restrictions for Iranian citizens. He was forced out of major competitions due to visa issues, namely the 2018 Arnold Classic and Olympia.

However, the tides turned in 2019 and Choopan arrived on American soil for Olympia. In spite of being a long time 212 division competitor, The Persian Wolf decided to compete in the Men’s Open division. Many believed that the relatively smaller Iranian stood no chance against the mass monsters that the division was home to. Instead, Choopan went on to prove everyone wrong and secured an impressive third-place finish at the 2019 Olympia. He remained in the top five for the next two years, scoring a fourth place finish at the 2020 Olympia and reclaiming the third spot at the 2021 Olympia.

Hadi Choopan is a four-time Mr. Olympia participant and has never finished outside of the top five so far in his career. Remarkably, he has dealt with the stress of last minute cancellation during every competition prep due to travel restrictions and visa issues. Even though the prospects of making it to the Olympia stage have been hanging by a thread for all these years, Hadi Choopan has only improved year after year and brought a significantly improved physique on every occasion.

Choopan’s coach Hany Rambod shed light on these struggles a few months ago and revealed that his pupil arrived in the USA one day before the 2020 Olympia but still paved his way into the top five.

“We have done anywhere from one and a half days i.e. 2020. He literally came a day and a half before Olympia. He was still holding water from the flight right before pre-judging where we had to turn his water and everything because he had such a long flight getting into Orlando,” Hany Rambod stated.

It is relatively easier for bodybuilders from other middle-eastern countries to travel to a destination like UAE and train with their coaches. However, Hadi Choopan has not had the luxury due to the aforementioned travel restrictions. He trained in Iran for the most part and had to make best use of smartphone and internet to train with Hany Rambod. Additionally, Choopan only speaks Farsi and has to rely on his family or friends to understand Rambod’s training instructions. But Choopan did a great job of training remotely. His efforts translated into winning the most prestigious professional bodybuilding title.

The Islamic Republic of Iran is witnessing social unrest and women’s protests that have entered the fourth month. An Iranian Kurdish woman, Mahsa Amini, went into a coma after she was arrested in Iran’s capital Tehran in September for not wearing the Hijab properly. She passed away three days later. Her death sparked nationwide protests that are met with a violent response from the government. It started as a women’s rights movement initially but quickly became an all-encompassing agitation against the authorities.

Bob Cicherillo interviewed Hadi Choopan following his 2022 Mr. Olympia victory. Choopan used his time on the mic to draw attention to these protests and dedicated his medal to all the Iranian women in an emotional message.

“I dedicate this medal to all the noble women of Iran and the people of Iran wherever they are. And I hope racism ceases to exist among us and that we can all be friends and be proud of each other no matter what country we’re from,” Translated from Hadi Choopan’s Farsi message.

“This is like a first born child for me” Hadi Choopan on his 2022 Mr. Olympia win

The RXMuscle website interviewed Hadi Choopan following his 2022 Mr. Olympia win. Upon being asked how he felt about winning the title, Hadi Choopan compared his Sandows win to the joy of welcoming a first born child.

“This is like a child for me… My first child. I am as happy as having the first born child! I dedicate this championship win to my fans all over the world, especially the Iranian people as this is the first time we take the Sandow’s trophy to Iran!” Translated from Hadi Choopan’s Farsi statement.

You can watch the full video here, courtesy of RxMuscle YouTube channel:

In an interview for NPC News Online, Neil Cash asked Hadi Choopan and Hany Rambod to talk about the off-season gains competition prep. Rambod stated that 90 percent of it was because of the diet. He added that Choopan was able to fly to the USA two months in advance. It helped them to game plan , train and go through every aspect of the contest preparation together. Rambod added:

“He has been training heavier than he ever has. He has been able to keep his calories higher because the game plan in the past was always condition to condition. This time, it was 10 percent less conditioning with 28 percent more fullness and more size and that’s when he came in heavier.”

Hadi Choopan always had excellent conditioning. However, Rambod stated that he could have benefited with size last year. Therefore, he added 10lbs to his frame this year and came in with a 234 lbs physique at the 2022 Olympia.

You can watch the full interview here, courtesy of NPCNewsOnline YouTube channel:

Could Hadi Choopan’s 2022 Mr. Olympia win be the beginning of a new era?

As a competitive sport, bodybuilding aims to display a perfect blend of muscle mass, definition, symmetry and proportions to create an aesthetically impressive physique. The Men’s Open division has been at the forefront of this goal for the longest time. However, it has dealt with a fair share of criticism for giving importance to mass and size over other attributes in recent years. Some of the most influential voices in the bodybuilding community predicted a rapid decline of the Men’s Open division as the rise of divisions like the Classic Physique seemed to be taking over the sport.

A former 212 competitor Hadi Choopan’s win at the 2022 Mr. Olympia proved that being a mass monster is not a prerequisite to win the title anymore. Even the former 212 Olympia champion Derek Lunsford, who held the runner-up spot at the 2022 Olympia, will also be a frontrunner in a race to dethrone Choopan at the 2023 Olympia.

Choopan’s and Lunsford’s absolute takeover of the Men’s Open division should be an eye opener. It may compel them to take a different route and give equal importance to other attributes.

Does that mean Hadi Choopan and Derek Lunsford are unbeatable in the Men’s Open division? Absolutely not. However, their rise sent a strong message that size alone will not determine the outcome… A combination of mass, definition, symmetry and proportions will!