After winning the 2022 classic physique Olympia, Chris Bumstead has announced that he does not intend to slow down anytime soon, and plans to compete for his fifth title next year. 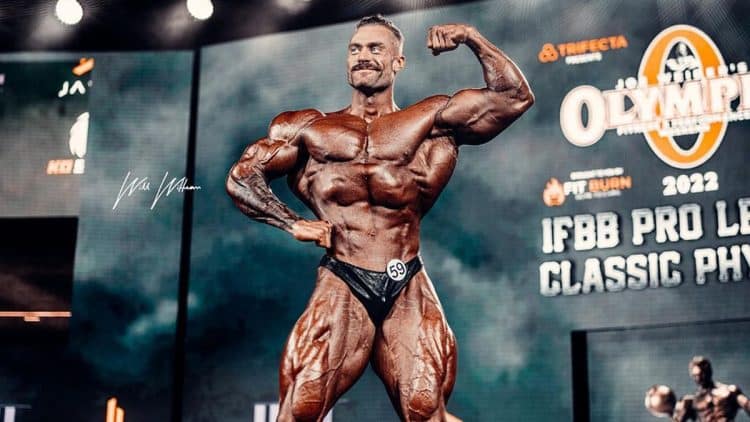 Reigning Classic Physique champion Chris Bumstead etched his name in the history books with a four-peat at the 2022 Mr. Olympia, held Dec. 16-17 at the Planet Hollywood Resort & Casino in Las Vegas, Nevada. He announced his ambitions on stage after the win and shared his thoughts on a potential move to the Men’s Open division.

Canadian bodybuilder Chris Bumstead is easily one of the most popular athletes in the sport with more than 12.7 million followers on Instagram. He first gained attention in the IFBB Pro League as a Classic Physique competitor. In 2017, Bumstead turned in an incredible season that saw him win the Pittsburgh Pro and the Toronto Pro Supershow before making his way to Olympia. His potential was evident from the start as he finished runner-up in his debut.

In 2019, Bumstead won his first Olympia title by dethroning former two-time champion, Breon Ansley. ‘CBum’ proved to be a dominant victor as he held on to the throne every year since winning it. He entered the 2022 Mr. Olympia looking to extend his reign at the top and add the fourth trophy under his belt.

Bumstead achieved the majority of his success working with his longtime mentor and friend Iain Valliere. When he announced that he would no longer be working with Valliere, there were doubts over Bumstead’s performance this season. The pair appeared to end things amicably as Valliere, a Men’s Open standout, wanted to focus on his own career.

Renowned bodybuilding guru Hany Rambod took Bumstead under his wing in October, just two months out of the most prestigious fitness showcase in the world.

The first call included Chris Bumstead, Ramon Rocha Queiroz, and Terrence Ruffin, as expected. Bumstead and Ramon Dino were invited to the center for a comparison, which caused the audience to erupt with excitement. Many believe Queiroz to be a serious threat to this year’s title. Breon Ansley and Urs Kalecinski were also included in the first call-out.

After a series of callouts, a clear top tier emerged among the competitors. During the final comparison, Bumstead and Ramon Dino are called back out to the stage, and the judges entertain the audience by having them pose for the camera.

In the end, Chris Bumstead managed to ward off budding contenders Ramon Rocha Queiroz and Urs Kalecinski to defend his title successfully and become the 2022 Classic Physique Olympia champion. It would also mark the last time former victor Breon Ansley competed in the category as he eyed a move to the Men’s 212 division.

In the on-stage interview with Bob Cicherillo following his win, Chris Bumstead shared his thoughts on the performance and declared his quest for the fifth title.

“It feels damn good. It’s hard to explain to be completely honest. It feels really beautiful being up here again. It felt so good to be pushed by these guys; there were 59 of us on stage so a round of applause for the amazing competitors in the Classic Physique. This division is so exciting to be a part of and I’m so grateful to be here and at the top of it this year. They really pushed me to be my best.

“It’s been a beautiful year for me. There’s been a lot of talk of my retirement for whatever reason. I’m not retiring. Don’t worry guys, I’m not going away. I’m here. I love what I’m doing. But I think it’s beautiful that people thought that.

It shows I’m learning to really enjoy the moment, the journey, and be present in this… I think the fact that people think I’m done is because I’m actually here enjoying it now… Come back next year for number five. I’m ready to rock it. I can’t wait to be back here next year. Let’s do it all again.”

It’s evident that Chris Bumstead has no plans to slow down anytime soon as he looks forward to competing again in the next edition.

Bumstead has no plans of moving to the Open division

During a backstage interview with Flex Wheeler, ‘CBum’ shared his reaction to the victory and argued against making a move to the Open division.

“It feels damn good. It’s crazy the love and support I have behind me, just knowing it’s worth it for them, myself, and everything we put in it. It’s beautiful, the moments I get to share on stage with my loved ones, myself. I really can’t explain. It’s priceless and I’m just soaking it all in.”

“The only way I’m going to the Open is if it’s for fun four weeks out of a Classic show. People don’t realize how hard I push my body to get to this size; it’s not easy for me. So, I think my body fits just right in Classic.

I make weight easy every year. I’m not pushing the weight limit at all. I’m not growing out of my class. I might be able to hold more muscle in my frame but I’m pushing my body to be this big.”

Watch the backstage interview below:

Chris Bumstead stands as the winningest athlete in the history of Classic Physique Mr. Olympia competitions with four consecutive trophies on his glittering resume.