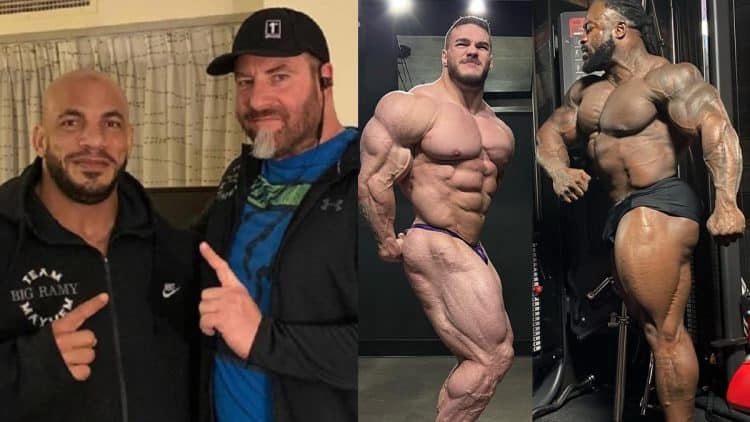 The biggest event in bodybuilding is just two weeks away and all eyes are on Mamdouh ‘Big Ramy’ Elssbiay as he looks to pick up his third-straight title at 2022 Olympia. In an interview with Desktop Bodybuilding, Ramy’s coach Chad Nicholls discussed a path to victory for contenders William Bonac and Nick Walker.
This year’s Olympia lineup is overflowing with talent. Contenders Brandon Curry and Hadi Choopan are making every second count at the gym. Meanwhile, new blood in the IFBB arose when rookies Michal Krizo and Andrew Jacked secured their pro cards/Olympia invitations. Veterans of the sport, however, continue to call for a showdown between Big Ramy and Nick Walker.

Walker has ambitious plans for next month, especially after placing fifth at 2021 Mr. Olympia. He’s been open with fans about his training regimen and future goals. Before hanging up his trunks, Walker hopes to win as many Arnolds and Olympias as he can. Bodybuilding veteran King Kamali was the latest to back Walker as a legitimate title contender. Kamali believes if Walker brings ‘Hadi Choopan-type’ conditioning, he’s a shoo-in to win the contest.
In addition to Walker, Chad Nicholls is adamant William Bonac might push Ramy on stage as well. He offered his top six for 2022 Mr. Olympia, and to no surprise, he placed both of his clients in the top two. During the recent podcast appearance, Nicholls laid out what it would take for Walker or Bonac to overthrow the current champion.

Chad Nicholls: The Only Way to Beat Big Ramy Is With Something ‘Different and Freaky’

Nicholls said Walker and Bonac would have to bring ‘freaky compact muscle’ to give Ramy a run for his money.

Since Ramy is likely to be the biggest bodybuilder on stage, Nicholls specified that it would take ‘something different’ from Walker or Bonac to defeat the sitting champion.

While Chad acknowledges the structure of Curry, he doesn’t believe it will be enough on stage.

I like Brandon [Curry], but we’ve seen Brandon. Structurally he’s very very good. But… is that enough to dethrone a champion? There’s a lot of structural great guys. Is it enough? It’s not going to be enough.
He’s going to have to have a comparable muscle size, and superior conditioning to go with all of that — and everybody will. They’re going to have to match something to get in the mix or to even have a chance at battling him,” Chad Nicholls explained.

Nicholls: ‘If You Look At Nick Walker, You Can Tell They’re Not Playing Around’

Unlike Bonac, who admitted to playing the ‘size game,’ Nicholls praised Walker and his team for prioritizing conditioning.

“William — I think he knows this is the year where he has to push in and he has to show the judges something they are blown away by, says Nicholls. “If you look at Walker you can tell they’re not playing around. They’re not trying to play the size game.
You can tell he [Nick Walker and Matt Jansen] is going for conditioning across the board, smart move. And I think that’s what we’re going to see several guys do. Hadi Choopan will do the same thing. He’s in a tricky position because he pushed it all in last year.”

Earlier this month, bodybuilding legend Flex Wheeler urged Bonac to stop playing the size game against Ramy. Wheeler said it would lead to Bonac’s downfall. He added that he made the same mistake throughout his career when he tried chasing the eight-time Mr. Olympia Ronnie Coleman.

RELATED: Ronnie Coleman Talks How Chad Nicholls Helped Him Become The King Of Bodybuilding
Nicholls is confident heading into this year’s Olympia and believes Ramy is on track to bring his best physique of all time. According to Chad, structure and conditioning won’t be enough to stop Ramy, but Walker and Bonac have the best chance due to their freaky muscularity.