Check out the current point standings after the first three events of the 2022 World's Strongest Man finals. 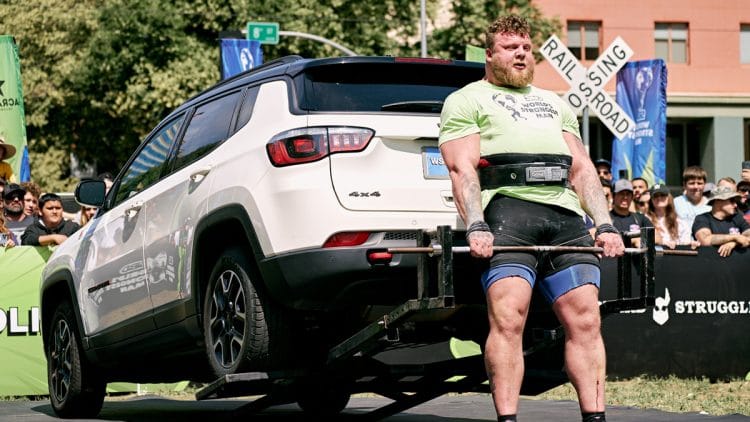 Day one of the finals featured the KNAACK Giant’s Medley, Deadlift, and Flintstone Barbell events. The lineup for the 2022 WSM Finals consists of ten competitors, who all previously earned their places with brilliant performances in the qualifiers. Of those ten athletes, four have won the WSM contest at some point in the past (Brian Shaw, Martins Licis, Oleksii Novikov, Tom Stoltman). The roster for this year just proves how competitive it is.

There is no livestream for the most prestigious Strongman contest this year. You can still keep track of every important news and result regarding the 2022 World’s Strongest Man here on Fitness Volt.

Related: Shane Flowers Out Of The 2022 World’s Strongest Man Due to Injury

The first event of the 2022 World’s Strongest Man was of a medley format. The competitors had to carry two 120-kilogram (265-pound) boxes, followed by the 455-kilogram (1,003-pound) yoke. Each of the three implements had to be carried for a length of 10 meters, while the time cap was set at 75 seconds.

The debutant from Canada, Mitchell Hooper, has won the first event of the 2022 World’s Strongest Man, despite this being his first international competition. Following his incredible performances in the qualifying stages, Mitchell has now arisen as a very plausible winner of the 2022 WSM. Tom Stoltman claimed the second place in this event, as he beat Oleksii Novikov by less than one tenth of a second.

The 2022 World’s Strongest Man finals also featured the Car Deadlift event. The competitors were required to deadlift as many reps as possible using a car, which weighed 360 kilograms (794 pounds). The destined time cap for this event stood at 60 seconds.

We got to see a quick turnaround already on the second event of the 2022 World’s Strongest Man finals. Oleksii Novikov won the event with a very dominant display. On average, Oleksii took four seconds to complete each repetition. This insinuates that he did not rest at all, but just kept lifting until the time was up. Tom Stoltman and Trey Mitchell shared the second-place finish in this event, as they pulled 13 incredible repetitions each.

Hooper, Licis, and Shaw all deadlifted twelve repetitions. Unfortunately for them, their three way point share means that they lose out on many potential points.

The Flintstone Barbell, also known as a behind-the-neck press, is one of the greatest classic Strongman events of all time. The “Flintstone” element of this event were the plates, which looked like they were made of stone. The competitors attempted to lift as much as they could, with the opening weight being 170 kilograms (375 pounds).

Oleksii Novikov was absolutely in the league of his own in the Flintstone Barbell event, so he claimed his second event win of the day. He is finishing day one of the 2022 WSM finals as the overall leader. Tom Stoltman was consistently chasing Oleksii, but he did not want to attempt to press 246 kilograms (542 pounds). However, Tom did earn nine points by finishing in second place.

Martins Licis scored some massive points in this event, as he placed third by pressing 235 kilograms. Four athletes followed Martins and they lifted the exact same weight. Shaw, Hooper, Boudreault, and Luke Stoltman all shared the 4th place.

Just one more day until we find out who the World’s Strongest Man of 2022 will be. Three more events are scheduled for tomorrow, so the winner is still very far from being decided.

Watch the daily recap show presented by ‘The Beard Struggle’, and hosted by the 15x WSM competitor, Terry Hollands:

Still To Come For The 2022 World’s Strongest Man