Brian Shaw and Kevin Faires performed a set of heavy behind the neck presses. 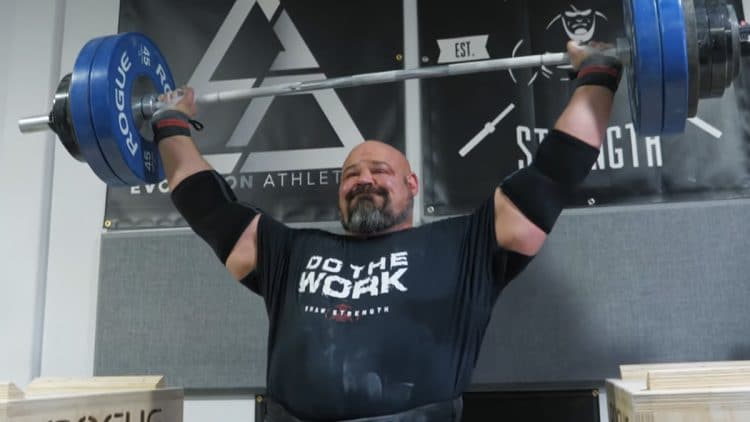 Brian Shaw has once again got together with another strongman for a training session. This time it was the Dinnie Stones World Record Holder, Kevin Faires, who was featured on Brian’s YouTube channel. The pair got together for a workout and the primary aim was to improve the behind-the-neck press. They progressively upped the weight and ended up lifting an insane 425 lbs (193 kg).

It has been rumored that the max behind the neck press will be one of the events at the 2022 World’s Strongest Man, which will take place from May 24-29, 2022, in Sacramento, California. Brian Shaw, Kevin Faires, and a bunch of other Strongman athletes have suddenly incorporated the exercise in their workouts, so it would not be surprising if the rumors are true.

The beginning position of the behind the neck press is similar to that of a high-bar squat, as the barbell rests across the traps. This exercise is also highly technical, as it requires finding and getting used to the right shoulder positioning.

Before the start of the workout, Brian Shaw introduced Kevin Faires and explained what his thought process was behind pairing up with multiple Strongman competitors.

“This is what it is all about, leading up to a big contest. It’s getting together with other athletes who can push me, and I can push them.”

The pair starts the workout by loading 135 lbs on the bar and performing a few repetitions of strict presses. After warming up with the strict shoulder presses, Shaw and Faires started generating some leg force, while also getting used to the push press motion. As it is a pretty unfamiliar movement to them, Shaw explained that:

“It is going to take a minute to feel the form out.”

Brian Shaw and Kevin Faires then upped the weight to 225 lbs (102 kg) and performed some explosive triples. For the third set, they added two 25 lbs plates on each side, and completed 2 powerful reps each.

After adding some more weight, the pair started doing consecutive singles. They pressed the weight and would drop it onto the blocks after every rep. As they progressively upped the weight, they got to 425 lbs (193 kg), and performed multiple sets of singles with it. They used a lifting belt, wrist wraps, and elbow sleeves to aid them in the lift.

“It’s a very technical thing, and for not doing it for a while, I think we did pretty alright,” said Faires.

“I think it’s a decent starting point… It’s a very technical lift, so the positioning, dialing that in and getting that line right,” said Shaw.

You can watch the full workout here:

Kevin Faires has already taken part in three World’s Strongest Man contests, and his greatest placing was 7th in 2020. He will definitely want to get to the finals this year, and wants to fight for a podium finish.

Brian Shaw, on the other hand, is arguably the greatest Strongman athlete in history, but he is aiming for his 5th World’s Strongest Man title, which would equal him with Mariusz Pudzianowski as the winningest of all time. At 40-years-old, Brian Shaw looks absolutely unstoppable, so it wouldn’t be a surprise if he remains on the highest level for a few more years.

Brian Shaw previously trained with elite strongmen Gabriel Peña and Jerry Pritchett to improve his skillset. He also thought that Kevin Faires is the perfect training partner for behind-the-neck shoulder presses, and it is fair to say that they had a very successful workout. There is no doubt that this is only the beginning, and that they will be ready if the behind-the-neck press becomes an actual event at the 2022 WSM.