"The Boogieman" feels he can beat his competition at the 2022 Olympia with bigger legs. 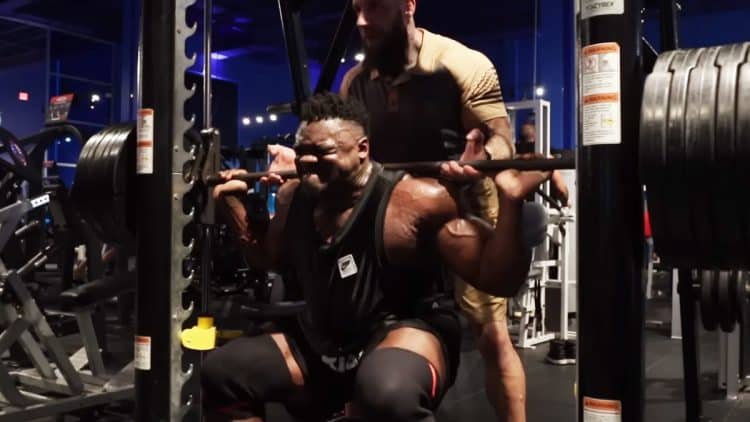 Blessing Awodibu is determined to turn his weakness into his biggest strength before he steps on stage at the 2022 Mr. Olympia. The Irishman rose to prominence as a popular social media influencer long before earning his IFBB Pro card. After making his professional bodybuilding debut with a third-place finish at the 2021 Indy Pro, Awodibu placed sixth at the 2021 New York Pro. Following his decent performances, he took an extended break from competition to improve his physique. The time spent in the gym produced good results as the 31-year-old returned to competition in 2022 with a bang. Securing wins at the 2022 New York Pro and the 2022 Indy Pro, Awodibu earned direct qualification to the 2022 Olympia.

The outspoken Irishman is one of the best self-promoters in the sport and has the knack to stir up controversies by igniting rivalries with fellow competitors. Awodibu developed a fierce rivalry with Nick Walker in the build-up to the 2021 NY Pro and seems to be at odds with the new IFBB Pro, Michal Krizo. Nevertheless, he has proven himself by backing up the talk with results on stage.

The 31-year-old will make his Olympia debut this year with a goal to dethrone reigning Mr. Olympia Mamdouh ‘Big Ramy’ Elssbiay. Awodibu’s competition prep is underway, and he recently went through a leg workout to make his quads his best body part. The video of this session was uploaded on Blessing Awodibu’s YouTube channel.

Awodibu currently has two leg days in his training routine. The first leg day — Monday (when this video was recorded) — is dedicated to quads and the second leg day — Friday — focuses on hamstrings.

Awodibu started the leg training session with hip adduction on the machine to target his inner thighs. Hip adduction is an essential exercise to warm up the quads and hamstrings.

Legs are admittedly Awodibu’s weakest body part because he gave more preference to upper body exercises during the earlier years of training. The Irishman still finds it a little difficult to enjoy certain lower body exercises, and hip adduction is one of them.

“But I still like to hit them up and make them work,” Awodibu clarified.

He performed four working sets of machine hip adduction and took to leg extensions next.

Leg extensions are one of the most recognized quad-isolation movements in gyms around the world. However, overdoing them or using a poor form can leave you with lasting knee damage. The Boogieman did this exercise with slow and controlled movement.

“My goal is to make the quads my best body part. Right now, they’re not. Still working on them. They’ve gotta come up a lot,” Awodibu said.

Starting with two warm-up sets, the 31-year-old cranked out four ‘nasty’ working sets of leg extensions. Following this, he took to the first compound movement of the day.

Smith machine squats were the first compound movement in Awodibu’s leg workout. The Boogieman revealed that he experienced severe knee pain while squatting. But thanks to stretching exercises and other therapies, Awodibu’s knees feel a lot better these days.

“I’ve got to listen to my body. But thank god right now I can squat. No more pain in my knees. Even before, I couldn’t do leg extensions because of the pain. But thank god…” Awodibu said.

Awodibu next took to the hip press on an adjustable machine that could be used to perform the exercise unilaterally to fix strength imbalances. The Boogieman annihilated his quads with three heavy sets of this movement and took to the next compound exercise.

Hack squats are an effective way to take the stress off the lower back and lift a lot heavier than you would on a traditional barbell squat. Additionally, this movement primarily targets the quads while the glutes and hamstrings take a supporting role. Awodibu crushed a few sets of this movement and moved on to the finisher of the day.

Awodibu stated that he has noticeable strength imbalances on his right and left sides. According to him, split squats have helped tremendously in fixing this issue. As a result, this compound movement has become a part of his training routine.

“It’s gonna be a lot of that today,” Awodibu said.

This movement served as the finisher of the day as Awodibu got a few good sets under his belt and wrapped up the training session.

While the Open division demands size, not every competitor can be as big as Big Ramy or yesteryear bodybuilders like Ronnie Coleman and Dorian Yates. Awodibu’s physique is by no means the biggest among the Open division roster. However, he feels that bodybuilders with symmetry and conditioning can be really hard to beat.

“A lot of guys underestimate the shape. When a guy has a beautiful shape, good symmetry, balance, separation… When a guy with a good shape like that comes in condition and is hard, shredded… it’s hard to beat, it’s really hard to beat,” Awodibu added.

The 2022 Olympia will feature bodybuilders like Shaun Clarida, Derek Lunsford, and Blessing Awodibu, that aren’t necessarily going to be the biggest individuals on stage. However, Awodibu feels that with aesthetics and proportions, they have the potential to beat the guys that rely too much on size alone. Awodibu is confident that he will be able to beat his competition with his conditioning.

“This year’s Olympia is going to be crisp because there’s a lot of guys with beautiful shape. They’re gonna be in Olympia for the first time. When those guys come in really f***ing conditioned, guys that think because of their sheer mass and condition will be enough to place them better at the Olympia… I’m sorry guys.”

“Me at my best, I’m extremely dangerous. I can stand next to anybody. I don’t have to be the same size as them. Me bringing my waist as small as it can be, conditioned hardest… I’ll always be able to create that illusion on stage which will make me appear bigger on stage than I actually am.”

The 2022 Olympia will take place from Dec. 15-18 in Las Vegas, NV. It will be a memorable event owing to the fierce competition in the stacked Open division. Will Blessing Awodibu shock the world and take home the Mr. Olympia trophy? Only time will tell.

You can watch the full workout video below, courtesy of Blessing Awodibu’s YouTube channel: