The IFBB Pro bodybuilder opened up about a career-threatening back injury and says it's 'getting to a point' where he needs painkillers to get through the day. 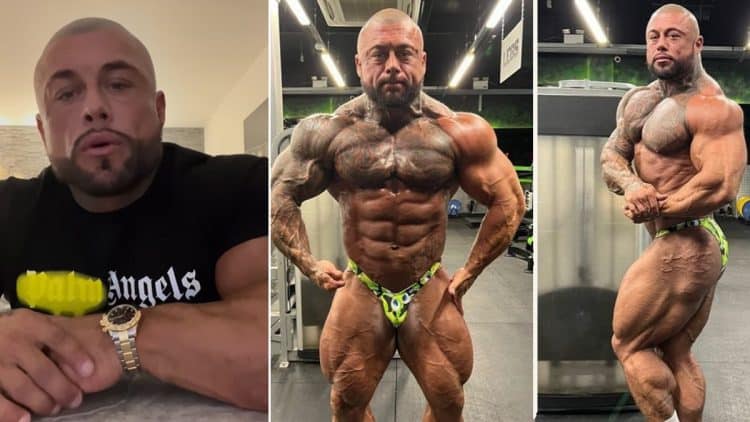 Bodybuilder Robert Taylor is qualified for the 2022 Mr. Olympia contest in the 212 division, but he won’t compete following a career-threatening back injury. In a series of posts shared via Instagram, Taylor discussed his back injury, current treatment plan, and what is next for his bodybuilding career.

Accidents and injuries often plague athletes of all sports, with bodybuilders being no exception. Sometimes these pesky injuries are just that — and they can be brushed off. However, there are times when athletes endure career-changing or even life-changing injuries.

Both appear to be the case for Robert Taylor, who led a successful IFBB Pro career. Taylor managed to earn a first place when he competed at the 2022 Muscle Contest Ireland recently in May. While he earned his 2022 Olympia qualification in the 212 division, disaster struck three weeks ago when he injured his back while performing hack squats.

All signs pointed to Taylor making his first Mr. Olympia appearance later this year. Despite his drive to succeed, Taylor’s health has been hampered by the painful injury. Making matters worse is the fact that he doesn’t want to stop training and needs painkillers to ‘get through the day.’ Given his current state of affairs, he sat down to discuss his situation and what it means for his bodybuilding career.

Robert Taylor Talks Dream-Crushing Back Injury, Pulls Out of 2022 Olympia

In a series of posts shared on Instagram, Robert Taylor discussed his recent back injury and his current treatment plan.

“Maybe about three weeks ago, I did [injured] my back in. If you’ve been following my stories, I appreciate everybody’s support. I did my back in at the gym. I took maybe 10 or 11 days trying to ride the storm. It’s not been easy to say the least, more mentally. Obviously, physically. If anybody knows me, they know I have a very high pain threshold. But mentally man… it’s sent me sideways.

Everybody around me can see it. I thought I gave it enough time — I’ve been having deep tissue work. I tried training legs on Wednesday, and it happened again. You know, it happened again on the step, on the hack squat. Just felt it going the first rep, nothing heavy, a couple of plates. Then, back to the drawing board.” says Rob Taylor.

According to Taylor, he’s taking an anti-inflammatory drug called Naproxen, Omeprazole for stomach discomfort, and painkillers ‘to get through the day.’

“It’s getting to a point now, where I’m relying on painkillers to get me through the day. They’re making me tired. Even my lower back — it’s unreal man. Even a man like me, with the will and drive to success so bad, that something I’ve worked all my life for — all my fuc**ng life. ”

Taylor’s dream involved him competing on the prized Mr. Olympia stage one day. However, it looks like he’s closing that chapter on his career.

“Growing up as a bodybuilder, we’re all dreaming to get to Mr. Olympia. This was going to be my last show. My last ride. It was never about the money for me. I don’t do bodybuilding for the money. Finance – I don’t need it. It’s always been about the love of the sport. Why I started was to get to Mr. Olympia. This is the closing chapter of my book.

I’ve always said I want to write the chapter of my book. I got the pen and I want to write that chapter. Once I done it, I can safely walk away and enjoy my family life. It’s getting to a point now, where I’m relying on painkillers to get me through the day,” Taylor shared.

Injured Robert Taylor ‘Scared,’ Feels Like He’s Going to ‘Disable Himself’ If He Continues Training

Robert Taylor fears if he keeps training and practicing the sport of bodybuilding, he’s going to make himself ‘disabled.’ When presented with the idea of prepping for 2022 Olympia, Taylor said, “it ain’t going to happen.”

“I’m losing myself as a man, as a father. I’m scared — with my fu***ng work ethic. My passion for bodybuilding. I’m going to make myself disabled. Plain and simple as this. I feel like I’m going to make myself disabled. Telling me to go in the gym, go steady — when you’re prepping for Mr. Olympia seven weeks out, it ain’t going to happen man. It ain’t going to happen.”

While trying to treat his back with painkillers, Taylor said he’s gone through serious mental trauma. He’s worried if he continues training, he’ll cause life-changing damage to his body.

“Like I say, I feel emotional inside. I feel mad, I feel angry, I feel upset. Everybody around me can see it. I’m not myself. I’m very quiet. I’m very closed off to the world because I’m going through some serious fu**ng mental fu**ng trauma.

This back is causing me murders. Like I said, deep tissue, be doing the painkillers, everything, taking every box trying to get over it. How long do I leave it before enough is enough,” Taylor pleaded.

Given the dangers present in the sport, Taylor is ending his prep to focus on life outside of bodybuilding.

“With a mindset like mine, I’ll tell you how fu***ng long: when I put myself in a wheelchair. And I ain’t that guy. I got a wife, I got two babies, one on the way. I got a wife and a life outside of bodybuilding. I’ve always said this, ‘if I notice anything wrong with my blood work or my body, I would stop,'” says Taylor. “So, guys, this is the end of the prep for me.”

“I gotta sit there and watch [2022] Olympia unfold without me being a part of it.

Taylor said he would stop training if anything went wrong with his blood work or body. And with good reason. There have been an alarming number of deaths shaking the sport of bodybuilding lately. This year saw former Arnold Classic winner Cedric McMillan pass away at 44, and popular NPC/IFBB Judge Jerry Ward die at 46. Just over the weekend, German bodybuilder Andreas Frey passed away in his sleep.

RELATED: How to Train Around Injuries Safely

Taylor won’t compete at 2022 Olympia, but at least he is ending his contest prep to address his health concerns. In time, hopefully, Robert Taylor will return to the Olympia stage with his health intact.