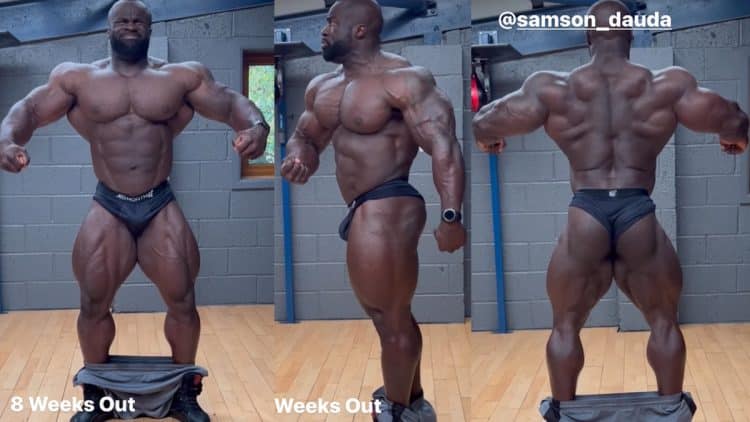 Mass monster Samson Dauda is a dark horse heading into this year’s Mr. Olympia contest, scheduled for December 15 – 18 in Las Vegas, Nevada. In a recent physique update made to Instagram, Dauda showcased arguably one of the best packages of his career with impressive muscularity and conditioning.

Last year, Dauda established himself as a threat in the Open class. He began his 2021 campaign with three pro shows that saw him reach the podium. First, he finished runner-up to Nathan De Asha at the 2021 Arnold UK, then found himself in third place at the Yamamoto Cup Pro. Dauda earned his 2022 Mr. Olympia qualification after claiming the EVLS Prague Pro title last November.

His competitive nature guided him to the 2022 Arnold Classic next, where he finished the prestigious show in fourth place. He landed outside the podium, but many fans were excited about his potential. While he attempted the 2022 Boston Pro a week later, he ended up getting fourth again.

Many figureheads and retired legends of the sport have dubbed this year’s Mr. Olympia contest as one of the greatest in years. Among the lineup is Samson Dauda, whose muscularity and size are on a different level compared to seasons prior.

In the off-season for this year, Dauda continued to put the Men’s Open division on notice with several promising updates, most of which saw him eclipsing 320 pounds. There are less than 8 weeks until bodybuilding’s most important event of the year and Dauda is the latest competitor to show off the fruits of his labor.

Samson Dauda Shares Massive Update, Can He Break into the Top 5 at 2022 Mr. Olympia?

In a recent post made to Instagram, Dauda and his coach, Milos Sarcev, shared his recent progress with a posing session eight weeks from 2022 Mr. Olympia.

This will be Samson Dauda’s first Mr. Olympia appearance. Despite that fact, fans and bodybuilders alike are confident he’s going to surprise a lot of athletes at 2022 Olympia. He will be challenged with facing a deep lineup of talent this year.

Reigning two-time Mr. Olympia Big Ramy is eager to keep the title in Egypt, and his physique updates would suggest as much. Before starting his contest prep, Ramy ended the off-season at a blistering 337 pounds. Retired Pro, Dennis James is helping him prepare for his next title defense.

Brandon Curry, who has been in shadow mode for much of the season, is training in Dubai to prepare his physique for this year’s Olympia contest. Many veterans see Curry as a viable contender. In fact, bodybuilding legend Lee Haney believes Curry has the best shot at dethroning Ramy as long as he doesn’t play the size game. Instead, Haney implored Curry to bring excellent muscle separation to overthrow the champ.

Samson can also expect to battle many of the heavy hitters from last year’s Olympia show. Fans are highly anticipating Hadi Choopan‘s Olympia return. Meanwhile, fourth-place finisher Hunter Labrada and rival Nick Walker are two contenders that many believe could shake up the contest.

From training, diet, to supplementation, Samson Dauda is tackling contest prep with a chip on his shoulder. There are still eight weeks until 2022 Mr. Olympia and Dauda’s conditioning would suggest he’s bringing the best package of his bodybuilding career.