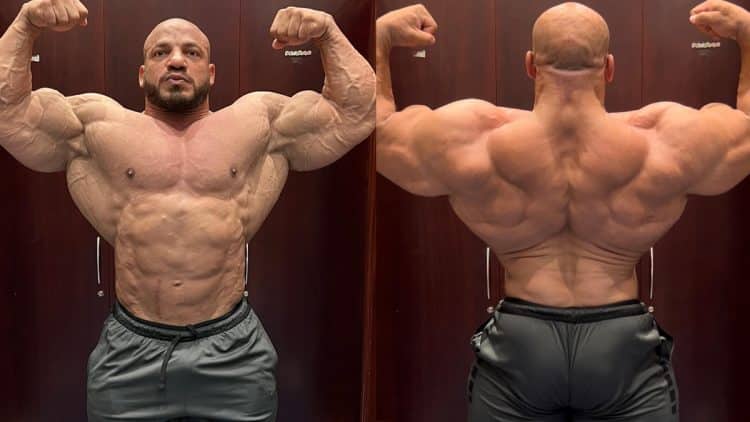 Reigning two-time Mr. Olympia champion Mamdouh ‘Big Ramy’ Elssbiay has greenlit the next stage of his preparations for this year’s bodybuilding season. In a recent post made to Instagram, Ramy showed off his final physique update before starting his contest diet for 2022 Mr. Olympia.

After missing a guest posing appearance at Jim Manion’s Pittsburgh Pro, many in the bodybuilding community began to count out the reigning champion. His commitment to the sport was brought into question as a result. While it remains unclear what his future plans are, Ramy told his children months ago that he wanted to retire at 38 following one more Olympia contest next year (2023).

During the off-season, Olympia President Dan Solomon gave Ramy a call to measure his passion for bodybuilding. Following the call, Solomon was impressed by Ramy’s tone as the champion promised to win a third Sandow this winter.

Preparing for his title defense, Ramy’s coach, Dennis James flew out to Dubai to help him train. Last month, Ramy sent shockwaves through the Men’s Open division when he shared a massive 337-pound physique update. It elicited such strong reactions from the community that even top threats like Nick Walker acknowledged that if the champion comes in shredded, he’ll probably win again at 2022 Mr. Olympia.

On September 22, 2022, the defending champion shared his last photos before embarking on his contest diet for this year’s Mr. Olympia.

Following his update, the comment section lit up with many from the community voicing their excitement about Ramy’s next stage of prep.

Unlike previous updates this season, Ramy gave fans a look at his back with a back double biceps pose. Earlier this month, he was accused by fans of using site enhancement oils like Synthol in his delts/shoulders. Despite the accusations, Ramy shared yet another photo of himself a week later, where his delts/shoulders didn’t look as pointy/inflamed.

While his coach James is impressed with the progress he’s made thus far, he expressed concern about Ramy’s back — specifically, his Trapezius muscle, which Dennis maintains is ‘not firing’ properly. Although, if you ask Ramy what his biggest weakness is, he believes it’s his conditioning. In spite of the ongoing issues, Dennis still predicts that 2022 Olympia will see Ramy at his “best ever.”

There are a number of Men’s Open competitors eying Ramy’s title, but the champion sees three bodybuilders in particular as his biggest threats.The first is William Bonac, whose muscle density and sharp conditioning nearly saw him win the 2022 Arnold Classic. Bonac won the Boston Pro earlier this year, where he punched his ticket to this year’s Olympia contest.

Additionally, Ramy named Brandon Curry as one of his biggest rivals. As a 2019 Mr. Olympia winner, Curry’s aesthetics, v-taper, and detailed separation have guided him to success. He plans to add size like Bonac to combat Ramy’s imposing stature later this year.

Lastly, Ramy believes consistent Olympia finisher Hadi Choopan could pose problems on the stage. “The Persian Wolf” has never placed below fourth place at Olympia and his strength in the off-season would suggest he’s been pushing himself harder than ever. His coach, Hany Rambod has hinted that Choopan will bring a “next level” package to the stage this winter.

Given the strong lineup of Men’s Open competitors this year, there is little to no room for errors in Elssbiay’s latter stages of prep. With his contest diet starting imminently, Ramy plans to bring his best look ever to the Olympia stage in December.