Samir Bannout on Kamal Elgargni and Steroids for Older Bodybuilders: ‘You Don’t Want to Push It at That Age’

Former Mr. Olympia Bannout questions the safety of Kamal Elgargni moving to the Open: 'keeping the mass sometimes at this age is not going to be easy' 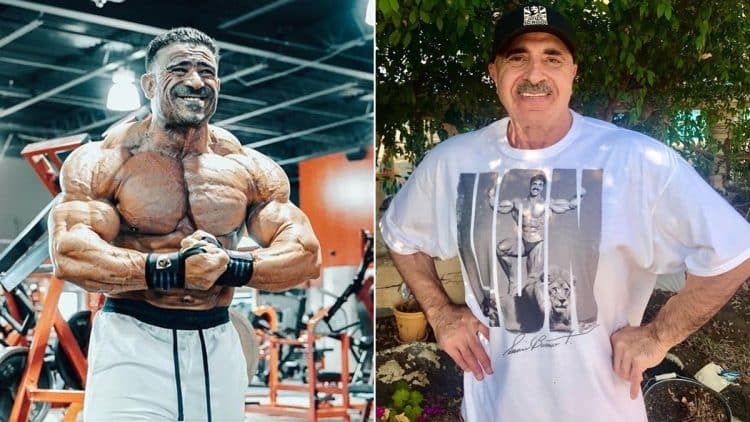 Samir Bannout, a former 1983 Mr. Olympia, has witnessed the sport take shape for most of his life. In a recent episode of the Muscle Maturity Podcast, Bannout discussed Kamal Elgargni’s move to the Open, and the dangers of ‘certain’ steroids with athletes around the age of 50.

Given Bannout’s credentials, he brings a special level of wisdom anytime he discusses bodybuilding. He has competed alongside Golden Era athletes known for aesthetics like three-time Mr. Olympia Frank Zane as well as bodybuilding legend Lee Haney, who holds eight Olympia titles.

Bannout routinely shares his opinions on podcasts while discussing some of the sport’s current events. As of late, former 212 Olympia champion Kamal Elgargni announced he will be competing in the Open class three times consecutively, starting with the Tampa Pro. Then he plans to also compete at the Texas Pro and the Ronnie Coleman Classic in the weeks after.

One of Bannout’s concerns for Elgargni is taking too much gear to keep up with younger competition. There have been an alarming number of deaths affecting the sport lately. Last year, former Mr. Olympia Shawn Rhoden passed away from suspected heart complications. In addition, George Peterson met his fate before getting the chance to compete at 2021 Olympia. Bannout has said in the past he believes Peterson died in part due to excessive dehydration.

2022 proved to be no different as the concerning trend continued. The late Cedric McMillan passed away at 44, which sent the bodybuilding community into a state of shock.

Just over last weekend, Jerry Ward, an NPC/IFBB Judge and Bodybuilder also died before turning the age of 50, though details surrounding his death have yet to be revealed. With Elgargni set to appear on stage in the coming weeks, Bannout gave his thoughts on the bodybuilder’s latest move.

During the video, Bannout talked about Elgargni competing over the age of 50 and some of the dangers that older bodybuilders face in the sport.

“I know Kamal personally for many, many years. We used to hang out and I used to help Kamal with posing a while back a few years ago, like ten years ago. Great guy but you know I think at 51 it’s not going to be you know… you career isn’t going to improve. So, Kamal, probably, if he held on to where he was he was still be very competitive. But we have to wait and see.” Samir Bannout said on the Muscle Maturity Podcast.

Bannout is impressed with anyone competing over the age of 40. He referenced Dexter “The Blade” Jackson‘s success as he got older.

“I’m impressed with anyone that competed over 40, seriously. Anyone that competed over 40 is impressive but once you reach 50, as you can see with Dexter Jackson, he started losing it around that time, but we were impressed anyways. Bannout said. “Kamal at 51 is unbelievable. The only one I knew that looked that good at that age was Albert Beckles.”

According to the former Mr. Olympia, there are certain types of steroids that older bodybuilders should avoid. He added that ‘certain androgens’ will thicken the blood of an athlete and affect their health.

“The only thing that scares me Nick and John, there are certain types of androgens you shouldn’t mess with when you’re over the age of 50. You should not touch certain androgens because your red blood cell count will go sky high. You should not do certain things. You know, I hate to say it, my friend Shawn Rhoden, may he rest in peace. He tried to stay big.

On the borderline of 50, and I’ve spoken with doctors and endocrinologists that say certain medications should not be used at this age. You know, I’m no different. We all have to use certain things to be competitive but there are certain things you should not touch at a certain age and really, the only fear is thickening your blood by taking that kind of androgen.” Samir Bannout said.

Bannout on Elgargni: “There Are Certain Things his Body Will Not Be Able to Handle”

Another one of Bannout’s concerns is that Kamal may struggle to keep the mass, as it’s more difficult to maintain that kind of size as you age.

“I worry about guys like Kamal at this age, trying to keep this mass and you know sometimes keeping the mass sometimes at this age is not going to be easy Nick. I hope he stays healthy. Health is wealth. At the end of the day, you don’t want to push it at that age. Let’s be honest.”

He added that the ‘competitive edge’ is so high in the sport, that going up against younger competition can put an older bodybuilder’s health at risk.

“The competitive edge right now is so high. The competition is difficult. In order for him to stay on that level, he has to do what the other guys are doing because you know at his age of 50, 51, he’s not going to be able to give a prime performance, naturally. So, using certain things to put him on that level… quite honestly, I think it’s quite dangerous.”

During his off-season, Kamal was spotted training alongside Nick Walker, who is known for his jarring size and muscularity in the Open. Bannout worries since Walker is only 27 years old, that it will be much harder for a 50-year-old to carry that much mass. He added, ‘do your best but don’t cross the line into the danger zone.’

“Nick is young and his body can still handle that, but I think Kamal’s body is not going to handle what we were talking about here. There are certain things his body will not be able to handle.” Bannout added. “I wish him well. I would say, Kamal, be careful. Be careful. Be healthy, do your best but don’t cross the line into the danger zone. That’s my honest opinion. I’m telling him that as a friend.”

This isn’t the first time Bannout has spoken out against the excessive use of steroids. The retired pro recently discussed Chris Bumstead‘s reduced cycle for this year. The Classic Physique champion revealed that he’s only taking two compounds as opposed to four or five. Bannout said bodybuilding legend Arnold Schwarzenegger also ‘looked at his best’ with only two compounds.

Given the intensity of the Open class and the need to keep up with the biggest athletes, Bannout believes older bodybuilders, like Elgargni, will struggle to carry that extra mass for extended periods of time. As athletes approach 50 years of age, Bannout is adamant that certain substances should not be taken.