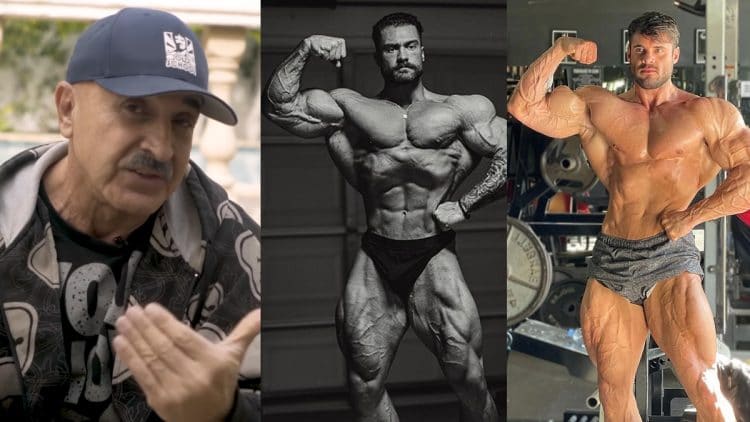 While he has long stepped away from competing, Samir Bannout made a huge mark on the sport of bodybuilding. Representing the Golden Era, Bannout reached the top of the sport in 1983, where he managed to win his lone Mr. Olympia title. Bannout was part of a new wave of athletes who focused more on muscle mass and size than detailed separation or aesthetics.

Enjoying retirement, Bannout still has a passion for the sport, but he believes the quality of competition isn’t what it used to be. Considering the heights he’s reached as a professional bodybuilder, certainly, his opinion bears a lot of weight in the community. Steroid cycles are an important aspect of the sport, and one of the more sensitive subjects present in bodybuilding.

Chris Bumstead, a three-time Classic Physique Olympia champion (2019-2021) was recently in the headlines after revealing his ‘decreased’ steroid cycle in preparation for 2022 Olympia. What surprised many in the community, was the fact that “C-Bum” insisted that he’s only taking two compounds during his off-season.

When he began in the sport, Bumstead remembered taking a ‘normal cycle’ consisting of around four to five compounds. Bannout believes the reigning champion deserves ‘a lot of credit’ because his physique is far from being blocky. Nevertheless, Bannout sees rising Classic Physique standout Logan Franklin giving the decorated champion a run for his money later this year.

Bannout on Logan Franklin’s Chances Against Chris Bumstead: ‘In the Long Run, He’s Going to Win It All’

Speaking in a recent interview, Samir opened up about the ‘intelligent planning’ that went into Logan Franklin’s current prep.

“Logan and I, we talk about things, but his coach is actually Milos [Sarcev]. Samir Bannout continued. “We talk about it a lot. We hang out in Texas; he was in California. We talk on the phone and always Facetime. I really help him more with posing but we talk about other topics too. Logan is really sane, he’s rational… thank god.”

With the help of Milos “The Mind” Sarcev, Samir Bannout explained that Franklin plans to add ‘five or six-pounds’ of quality muscle before December when he is expected to stand against Bumstead.

“From my perspective, from my experience, Logan right now, what he’s doing is very intelligent planning, where he is bringing his weakest body part up. I’m not going to talk in detail about it. He’s going to be doing some moves that are going to increase his lats and density in the back department.”

“If you look at Logan overall, he’s really not missing anything. So, I said Logan, I’m thinking, ‘five or six-pounds of purse muscle.’ And vastly continue to improve. The thing with Logan is he’s smart. He’s focused and he’s not going to do anything stupid I assure you of that, he’s not. Therefore, in the long run, I see that he’s going to win it all. I think he could.”

Bannout added that Franklin can improve his chances against Chris Bumstead at 2022 Olympia by bringing up his lats. This is a practice Bannout utilized effectively throughout his career, as well as legends like Dorian Yates and Ronnie Coleman.

“Well, he’s improving his lats the past week. He’s been doing more bent over rows. For a while he wasn’t doing it because he injured his lower back. Bannout said. “A little bit denser and a little bit thicker. The thing is, he’s improving everything evenly.

I suggested to Logan, since his back is hurting him, to go on a flat bench and do the movements similar with the weight lifted perpendicular, and he hit the lat. Something that I did a lot, Dorian [Yates] did a lot, Ronnie Coleman did a lot. And you can see, all the guys I’m talking about had a good back.”

Before switching gears, Bannout clarified that Franklin is in ‘good shape’ weighing in at 236-pounds.

Bannout is adamant that whatever Bumstead is doing, it’s working, which is evident by his title reign at Olympia over the past few years.

According to Bannout, Bumstead’s timing and ability to pose make him an even more versatile threat. He believes these are the reasons why he has been able to defeat Breon Ansley since dethroning him in 2019.

“That’s why he keeps beating Breon [Ansley]. Breon and I talked a lot about his posing. I only helped him one time. I can see that he can do something that would make a huge difference. But I think now he’s hanging out more in San Diego in a different area. It’s a little too far for me. I would love to help him out a little more, he would do great.”

After giving the reigning champion some praise, Bannout says that Bumstead deserves a lot of credit for maintaining his physique without looking blocky in the waist.

“Whoever is working with him [Chris Bumstead] or whatever he’s doing what he’s doing, I don’t see a sign of blockiness, or that Insulin look on his body. I give him a lot of credit.”

John Hansen questioned why Bumstead chose to release a video about his cycle.

“I saw the video, and wasn’t he saying something else? Like grams or something. It was almost like he was trying to disguise it for younger people.” John said. “Why do the video? I didn’t understand that.”

Bannout responded to his question, suggesting that perhaps someone asked Bumstead to reveal his cycle to his fanbase. While many have doubted Bumstead’s recent cycle, Bannout believes a physique of his caliber is possible with two compounds. In fact, Bannout said that seven-time Mr. Olympia Arnold Schwarzenegger was ‘at his best’ with just two compounds.

“He’s not going to discuss what he’s doing to people in detail.” Bannout continued. “Maybe someone asked him, maybe people asked him these kinds of questions and he had to reply.”

“Sergio Oliva didn’t take more than one or two [compounds]. Even Arnold [Schwarzenegger] at his best used two compounds. Trust me.” Bannout shared. “The bottom line is… he’s making improvements year after year. He’s gotten better. It’s better not to talk about it.”

Bannout was left impressed by Bumstead’s ability to make improvements year after year. Specifically, Bannout credits a lot of Bumstead’s success to his knack for hiding weaknesses while accentuating his strengths on stage. 2022 Olympia is scheduled for Dec. 16 – 18, in Las Vegas, where “CBum” intends to win his fourth straight title.

After a thorough discussion, Bannout sees Logan Franklin as a threat to Bumstead’s title in due time. In the end, Bannout doesn’t care how many compounds Bumstead is taking because whatever he’s doing is clearly working.