Samson Dauda weighs in at 330 pounds at the end of the off-season. 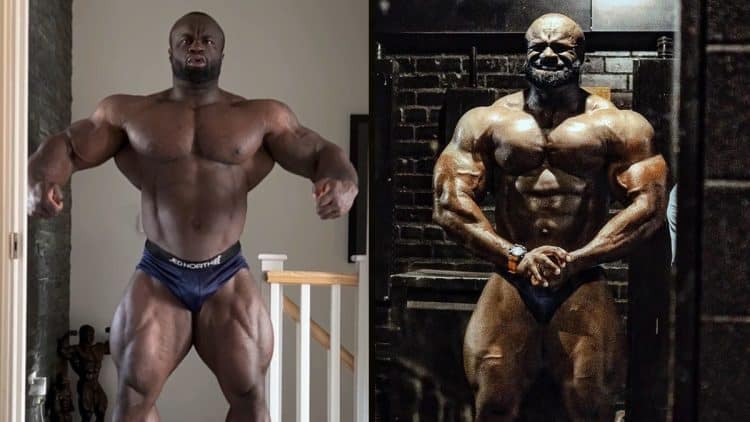 Bodybuilder Samson Dauda is staying busy in the gym and the kitchen as he adds more muscle mass to his monstrous frame. In his latest physique update on Instagram, Samson Dauda weighs 330 pounds after completing his off-season bulking and training program.

Samson Dauda first gained recognition as a Men’s Open standout last year. The division hosts some of the freakiest mass monsters and Dauda fits right in with his gigantic physique. He competed at two IFBB pro events in 2021, placing second at the 2021 Arnold Classic UK and getting the third spot on the podium at the Yamamoto Cup Pro.

Dauda was determined to bring an improved package to the 2022 Arnold Classic in Ohio. Before the competition, Dauda believed his lower body would be enough to edge out Brandon Curry, but recognized he had not stood next to him on stage. His memorable posing routine paying tribute to Kevin Lovren made rounds on social media.

Ultimately, Dauda could not get past Curry, who blew the competition out of the water to take home the top prize while Dauda placed fourth. He went on to compete at the 2022 IFBB Boston Pro and secured another fourth-rank placing.

Among the bodybuilders in the Men’s Open division, Samson Dauda is in the spotlight for many reasons. During the offseason, he has shown a consistently impressive physique and pushed just how far he can grow.

In a recent post shared on his Instagram, Samson Dauda revealed that he is tipping the scales at a massive 330 pounds (149.7 kg), just under four months out from the 2022 Olympia.  He and his team were aiming for this weight, but were uncertain if they could achieve it. However, they achieve this goal.

“Finally ending this off season at 330lbs, the exact number we hoped to hit but not for one minute did I really think I was really going to achieve it but @milossarcev had no doubt.”

Dauda informed his followers that he was finally wrapping up the off-season. It will likely be the heaviest we get to see him this year as he starts getting ready for the biggest stage in bodybuilding, the 2022 Mr. Olympia, scheduled for Dec. 15-18 at Planet Hollywood Las Vegas Resort & Casino.

In preparation for the 2022 Mr. Olympia, Dauda had recently partnered up with 2021 Arnold Classic winner, Nick Walker, and 212 Olympia champion, Kamal Elgargni, for a taxing session of high-volume back workouts.

Dauda and Walker followed Elgargni, who led the charge for a traditional bodybuilding workout, something the Libyan native is renowned for. If his physique update is any indication, Dauda looks set to bring his best version to this year’s marquee event.