Known for some of the best leg development in bodybuilding history, Platz looks back on the cycles he used during the height of his career. 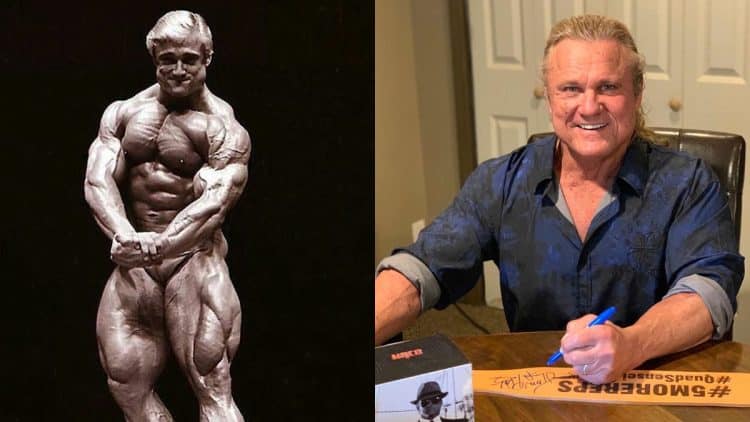 Bodybuilding veteran Tom Platz made a name for himself in the sport with a spectacular lower body and ironclad work ethic. In a recent interview, Platz reflected on his prime years of competition and discussed the measures he took to achieve what he calls the ‘drug look.’

In the early 1970s, Platz, who grew up in Detroit, began competing in AAU bodybuilding shows. The one thing that made Tom Platz famous wasn’t his titles or awards, but rather his varied and intensive workout regimen that has influenced many generations since then.

He transitioned from the AAU to IFBB after making an impression at Gold’s Gym. He won the prestigious Mr. Universe title in 1980.

Tom Platz’s strength and ability to push himself in the gym guided him to success in the IFBB Pro League during the 1970s and 80s. He has competed at a number of high-profile shows and has graced the prestigious Mr. Olympia stage eight times during his tenure. In addition, Tom has shared the stage with icons like Arnold Schwarzenegger and eight-time Mr. Olympia winner Lee Haney.

“The Quadfather” has long established himself as a pioneer of advanced leg training due to his unique techniques and straight-forward nature. In addition to his impressive bodybuilding career, Platz put his leg strength to the test multiple times throughout his life.

In 1992, he took part in a squat contest created to determine the strongest man at the WBF. In the end, Fred Hatfield won the competition, but it was described as a close contest. In time, a second contest called the Great American Squat Off took place and was held in Germany, where both men found success at the event.

He hung up his posing trunks following his last Olympia appearance in 1986, but his lower body strength never waned, even in his later years. Tom is highly regarded for his intense, high-volume workouts, which were a staple in his regimen back when he used to compete. However, according to Platz, it took a lot more than intense training to achieve the most shredded look of his life.

Tom Platz on Past Cycles: ‘There is Muscle I Could Only Acquire with Anabolics’

During the interview, Tom Platz described if he was able to maintain a shredded physique without the use of steroids.

“Pretty close. I got shredded within my own human terms but to achieve the drug look, the saran wrap finish — the vascularity like… it’s a drug look. Even if you want that drug look, nothing is going to do it except that small amount of drugs.” says Tom Platz

Platz added that two compounds were popular during his time in the sport.

“Winstrol and Dianabol was the drug of choice in the 70s, which held a lot of water. I thought, ‘this is stupid, I’m getting all bloated up from this stuff, you know,’ even then, five milligrams a day. The dosages were never there.”

“In bodybuilding… there’s a finish — a drugged look like saran wrap around the muscle that I could only acquire with a small amount of anabolic material, not androgenic.”

Tom believes a lot has changed since he was competing but said when he began steroids, he conducted a lot of research. Eventually, he found a pharmacist that helped him with drug prescriptions.

“Eventually, I found some doctors that it made sense to, and okay, we could administer this, you know. But I did do a lot of research first before I go and take something. It was all, ‘okay, I’ll write you a prescription.’ You go to the pharmacy.”

“I think I spent $300 getting ready for each Mr. Olympia. $300 total. Back then, it was probably like $75 getting ready for my state shows. Guys spend thousands of dollars nowadays. My entry fee was like $10, $5 to enter the contest. I don’t know how people do it. Tom said. “They spend so much money competing… it’s a different world.”

After winning his Junior Mr. Michigan title in 1975, Tom realized at 19 years old he could win without taking any steroids but would never achieve ‘the drug look,’ as he described. Following the contest, he decided to dabble with steroids at his next show, which happened to be the Mr. Universe contest.

In addition to discussing cycles, Tom gave his thoughts on never winning a Sandow trophy but seeing a bodybuilder as dominant as Lee Haney win eight.

“You don’t get your best all the time. There’s maybe one or two times during your career that you’re really on point. Tom said. “Now, a guy like Lee Haney, the symmetry — can win a lot more when they are out of shape a little bit. Small waist, circulating look but a guy like me… resembled a Rich Gaspari. Unless Gaspari entered the contest ripped with cross-striations — I had striations in my butt in 1975 but I just couldn’t show that.”

This isn’t the first instance that Tom Platz has suggested taking small amounts of gear. Earlier this week, the bodybuilding veteran said taking only two compounds worked for him and gave him longevity.

RELATED: Leg Day Motivation: Tom Platz “I Was Willing To Die For It”

Platz is adamant that steroids are the only way a bodybuilder can achieve that vascular saran wrap ‘drug look.’ While his techniques and training methods differ from today’s athletes, Platz respects and understands the way new school bodybuilders approach the sport.