Kamal Elgargni looked back on competing in the Middle East, winning the 2018 Arnold Classic, and shared how he stays healthy into his 50s 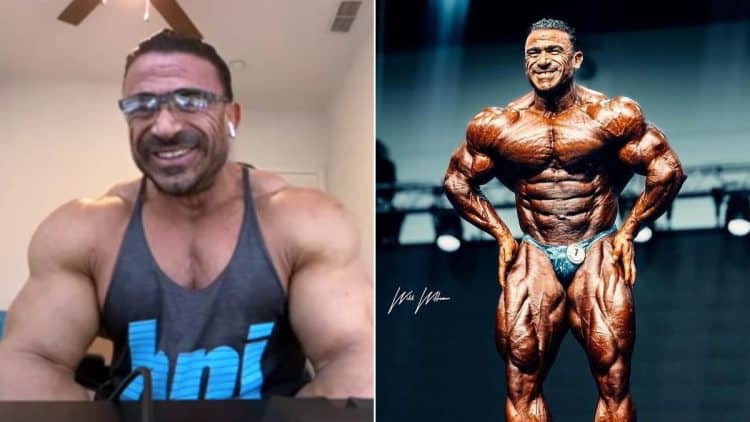 212 Olympia champion Kamal Elgargni is showing no signs of slowing down as he looks to continue his highly successful career. In an interview with Fouad Abiad Media, Elgargni reflected back on his journey in bodybuilding, talked about gear use, and shared how he stays healthy at the age of 50.

Hailing from Libya, Kamal Elgargni first gained popularity after winning his debut showing at the 2018 Arnold Classic. Elgargni boasts a well-balanced build reminiscent of the golden-era bodybuilders. Following the win, the 50-year-old went on to compete at the highest level, placing third in the 212 division at the 2018 Olympia.

Elgargi won his sole 212 Olympia title the next year in 2019 by edging out fellow division standouts and runner-ups, Derek Lunsford and Shaun Clarida. Kamal then took his incredibly aesthetic physique to the stages of the 2020 Olympia. Clarida returned for the show with vengeance and defeated Kamal to take home the prize while he got second place. Kamal tried his hand in the competition again the following year in 2021, but could not manage to beat Derek Lunsford, who won his first 212 Olympia title last year.

Last month, Elgargni made headlines when he announced his decision to participate in the Open three times over the next few months. For his first show, Elgargni placed second in his debut in the new class at the 2022 Tampa Pro. He competed again shortly after at the Texas Pro, getting fourth place, and had indicated a desire to wrap up with a showing at the Ronnie Coleman Classic.

50-year-old bodybuilder Kamal Elgargni reflects back on his career

In a recent interview with Fouad Abiad Media, Elgargni reflected back on his career. Having started his bodybuilding career in the Middle East before making his way to the west, Elgargni has experienced competing under different rulesets; some, where gear use may be encouraged and others where he needed to be fully clean. When asked about the drug testing in some of his early competitions, Elgargni expanded on what they were permitted to use.

“100 percent clean. So, what we do, we take fast acting stuff, for example, propionate, some tablets and we train hard. Do a lot of cardio. We are not allowed to take any diuretics, everything that goes is natural. But what we do, we do a test before. Actually, we go to the trial test before we go to the show. Make sure everything is fine, we are clean, and then when we go to show we know it’s clean and the top three every time they get tested.”

Although the shows required him to be 100 percent clean, Elgargni conceded that the athletes could use gear before the trial, but only if they could get it out of their system in time. As such, they would favor fast-acting substances over those that would stay longer in their body.

“Yes (taking a little bit of gear before), and making sure it’s out of my system. All gear, they’ve got a time limit that it stays in your system. For example, you can not touch deca, deca durabolin, it stays two years, forget about it. Maybe you start with a lit test at the beginning and that stays three months in your system. Then you finish, you start with whatever change it to properly and then you take other bits and boxes. You need to know exactly there is over all details that is there you can find and then you do it.”

As someone who lived through the Libyan revolution early in his life and suffered the consequences of opposing the old regime, winning his first pro show in America and having Arnold present the trophy to him marked a moment in Elgargni’s life that he would never forget.

“For me as a first pro show to win and get Arnold to bring the trophy to me even if you see one direction to me, I was looking at him (upwards) was really crazy, I was like, ‘oh my god!’ It felt really, it’s unbelievable. With my career and whatever I did and then you come to the Arnold, just like, oh man it’s unbelievable.”

Given the recent surge in the deaths of bodybuilders over the last two years, gear use has come under the microscope of the community. Elgargni had previously shared that he always liked to use the minimal gear. He credits getting regular blood work done to make sure he was healthy.

“I do blood work mostly nearly every three months, every six months probably. Plus, if I travel, sometimes we travel a lot, for example, I did one in the UK and then I got invited to Turkey. Then, these guys that invited me, they are involved with the clinics and all this medicine and that. They said, ‘Kamal, do you want to get blood check up, blood work and everything?’ I said, ‘yeah, of course.’ So just did one after maybe a month, then another one.

“When I have a chance to do something like that, yeah I’m going to do it. I do my blood work all the time. I’ve always been thankful, always been fine. I’ve never had any issues.”

Recently, Kamal Elgargni joined forces with 2021 Arnold Classic Champ Nick Walker for traditional high-volume shoulders and biceps workouts. They worked on enhancing their strength by using compound and isolation movements in an insane routine that is sure to get your muscles pumping.

You can watch the full interview below: