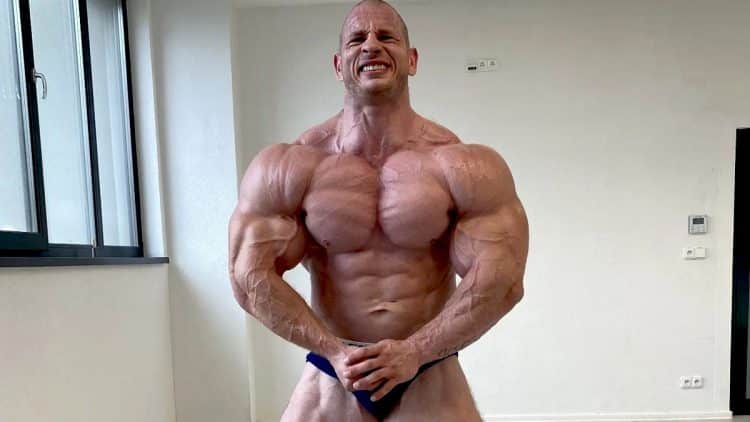 Krizo dominated in the IFBB Elite Pro League before making the switch to the NPC last month, which effectively kickstarted his campaign for 2022 Mr. Olympia. The mass monster from Slovakia impressed a number of legends while touring North America. He visited bodybuilding’s east coast mecca at the Bev Francis Powerhouse Gym, located in Syosset, New York as well as Flex Lewis‘ famous Dragon’s Lair gym, in Las Vegas, Nevada.

At the Dragon’s Lair, Michal Krizo posed in the company of respected coach and bodybuilder Milos Sarcev. Days after, Krizo got the chance to show his physique to four-time Mr. Olympia Jay Cutler. From Cutler’s point of view, Krizo will be a problem for a lot of top competitors in the Open class. Moreover, the bodybuilding legend assured his followers that Krizo is the ‘real deal’ and can easily earn his qualification for Olympia in the coming months.

As of this writing, Krizo’s intention is to earn a pro card in the NPC before winning a pro show in the IFBB Pro League. Once he accomplishes that, the bodybuilder plans to bring his best package possible to the 2022 Mr. Olympia contest, which is scheduled to take place from December 15th-18th in Las Vegas later this year. With his eyes fixated on an Olympia invitation, Krizo is back sharing another wildly impressive physique update.

In a recent post made to Instagram, a 293-pound Krizo shared the gains he’s made so far this season.

Even though Krizo has yet to earn his pro card, he has the weapons to stand next to some of the best in the IFBB Pro League. Reigning two-time Mr. Olympia Mamdouh ‘Big Ramy’ Elssbiay shared a massive update last week and garnered headlines after showing off his lean build at a staggering 337 pounds. Given Krizo’s muscularity and size, many already believe he would be in the first call-out if he made it to the Olympia stage this year.

Veterans continue to acknowledge Krizo’s potential in the IFBB Pro League. 1983 Mr. Olympia Samir Bannout suggested that Michal currently has no weaknesses. He added that if Krizo comes to the Olympia in condition, he ‘guarantees’ he will crack the top three at the prestigious contest. In addition, Bannout believes Krizo has bigger arms and a better v-taper than rising star Nick Walker.

Australia’s Lee Preist also gave his thoughts on Krizo’s physique compared to Walker’s. He agreed that the Slovakian bodybuilder has a ‘crazy’ look but said he still favors Nick’s build in the end.

Krizo isn’t the only competitor from the IFBB Elite Pro League to make the NPC switch. His teammate, Adela Ondrejovicova, also made the transition and her success earned her the opportunity to compete against other pros. She won the Figure title at the 2022 Finland Pro recently and secured her invitation to compete at 2022 Olympia.

Last December, bodybuilder ‘Good Vito’ Vitaliy Ugolnikov made his move out of the IFBB Elite Pro League as well. Vito’s plan is to earn his pro card in September, before considering Olympia aspirations. Good Vito showed off some of the gains he’s made this season after revealing his weight of 275 pounds. Similar to Krizo, a lot of hype surrounds Good Vito as many are curious how he will fare against elite talent.

RELATED: Seth Feroce: Open Bodybuilding Will Be Gone in 5 Years

The Men’s Open landscape continues to take shape for this year. If Krizo manages to earn his invite to 2022 Mr. Olympia, his blend of size and aesthetics will make him an imposing threat on stage.