'The Giant Killer' is leaving no stone unturned to win back his 212 Olympia title. 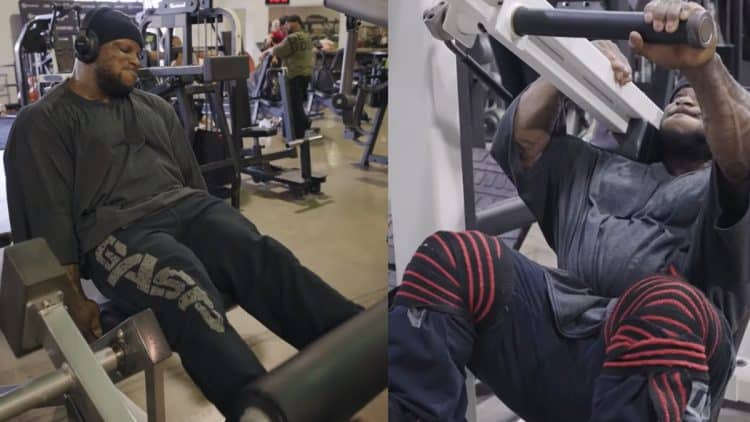 Shaun Clarida is a 212 division competitor in the IFBB Pro League who recently made a foray into the Open division. Winning the 212 division crown at the 2020 Olympia marks the biggest achievement of his career. Following a title loss at the hands of Derek Lunsford that resulted in a runner-up finish at the 2021 Olympia, the 39-yr-old made a bold switch to the Open division.

At five-foot-two, Clarida is shorter than most Open division bodybuilders, and his chances of success in the division were questioned when he initially let his intentions about making the switch known. However, Clarida proved everyone wrong and won his divisional debut at the 2021 Legions Sports Fest Pro.

Clarida started his competition prep for the 2022 Mr. Olympia a few weeks ago and will attempt to wrestle the title back from Lunsford when Olympia returns to its home in Las Vegas for the first time in three years. The event is scheduled to take place from Dec. 15 to 18. Clarida went through a punishing leg day workout with Swedish bodybuilder Ashkan Aghili as a part of his competition prep. The video of this session was uploaded on his YouTube channel.

The Giant Killer started his workout with this exercise to warm up the hamstrings and knee joints. Warming up the knee joint is crucial for avoiding injuries during leg days. The seated leg curl is an effective way to warm the knees up without putting them under a lot of stress.

Clarida performed a few sets of this exercise with moderate weights and controlled motion. For the last set, he performed partial (half) reps to failure and held the position at the bottom of the last rep to keep the muscles under tension for longer.

This served as the second warm-up exercise of the day, targetting the quads and knees. While explaining the reasons for taking time to warm up all the major muscle groups in the legs, Clarida said:

He got a few good sets of leg extensions under the belt. The warm-up sets filled Clarida’s muscles with blood, and he felt comfortable moving onto the working sets.

This is one of Clarida’s favorite lower body exercises to work the quads. The Giant Killer did the exercise on a Paramount Pendulum squats machine.

As he worked his way up in weight through the working sets, Clarida used knee wraps and a lifting belt for the last few sets to ‘really earn those reps’. He performed three heavy sets of eight to ten reps and moved on to the next exercise.

Clarida stated that he had not done this exercise in years. However, he likes to use the machines he knows are good and rare whenever he travels.

The 39-year-old placed his feet shoulder-width apart, and his heels were hanging slightly outside the foot platform to add extra flexion in the knee and force more blood into the quads.

After the warm-up sets, Clarida set a goal to perform 15 to 20 reps in each set with eight plates.

“We’re already warmed up so we’re going into four plates (on each side) right away. The goal is to get 15 to 20 reps. If you get more, go for it. But in my mind, anything less than 15 reps is a failed set,” Clarida said to Aghili.

Clarida’s leg workout came full circle as he started the session with a hamstring movement and finished it with an exercise to target the back of his legs. Dumbbell stiff-leg deadlifts served as the finisher to Clarida’s leg day workout.

Clarida intends to create history by competing in both 212 and Open divisions at the 2022 Olympia. However, he is yet to get the nod from the Olympia management to realize his dream. But if he chooses to stay in the 212 division, Clarida will face a stiff challenge from the reigning champion Derek Lunsford and Kamal Elgargni.