Discover how Kate Hudson lost 70 pounds to regain her pre-pregnancy body and carve one of the most athletic female physiques in Hollywood. 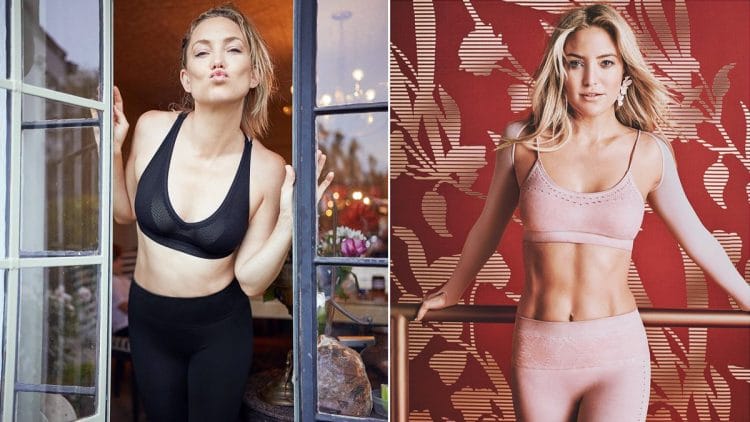 Kate Hudson is one of the most bankable actresses in Hollywood. She is well-known for her athletic figure. But it wasn’t always like that. After giving birth to her second child, Kate found herself 70 pounds overweight. Yet, 18 months and many workouts later, she was back to looking tight, toned, and terrific.

Read on to find out how she did it.

Kate Garry Hudson was born on April 19th, 1979, in Los Angeles, California. She is the daughter of Oscar-winning actress Goldie Hawn and actor and musician Bill Hudson.

The couple divorced when Kate was 18 months old when Goldie took up with Kurt Russell. Kate was raised in Colorado and Pacific Palisades, California. She was raised Jewish and practices Buddhism.

In 1997, Kate graduated from Crossroads College in Santa Monica, California. Rather than going to University, she chose to pursue an acting career. She made her film debut in 1998s Desert Blue. In 2000, she appeared in the romantic comedy 200 Cigarettes. In 2000, she appeared in three movies, including playing the female lead in the rom-com About Adam.

Kate’s breakthrough role was in Cameron Crowe’s Almost Famous, for which she won the Golden Globe for best supporting actress. In 2003, she starred opposite Matthew McConnaughey in How to Lose A Guy in 10 Days. Throughout the remainder of the 2000s, she starred in a number of successful movies, including 2006s You, Me and Dupree, which took in $130.4 million at the global box office.

In 2007, Kate moved behind the camera when she directed the short film Cutlass. The film starred her step-father Kurt Russell. In 2010, she began appearing in independent films. Then, in 2012, she won the role of a dance teacher in the TV series Glee. In 2016, she voiced a character in Kung Fu Panda 3. In that same year, she starred in the successful drama Deep Water Horizon, based on real-life events. In 2021, she received her second Golden Globe nomination for her portrayal of Kazu Gamble in the movie Music.

In 2013, Kate launched her own line of workout wear, Fabletics, and has 25 stores across the US. She has also authored two books.

In December 2000, Kate married Chris Robinson, the frontman for the band The Black Crowes. They welcomed a son in January 2004. The couple divorced in 2007.

Hudson announced her engagement to Matt Bellamy, frontman for the band Muse, in April 2011. Their son, Bingham, was born three months later. However, in December 2014, the engagement broke off.

In December 2016, Kate began a relationship with musician and actor Danny Fujikawa. In October 2018 she gave birth to a daughter, Rani Rose Hudson Fujikawa. The couple announced their engagement in September 2021.

After the birth of her second child in 2011, Kate gained 70 pounds of extra weight. She was determined to lose the weight but equally determined not to go on a restrictive diet.

Kate continued to eat between 1500-1800 calories each day through her post-pregnancy weight-loss period. That did not prevent her from losing the whole 70 pounds and ending up with one of the most athletic female physiques in all of Hollywood.

Carb cycling was key to Kate’s weight loss success. On top of that, she worked out nearly every day, but we’ll get to that shortly. Kate was very particular about the types of carbs she ate and focused on low glycemic foods that would not spike her insulin levels.

Kate has a genetically slow metabolism. As a result, she took extra steps to boost her metabolism, including eating foods and herbs that contained capsaicin, a proven metabolism booster. Her favorite was cayenne pepper.

Kate included a quality source of protein in every meal. Protein has the highest thermic effect of the three macronutrients. The thermic effect is the calorie cost to digest food.

Kate got most of her carbs from vegetables and fruits. She would only allow herself to indulge in a high glycemic carb treat immediately after a workout. The actress knew that the extra glucose from the carbs would go directly into her muscle cells to replenish the glucose used up in her workout.

She cut out high complex carb foods such as bread, pasta, and grains from her diet. Kate was also recommended a metabolism-boosting supplement, which she took daily.

Must Read: A Complete Guide to Understanding Thermic Foods: Eat to Rev Up Your Metabolism!

Here’s how Kate ate on a typical day during her post-pregnancy weight loss journey. This meal plan works out to just over 1,700 calories, which was the average that Kate consumed during her weight loss period.

Kate will be the first to admit that she became quite depressed with the weight she put on after the birth of her second child. But when she set her mind to losing the extra 70 pounds, she was all-in.

Kate hired a celebrity personal trainer to help her get back into shape. The two of them decided on some foundational training principles:

Here is an overview of what a typical training week looked like for Kate:

Each of these ab exercises was done for 25 reps, and Kate completed two rounds of the circuit.

On these days, Kate focused on resistance training to shape and strengthen her muscles. Each workout would consist of a dozen exercises. She alternates between upper body and lower body days.

Kate Hudson’s transformation from frumpy to fantastic after the birth of her second child is an inspiration for all moms. Follow Kate’s lead and use her training and nutrition program to sculpt your dream figure.

Pump Up Your Pecs With This 30-Minute Chest Workout