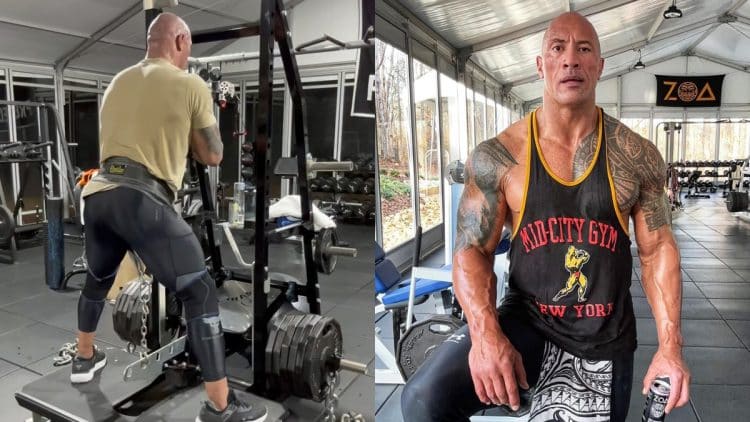 Dwayne ‘The Rock’ Johnson is known for his motto of being the hardest worker in the room and never fails to disappoint. In a recent post made on Instagram, The Rock shared a grueling late-night workout using belt squats to maximize lower body gains.

The Rock is one of the most popular celebrities on the planet and boasts a massive following of 360 million on Instagram. He first gained attention as a pro wrestling superstar during the ‘Attitude Era’ of the WWE. He found his passion for acting after enjoying a successful career in the wrestling ring.

He recently made headlines for his jacked physique in the DC feature film, Black Adam. Johnson packed on the pounds to portray the burly superhero. He gave a look into his preparations for the role by showing off his gigantic quads in an intense leg workout. He performed a circuit of brutal step-up exercises to tax his lower body.

Johnson boasts one of the best builds of any actor in Hollywood. He joined forces with NFL player Aaron Donald for an intense ab wheel rollout training session at the LA Rams’ gym. They got along well and partnered up for another workout a few weeks later. The pair started their second training session with a brutal one-arm dumbbell bent over rows superset suggested by Donald.

The 50-year-old never shies away from testing his strength. Johnson motivated his fans with another challenging leg day workout consisting of five killer sets that he utilized at the end of the training session.

In a recent Instagram post, Dwayne ‘The Rock’ Johnson shared a grueling late-night training session to get massive legs.

“Late night grind.
Legs.
4 giant sets ending with 15-20 reps (or til failure) of belt squats.
Giant sets = 4 rounds of 4 exercises back to back w/ no rest between exercises.
Rest period between sets no more than 90 seconds.

Push yourself for a 3-5 count negative and always control the weight.

Burn is incredible.
Legs completely on 🔥
Give yourself a silent 👏🏾 at the end 🤣” The Rock wrote.

After a tough week of work, The Rock likes to reward himself with some epic cheat meals. About four months ago, social media fitness influencer Will Tennyson tried out some of Johnson’s craziest cheat meals for five weeks and reported positive results.

Considering how insanely jacked he is, Johnson’s physique has drawn speculation about potential steroid use. UFC color commentator Joe Rogan called on The Rock to come clean about his use of steroids in a show of honesty.

The Rock will grace the movie theaters alongside actor JK Simmons in the upcoming film Red One, scheduled for release in 2023. The film is currently in production, and many expect its release later this year.